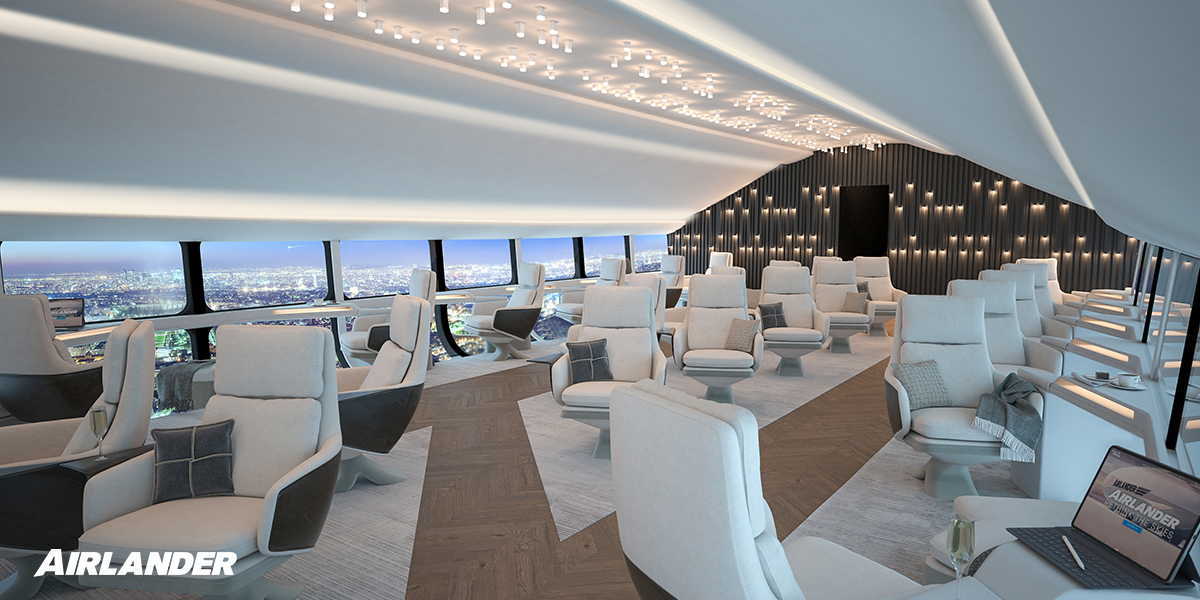 Could airships be the future of short-distance air travel? Hybrid Air Vehicles (HAV), a company based in Bedford in the UK, believes so. Using the slogan ‘Rethink the skies’, they argue that using environmentally friendly airships for short distance journeys could cut flying’s CO2 emissions by 90% and have unveiled short-haul routes such as Liverpool-Belfast which the company hopes to serve by 2025.

84 years after the Hindenburg disaster put an end to the original airship era, HAV has developed a new environmentally friendly commercial 100-passenger airship, the Airlander 10, and announced the routes the company hopes to serve from 2025. These include Barcelona to Palma de Mallorca in four and a half hours, Liverpool to Belfast in five hours and 20 minutes, Oslo to Stockholm in six and a half hours and Seattle to Vancouver in just over four hours. According the the HAV website, ‘Airlander 10’s spacious cabin gives every passenger a comfortable seat with direct access to the aisles. The floor-to-ceiling windows are a focal point, providing passengers with incredible views and natural light.’

According to HAV, the airship journeys would take around the same time as aeroplane travel once getting to and from the airport is taken into account, however they would be a more environmentally friendly option. The airships generate a much smaller carbon footprint than aeroplanes and the company calculates that the CO2 footprint per passenger on its airship would be about 4.5kg compared with about 53kg via jet plane. HAV states that its aircraft is ‘ideally suited to inter-city mobility applications like Liverpool to Belfast and Seattle to Vancouver, which Airlander can service with a tiny fraction of the emissions of current air options’.

The journey will offer incredible views and reduced emissions.

Airlander is suited to linking city pairs like Oslo and Stockholm – where would you like to go on Airlander?https://t.co/UsYuV0fDUN#AirlanderInterior #Mobility #RethinkTheSkies pic.twitter.com/Ui2yncuOM6

Tom Grundy, HAV’s chief executive, compares the Airlander to a “fast ferry”. Explaining that 47% of regional aeroplane flights connect cities less than 370km apart and emit huge amounts of carbon dioxide, he said, “This isn’t a luxury product it’s a practical solution to challenges posed by the climate crisis.” Grundy added that, “We’ve got aircraft designed to travel very long distances going very short distances, when there is actually a better solution”. “How much longer will we expect to have the luxury of travelling these short distances with such a big carbon footprint?” Stating that from 2025 the hybrid-electric Airlander 10 could do these shorter journeys whilst emitting only 10% of the carbon footprint, Grundy also suggested they would produce even smaller emissions in the future as it is hoped the airships will to be all-electric powered. “It’s an early and quick win for the climate,” he said, “Especially when you use this to get over an obstacle like water or hills.”

HAV said that they are in discussions with several airlines regarding operating the routes, and are expected to announce partnerships and airline customers in the next few months. They have already signed a deal with luxury Swedish travel company OceanSky Cruises to deliver an airship which will offer “experiential travel” over the North Pole with Arctic explorer Robert Swan. According to Grundy, HAV is nearly settled on a location for its airship production line, which he hopes will be in the UK and will aim to produce about 12 airships a year from 2025 onwards. He said the company would hire about 500 people for building whilst it would also support a further 1,500 jobs in the supply chain. Currently they have about 70 employees, mostly in design, at their office in Bedford. Originally designed as a surveillance vehicle for intelligence missions in Afghanistan, HAV claims independent estimates value the airship market at $50bn over the next 20 years and the company aims to sell 265 Airlanders over that period.

The cabin designs give a glimpse of what the Airlander 10 mobility cabin could look like. Every customer will design an interior to suit their own brand and needs. https://t.co/UsYuV0fDUN#AirlanderInterior #Mobility #RethinkTheSkies pic.twitter.com/FiKaz3RpTc

Regarding the technical aspects of the craft, there is still some progress to be made. The £25m Airlander 10 prototype undertook six test flights, however some of these were not very successful. The prototype crashed in 2016 on its second test flight, after a successful 30-minute maiden trip. According to a tweet from HAV about the test, “Airlander sustained damage on landing during today’s flight. No damage was sustained mid-air or as a result of a telegraph pole as reported.” The aircraft is able to take off and land from almost any flat surface and reached heights of 2,100m and speeds of up to nearly 93 kmph during its final tests. So far HAV has received funding from individuals as well as UK government backing and grants from the European Union.