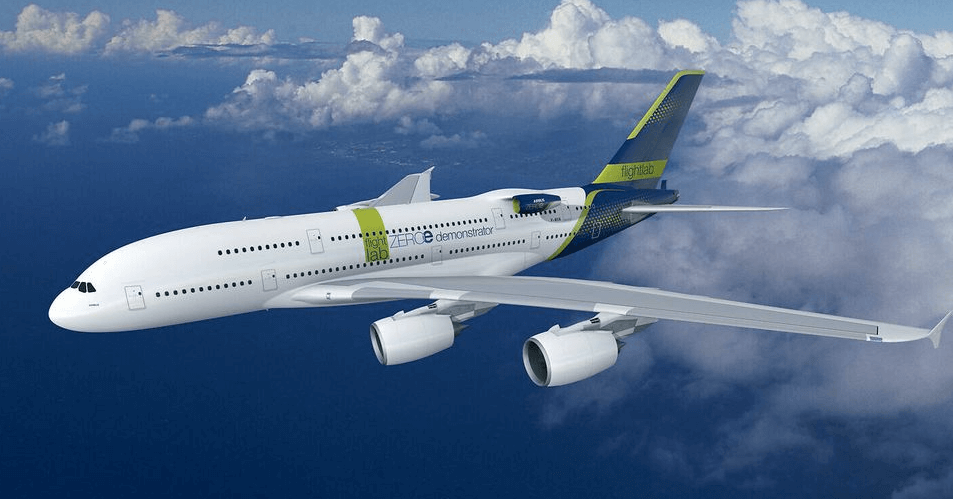 Airbus is betting on the use of hydrogen and has just announced that it will begin developing the technology to have its first aircraft in service by 2035. A “zero-emission aircraft” will be equipped with new engines that will use hydrogen as fuel, not hydrogen cells that produce electricity.

The program’s objective is to ground and flight test a direct combustion engine fueled by hydrogen, in preparation for entry-into-service of a zero-emission aircraft by 2035. The demonstration will use a A380 flying testbed equipped with liquid hydrogen tanks prepared at Airbus facilities in France and Germany. Airbus will also define the hydrogen propulsion system requirements, oversee flight testing, and provide the A380 platform to test the hydrogen combustion engine in cruise phase.

This is the most significant step undertaken at Airbus to usher in a new era of hydrogen-powered flight since the unveiling of our ZEROe concepts.

Airbus has long been exploring hydrogen as a substitute for fossil fuel to create zero-CO2-emission aircraft, which the company calls ZEROe. But that exploration – which resulted in a series of concepts announced in 2020, ranging from conventional aircraft to integrated air frame planes similar to American B-2 bombers – has not materialized into a program with a concrete commercial goal until now.

According to Airbus, the hydrogen aircraft will not use hydrogen cell or fuel cell technology, which produces electricity through a chemical process that combines hydrogen and oxygen, creating pure water as the only waste.

The company will work with a company called CFM International – a 50/50 partnership between General Electric and Safran Aircraft Engines – to modify “the burner, fuel system and control system of a GE Passport turboprop to run on hydrogen.” The European multinational says in its press release that the engine is being assembled in the United States and “was selected for this program due to its physical size, advanced turbo machinery and fuel flow capability.”

Hydrogen combustion capability is one of the foundational technologies we are developing and maturing as part of the CFM RISE Program.

Unlike electric cars and trucks, the operation of medium and long-haul aircraft with batteries is impossible due to the low energy density of this technology. The weight of the batteries is too great to compensate for the energy they provide for the aircraft’s flight.

Other companies want to launch fleets of small, short-haul aircraft that will use batteries. United Airlines, for example, will use battery-powered aircraft from Sweden’s Heart Aerospace for short-haul flights and very few passengers using the ES-19 aircraft. The 19 is for the 19 passengers. The Swedish aeronautical company based in Gothenburg claims that its range is 400 kilometers but will improve with the passage of time and new battery technologies.

According to United, this fleet could start operating in 2026, an optimistic target. But, for large short, medium and long-haul passenger and freight transport, the use of current batteries is absolutely impossible and hydrogen is the only option, as Airbus points out.