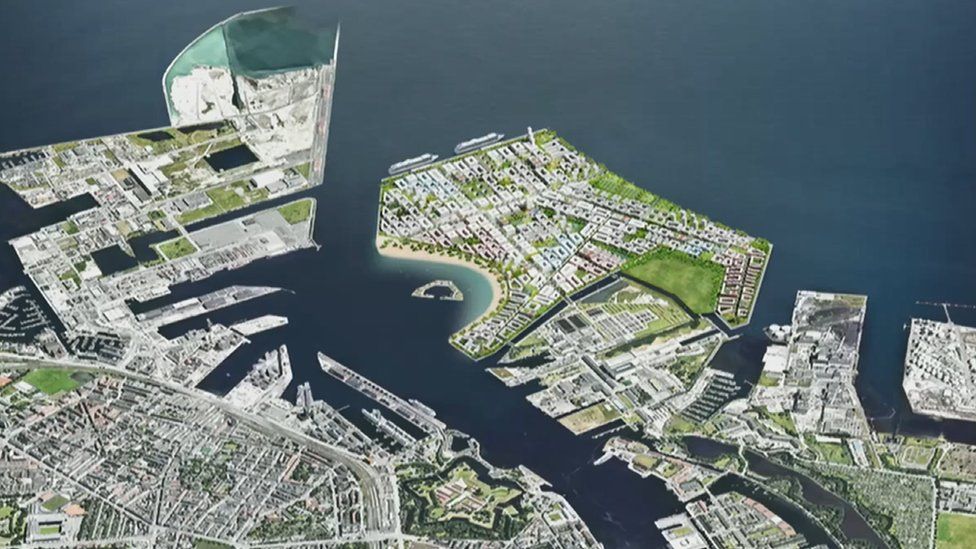 A giant artificial island will be built off Copenhagen

The Danish government has approved plans to build a giant artificial island off the country’s capital city of Copenhagen. The island, named Lynetteholm, will house 35,000 people and protect the port of Copenhagen from rising sea levels.

The planned island will cover 2.6 sq km and will be connected to the mainland via a ring road, tunnels and a metro line. The project is due to begin later this year, and the plans include a dam system around Lynetteholm’s perimeter with the aim of protecting the harbour from rising sea levels and storm surges. Provided construction goes ahead as planned, it is expected that most of the island’s foundations should be in place by 2035 while the project should be fully completed by 2070.

However, the Lynetteholm project faces opposition from environmentalists who are concerned about the impact of its construction, and environmental groups have brought a case against the development before the European Court of Justice. One of the concerns is regarding the transportation of materials by road, which will involve large numbers of vehicles, with one environmental assessment suggesting that there will be up to 350 lorry journeys a day through Copenhagen required to deliver the raw materials once construction has begun. Meanwhile local media report that the construction of the artificial island, equivalent in size to about 400 football pitches, would require around 80 million tonnes of soil to be delivered to the area in order to create just the peninsula. Another environmental concern is the movement of sediment at sea and the possible impact of this on ecosystems and water quality.

Danish broadcaster DR reported that as the bill passed on Friday with a majority of 85 in favour and 12 against, protesters gathered outside the parliament building in Copenhagen. According to the broadcaster, demonstrator and Copenhagen local Eva Larsen said she was “very worried” about the prospect of construction lorries passing through the city on a daily basis. Meanwhile protester Nicholas Woollhead feels that a decision on Lynetteholm should not have been made before local elections in November. He said, “This project, which is the largest in Copenhagen’s history and one of the largest infrastructure projects in Danish history, is simply pulled down over our heads between election periods where we do not have a chance to be heard”. However Carina Christensen, head of the association for the Danish road transport of goods (IDT), argued that using more “climate-friendly” transport when delivering construction materials was an option, although it would require approval from government officials. She said, “Electric trucks will, for example, remove CO2 emissions and reduce noise, but in return cost more and lead to more trips”.