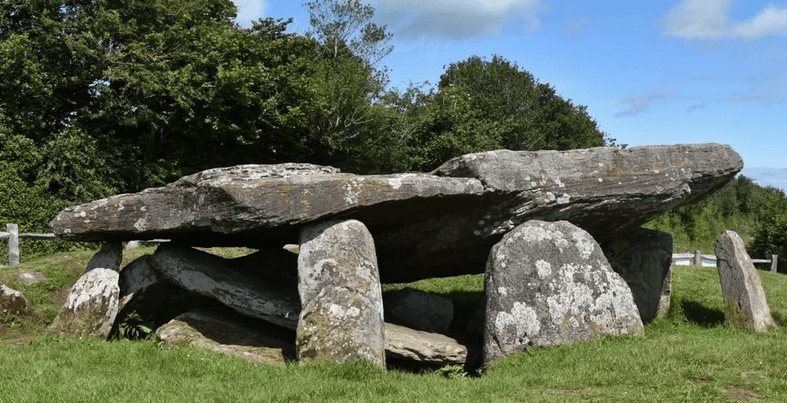 5,000-year-old tomb linked to King Arthur is being excavated for the first time

Archaeologists from the Universities of Manchester and Cardiff have begun an excavation of a 5,000-year-old tomb that for centuries has been believed to be linked to the legendary King Arthur. The aim is to shed light on some of the mysteries surrounding the enigmatic site in Herefordshire, England.

Arthur’s Stone, dating from around 3,700 BC, sits on a lonely hill outside the village of Dorstone, facing the Black Mountains of southeast Wales. It is a Neolithic chambered burial site that has never before been investigated. English Heritage, which manages the site, has explained that similar examples have been found in the same region containing incomplete skeletal remains of several people.

Today only the large stones of the inner chamber of Arthur’s Stone remain in view, which is set in a mound of earth and stones whose original size and shape remain a mystery. The chamber is made up of nine upright stones, with a huge angular rock at the top estimated to weigh over 25 tons.

This is not the first historical monument linked to King Arthur. Legend has it that the mythical warrior, ruler of Camelot, faced a giant in this place in Herefordshire who, at the moment of falling mortally wounded, collided with his elbows against one of the monoliths.

More recently, the medievalist and writer C.S. Lewis was inspired by the area to create part of his fictional world of Narnia. Arthur’s Stone would have served as an example to create the stone table on which Aslan is sacrificed in “The Lion, the Witch and the Wardrobe.”

Experts and amateurs are working side by side to remove turf from the surface to expose and record particularly sensitive archaeological remains. Researchers from the Universities of Manchester and Cardiff were already working in 2021 on the southern area of the monument.

It was assumed that Arthur’s Stone was located within a wedge-shaped stone mound, similar to those found in the Cotswolds and South Wales. But Professors Julian Thomas and Keith Ray, who are also leading this campaign, discovered that the monument originally extended to the southwest, and may have taken the form of a mound of stacked turf supported by a palisade of upright posts.

The imposing tomb is further linked to the nearby “halls of the dead” discovered in 2013. The initial mound points to the top of nearby Dorstone Hill. However, the final avenue of postholes, along with the two stone chambers and the upright rock align on the distant horizon with the gap between Skirrid and Garway Hill to the southeast.

“The different orientations of the two construction phases are significant because our excavations at Dorstone Hill in 2011-19 revealed three long mounds similar in construction to the one now known to represent the first stage of Arthur’s Stone,” said Professor Thomas. “Each of these three turf mounds had been built on the footprint of a large wooden building that had been deliberately set on fire. Therefore, it has now been identified that this tomb is closely related to the nearby ‘halls of the dead.’”