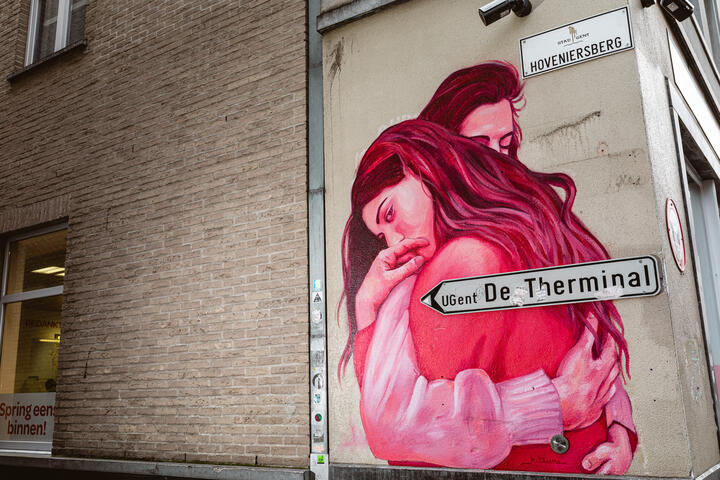 Flanders, one of Belgium’s three official regions, has been leading European society since the Middle Ages. Important medieval cities and ports contributed to its refined culture, with achievements in the Arts to make Italy blush. As a result, the region is a magnet for art lovers who come to see museums filled with Old Masters and rare treasures, to follow street art trails that celebrate free-thinking and creativity, and to gaze at romantic Dutch-gabled skylines that are works of art in themselves. So where should you head for? Here are some top tips from a confirmed Belgaphile to help you make the most of your time in Flanders.

1. Charm and modernity in Ghent

Ghent is one of the best-loved Flanders cities, combining historic charm with real-life modernity. The Sorry Not Sorry street art trail will take you down Graffiti Street and across the city, flaunting a rich inventory of street art and creators, including the ‘Banksy of Belgium’, street artist ROA. Known across the globe and yet mysteriously anonymous, ROA is in fact a son of Ghent, so what better place to discover his style – often in greyscale and marked by an obsession with animals. His thought-provoking murals often reveal the inner workings of the animal kingdom, like bones and organs, and so explore themes such as life, death, and the afterlife.

You could say that ROA shares DNA with the Van Eyck brothers, whose Mystic Lamb or ‘Ghent Alterpiece’ is exhibited in St Bavo’s Cathedral. With its surreal glow and spell-binding eyes, the Lamb is among the most influential artworks ever created. And for crime and mystery fans like me, the 1934 theft of two of its panels remains one of the most intriguing art heists in history.

Arguably the hidden gem of Flanders, beautiful Mechelen is embracing that identity with the Hidden Gems exhibition at the Renaissance palace Hof Van Busleyden. Never-before-exhibited masterpieces from private collections and works from seven centuries and disciplines such as goldsmithery and print-making have been brought together in a virtual cityscape.

By showing your free copy of the Hidden Gems city map (available at the exhibition or the tourist office) you can knock 2 euros off the price of St Rumbolds Tower, where there’s a 97-metre skywalk. (And even better, stay the weekend in Mechelen in December and January and receive 100 euros spending money).

Meanwhile, nature lovers should not miss the Animalinas Route, where classically-trained Belgian street artist Dzia honours the flora and fauna of Rivierenland – a mystical area of rivers and marshland just outside the city.

3. Leuven, the heart of Belgium

Cobbled streets buzz with students thanks to a world-famous university, and an ancient convent is watched over by an absolutely gob-smacking Gothic town hall. Leuven is quite simply gorgeous – and being at the heart of brewing country, has an excellent beer scene. But before you hit the restaurants, bars and breweries, take time to discover why The Louvre has partnered with MLeuven to bring you Alabaster. 130 glowing alabaster masterpieces from the 14th to 17th centuries have been curated to tell the story of the Low Countries unique relationship with this most luminous and tactile of materials. And modern-day Belgian artist Sophie Muller continues this tradition, with works exploring the contrasts between the raw and polished rock.

With its port on the River Scheldt, the largest city in Belgium by area is known for its openness, fashion, and its design culture. There’s so much to see and do in Antwerp, it’s well worth considering getting an Antwerp Card, for free access to 16 museums, 3 historic churches, 3 attractions, and up to 25% discounts. Just one highlight is Rubens House and workshop. Usually considered the most influential of Baroque painters (and holding 4th and 5th places on the list of highest-value auctioned Old Masters) Rubens ran his workshop here in Antwerp. See the place where this great man worked and lived with his family for 25 years, but do it quickly! In January 2023, Rubens House closes for a four-year renovation. To help you get there in time, Thursday night offers late night access.

Once Europe’s wealthiest city, Bruges is a living showcase for centuries of architectural styles that really must be seen to be believed. 12th-century St John’s Hospital, comprising some of Europe’s oldest surviving hospital buildings, lies at the heart. Now an art venue, its history of caring is brought to the fore by current exhibition ‘Face to Face with Death’. It might sound macabre, but don’t worry, the atmosphere in St John’s is wonderfully serene.

The Death of the Virgin by Hugo van der Goes is in more ways than one the centrepiece of this exhibition. Created in the 1470s, it shows how all the apostles were miraculously brought together around the pale-faced, blue-robed Mary’s deathbed. Newly restored, it’s now on display to the general public for the first time.

Like the apostles, a team of present-day creatives have been miraculously brought together as well, in dialogue with Hugo van der Goes. I’m particularly excited by the contribution of Anne Teresa De Keersmaeker, my favourite choreographer and founder of the world-renowned Belgian dance company Rosas. Bruges may be famously historic, but like the rest of Belgium, it certainly knows how to do modernity too.