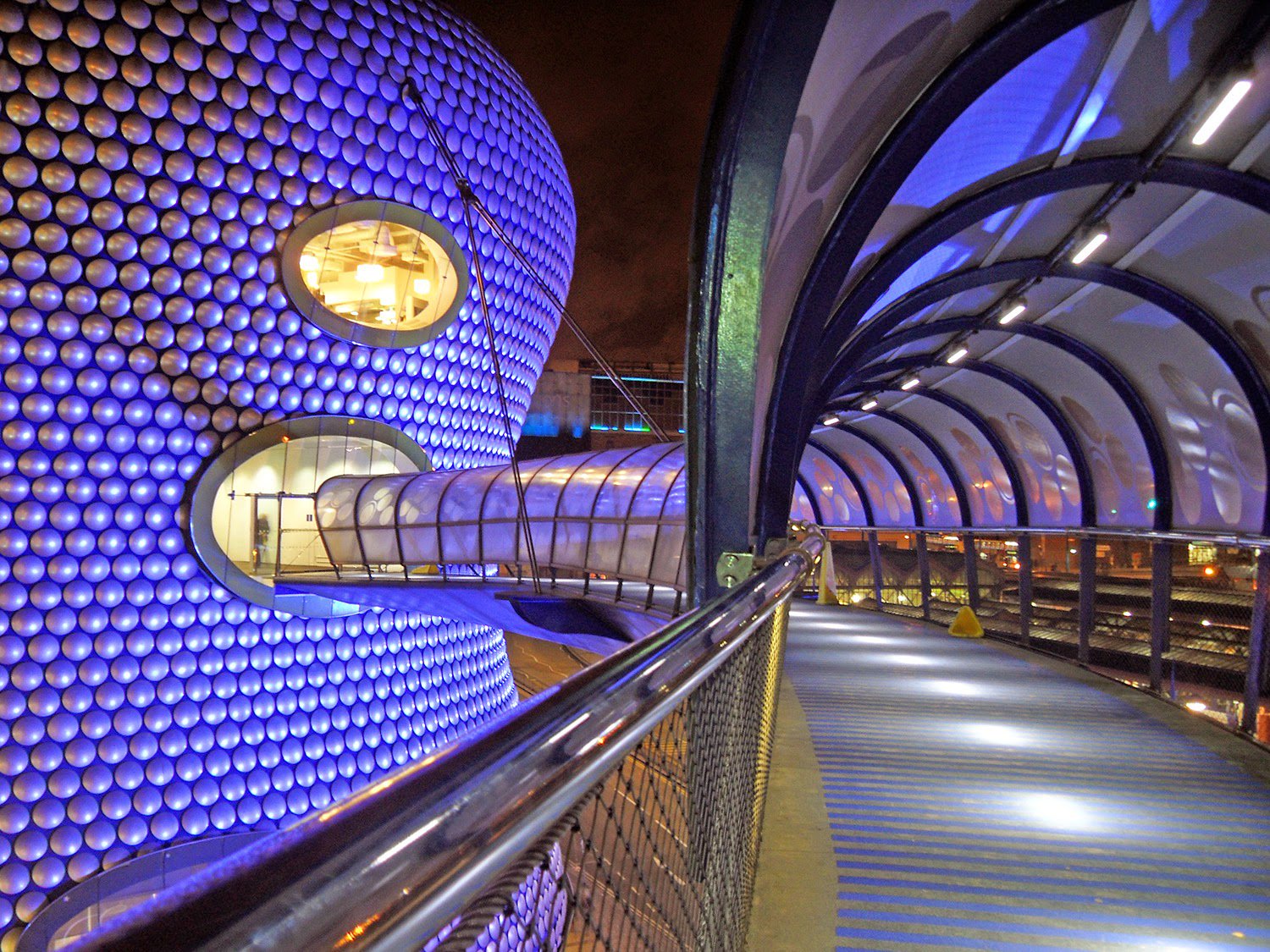 10 coolest retro buildings in the UK

5 Restaurants in Copenhagen you should try

If your idea of UK architecture comes from the silver screen, you could be forgiven for imagining the whole country is filled with chocolate-box thatched cottages, small rows of terraces where young boys who dream of ballet live, and London town houses with wrought iron balconies. But the retro buildings below may change your view of the UK forever!

Manchester’s youngest listed building, listed just 35 years after its construction in 1939, the Express Building is a sleek modernist dream with a streamlined chromed and Vitrolite glass façade. Pre-World-War II, the Daily Express was the most circulated newspaper in the world and its owner, Max Aitken (Lord Beaverbrook) commissioned three new buildings in London, Manchester and Glasgow to accommodate its growth. The Manchester branch is the standout, designed by Owen Williams. When I was researching Sea of Bones, I went looking for old buildings in Manchester that could plausibly be an old publishing building turned night club. The Express Building was one I had my sights on and I was lucky enough to persuade the security guards to let me in for a look around. Inside, the layout of old newspaper offices was still palpable with editors’ offices on mezzanine floors overlooking what must have once been chattering newsrooms.

This conversion of a 1930s garage into unashamedly Post Modern 1980s studios for Britain’s nascent breakfast TV was not everyone’s cup of tea when it first took shape. It smashed together a Japanese temple, a spidery-Pompidou-esque archway, a Mesopotamian ziggurat and 11 giant yellow eggs in stripey blue cups atop the roof. The eggs became so iconic that they usurped TV AM’s original striped sunrise logo. Bold colours, geometric shapes and Memphis-style furniture completed the look. With the blessing of Terry Farrell, the architect who always conceived of the design as non-permanent, the building has now been toned down, but the egg cups remain and are still visible from Camden’s canal.

An other-worldly Brutalist ruin on the north shore of the Firth of Clyde, St Peter’s Seminary was built onto an existing baronial mansion as a residential teaching complex for the Church. The decline in numbers entering the priesthood meant it was never used to capacity and closed after just 14 years in 1980. It became a drug rehabilitation centre before everything — staggered balconies, inter-relating internal spaces with overhanging arches and a ‘ziggurat’ (yes, another one!) — was abandoned to the ravages of nature and graffiti artists.

A Future Reclaimed from NVA on Vimeo.

This former department store in the centre of Belfast looks like it belongs in New York rather than Northern Ireland. The architect, James Scott, had already built one Sinclair’s Department Store in 1926, and in 1935 created this extension. The corner plot allowed him to go big, with three facades and five storeys. Fluted pilasters seem to elongate the building and, combined with the smaller windows on the upmost floor and the stepped trapezoid pediment, trick the eye into seeing a taller structure. Buff faience and decorative panels with a Sinclair shield complete the Art Deco look.

A bridge over the sea inlet Loch a’ Chàirn Bhàin in Scotland’s west Highlands finds a place in this list due to its stunning simplicity. Technically clever, the early 1980s structure is able to withstand high winds thanks to its reduced central span supported at either end by wide V-shaped piers. These huge Vs resemble birds in low flight across the Loch’s surface and the pleasant curve of the bridge and road seems at one with the natural landscape.

A four-bedroomed domestic house designed in the fifties, this place was a wedding gift by architect Peter Womersley for his brother, including a double height living room known as The Dancefloor, with polished wood underfoot and built-in audio systems intended to enhance his brother’s parties and provide a recording space. Materials include campherwood and York stone flags, Formica and floor-to-ceiling glass with breathtaking views over the Pennines. The free flow accommodation and mezzanine add to the sense of optimism and airiness. This place rarely comes on the market, but each time it has I’ve wished I had the money to buy it.

Sussex University nestles in the South Downs near Brighton. Designed by Scottish architect Sir Basil Spence, whose first job was in the office of Edward Lutyens, the 1960s campus is a series of imposing red-brick buildings with inviting interior courtyards and soaring concrete portals. The library is said to resemble an open-book viewed from above, while the ‘Meeting House’, a non-sectarian place of contemplation tucked away among trees, looks like a spaceship. Coloured glass peeps through white concrete blocks in an open ‘stretcher’ latticework that encircles the 24-metre diameter building. From the outside it’s striking but the inside truly showcases how Spence aced his brief: beautiful multi-coloured light fills the space and invites even the most hardened visitor to a calm and uplifting experience.

This streamline moderne gem was conceived as a People’s Palace, a centre for arts and culture, by ‘Buck’, the 9th Earl de la Warr and socialist behind the Festival of Britain and the Arts Council. It opened in 1935, on the promenade of Bexhill-on-Sea, where Buck was the mayor. He’d persuaded the town council, who were desperate to bring new life to the resort, to launch an international competition for a seaside Pavilion to entertain the masses. The winning design, by a refugee from Hitler’s Germany and a Russian who’d already designed the interior for the BBC’s Broadcasting House, was pioneering: concrete, glass and steel, cantilevered balconies and terrazzo staircases and floors. A great white beacon for bombers, it suffered damage in the war, was repaired and so began decades of lobbying for funding and soul-searching for the right cultural offering. It even nearly became a pub but was saved by campaigning and an injection of £6 million from the Arts Council and Heritage Lottery. These days its enviable programming includes exhibitions, gigs, workshops, and live performances. Fans of this style of building will also be interested in the Midland Hotel in Morecombe, Lancashire, and the Villa Marina in Llandudno, Wales.

Head west along the south coast to Hove for a view of a 1970s Brutalist masterpiece. Rising from a leafy suburban street, Hove Town Hall boasts ribbed columns, natural aggregate panels and huge expanses of glass, overhung by concrete canopies. Its clocktower, with fantastically simple faces, baldly declares the presence of a civic building. Architect John Wells-Thorpe was inspired by the ‘democratic’ nature of Dutch and Swedish design. His aim? To avoid any ‘box-like’ characteristics and instead break up the skyline and incorporate as much light as possible while using ‘warm’ materials that would age naturally and need little upkeep.

It’s debatable whether a building dating from 1999 counts as ‘retro’ but the Selfridges building in Birmingham’s Bullring earns a place here because it has something of the iconic Air Max trainer about it (even if it was supposedly inspired by a Paco Rabane dress). An organic form clad in 15,000 aluminium discs and featuring a tongue-like bridge to a car-park, it’s the work of Future Systems, a practice known for ‘blobitecture’. They were commissioned to imagine a destination shopping experience that would reinvigorate Birmingham’s centre and boy, did they deliver: more than a quarter of a million shoppers descended on the new retail centre when it opened in 2003.