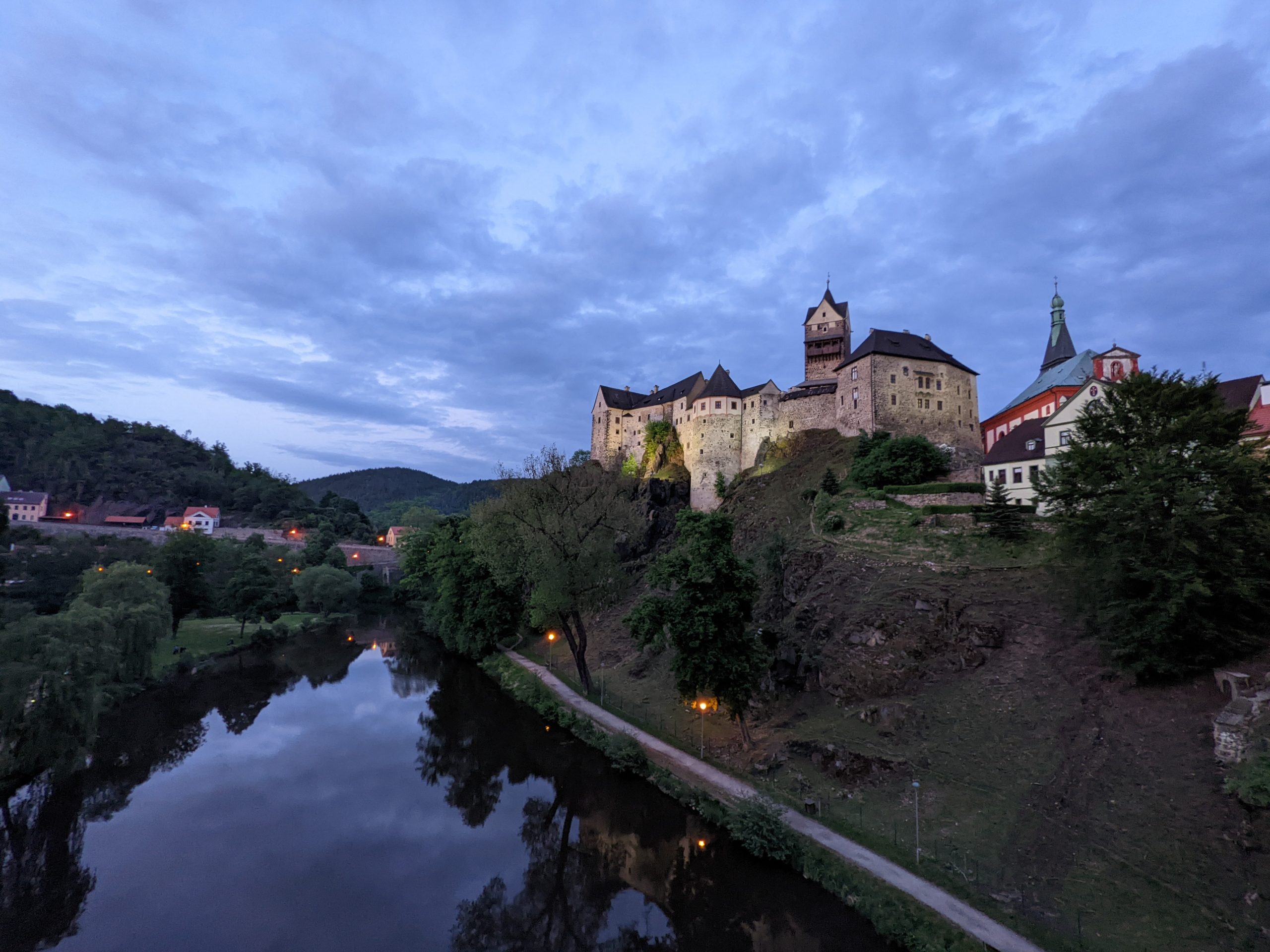 The Middle Ages were the times of kings and queens, balls, knights and muses, chivalries and courtesies. Of course, living in medieval times would be far from ideal, but every now and then one can make abstraction of the less favourable aspects and dream of what it would be like to live on the court of King Arthur.

Luckily, re-enactments are quite common nowadays and, with a little research, you might just find yourself in the right place, at the right time, to experience a medieval evening at a king’s court. One place where you could live an authentic Middle Ages experience is Loket Castle.

The city of Loket stands in the bending of the Ohře River, which also gives it its name, loket meaning elbow in Czech. The city itself already transports you back in time, albeit not as far as the Middle Ages. Nevertheless, its well-preserved look makes it a popular spot not just for tourists, but also for film directors, scenes from the James Bond Casino Royal having been filmed around the central square.

After a short walk around the small city streets and a light climb up some stone stairs, we got to the castle. Dating back to the 12th century, the gothic style castle is one of the oldest and most valuable historical stone castles in the Czech Republic. Being surrounded on 3 sides by the river and having very thick walls gave Loket the name of “The Impregnable Castle of Bohemia”. Today, it still solemnly watches over the city and the river valley from atop the hill.

The castle hosts a few events throughout the year, but during the second weekend of August, life turns back to the Middle Ages, with knightly tournaments on horses, dancers and gothic music, parades of regent and burgrave. We were lucky enough to be offered just a glimpse of such festivities.

Once we reached the courtyard, we were greeted by the king and his attendees. The characters were certainly captivating, but I also could not help but examine the various stands set up around the yard. We had the entire evening ahead of us to explore all the chambers, hallways, nooks and crannies of the castle.

After a short introduction about the castle’s history, the king awaited the more curious of the guests to one of the chambers, where he proceeded to tell the in-depth stories the castle has witnessed over time. I could have stayed there and listened to him for hours, but I was too impatient to discover the rest of the stronghold.

In an adjacent chamber, replicas of the crown’s jewels were displayed. But also royal attire that was once worn by kings and queens.

The next chamber is a proper banquet hall. A long table, from one end of the room to the other, sits on one side, and, on the other side, a shorter one, covered by a white cloth. I imagine only the most important guests were reserved a seat at the decorated table.

I stepped back outside on the small balcony just in time to witness an axe fight. The last words of the losing fellow were “I will return” and indeed, later that evening he took his revenge.

We then decided to explore the tower and the dungeons. The spiral staircase poses a slight challenge, especially after a day of hiking through the Ore Mountains, but the view from the top is worth the effort. On the opposite altitude level, the dungeons preserve the torture chambers from the 19th century, when the castle served as a prison.

Then it was time to discover the games and workshops our hosts had prepared for us. First, a short archery lesson from a handsome Czech Robin Hood. I am proud to say that I at least hit the target, albeit nowhere near the bullseye.

Next to the bows and arrows there was a paper pressing workshop. Thick wet paper is placed into a press fitted with a custom-made stamp. Once the paper dries on hot stone plates, you can use chalk powder, and your fingers, to colour it.

Close by, there was also a coin stamping corner. You have to use a big hammer and hit the top part of the mould after a piece of metal is inserted into it. Hitting something with a hammer as hard as you can is quite satisfactory and you also get a special, hand made souvenir out of it.

Throughout the evening, the court buffoon displayed his joggling skills, with balls, pins and even daggers. There was dancing and we were invited to join in for the easier choreographies. The entire evening was extraordinary and there was not a moment to just sit around. There was just too much to see and do. And, even if for a brief moment, one could truly forget the times we live in. I had to snap myself back to reality to remember to take pictures.