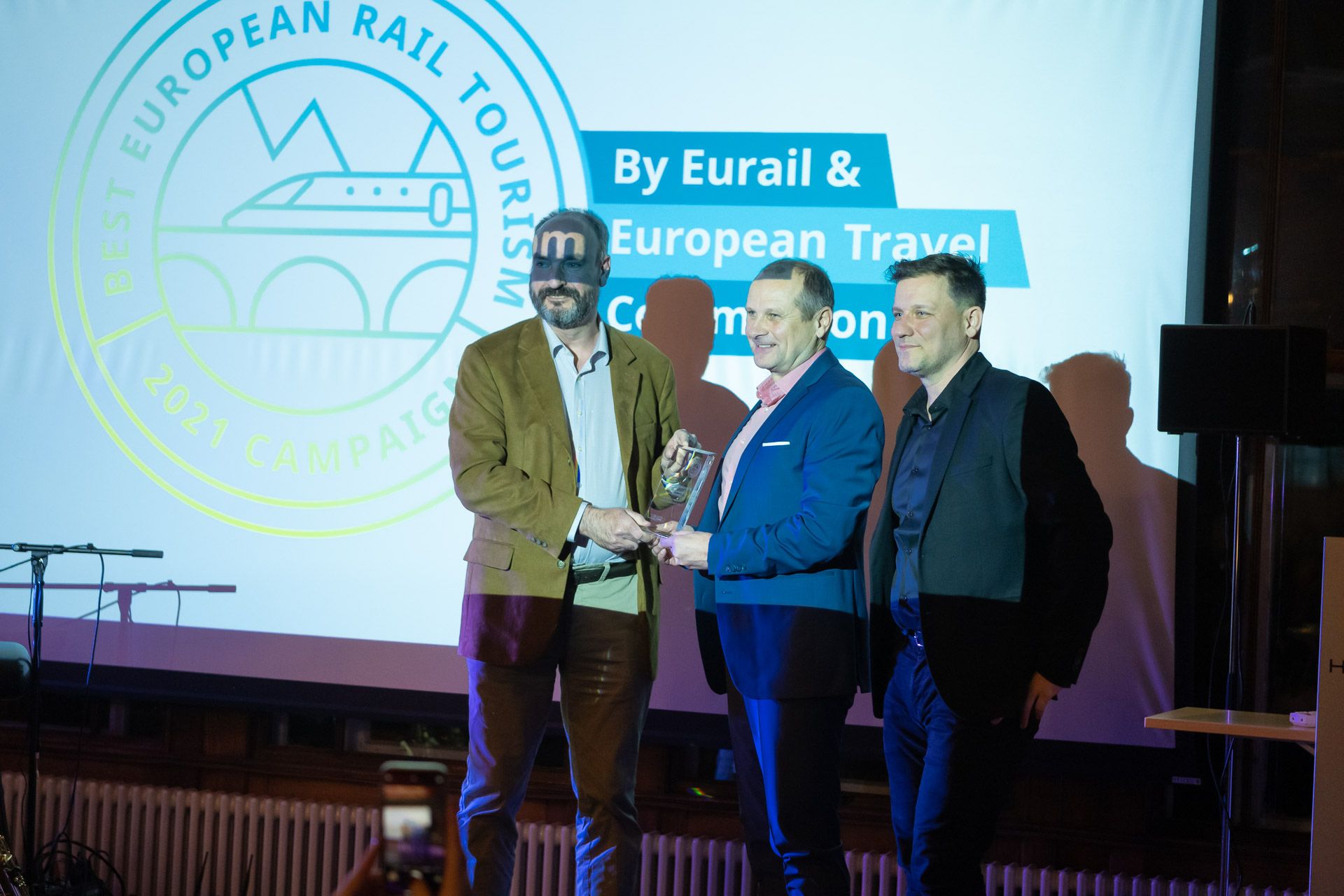 These are the best 2021 European rail tourism campaigns

Braga to revive its Roman past at the end of May

At an award ceremony hosted by Switzerland Tourism on February 2nd, the European Travel Commission (ETC) and Eurail honoured recipients at the first ever Best European Rail Tourism Campaign Awards.

The awards, which were launched in 2021, recognise the marketing campaigns that best promoted rail travel as a sustainable tourism model throughout Europe. This new initiative was designed to put rail firmly in the spotlight throughout the European Year of Rail (EYR) 2021, to encourage the use of rail by citizens, travellers and businesses and to contribute to the EU Green Deal goal of becoming climate-neutral by 2050.

ETC and Eurail received entries from national and local tourism authorities, rail organisations, marketing agencies and other entities with significant operations in the European tourism sector. The winners and runners-up were selected by an expert jury comprised of professionals from the tourism, rail and marketing sectors.

The award winners have done an outstanding job in promoting rail travel as a unique and sustainable travel experience. The creative campaigns will surely inspire travellers from around the world to go one step further and explore Europe by train.

The awards ceremony took place during the ETC’s Annual Meeting in Engelberg, Switzerland. The event brings together the Research and Marketing Directors of national tourism authorities from all over Europe, providing an exceptional platform for the exchange of the latest trends, knowledge and best practices in tourism. This year’s meeting also focused on developing a strategic ETC’s agenda towards 2030, reflecting on how the organisation can contribute to a sustainable transition of tourism in Europe.

As travellers seek more sustainable modes of transport, it is imperative that Europe showcases its rail offers. ETC is proud of the work undertaken by travel and tourism sectors to promote rail tourism as both an environmentally friendly and desirable way to travel.

Ostfriesland Tourismus GmbH and the Provincie of Groningen were awarded the Best New Promotional Initiative EYR 2021 for their WunderlineGO app. The innovative app was designed to raise awareness of the Wunderline, an improved train connection between the Northern Netherlands and Northern Germany.

The WunderlineGO app combines mobility, public transport and sustainability to facilitate travellers exploring and having fun throughout the Netherlands and Germany. In addition to promoting the train as a sustainable means of transport, the app highlights the stops along the route as exciting tourist destinations and invites travellers to explore the region.

The jury was impressed by the app’s ability to promote a local train line while also encouraging people to explore lesser- known destinations in the region.

Railways of the Slovak Republic, Železnicná spolocnost Slovensko a.s. (ZSSK), were awarded Best Completed Rail Tourism Promotion for its campaign entitled We Go by Train (Ideme Vlakom). At the centre of the advertisement campaign was a catchy song that used humour to reflect the benefits and realities of rail travel in Slovakia. The campaign was designed to showcase the rebrand of ZSSK, building awareness of the efforts to improve train travel throughout the country.

Shortly after the campaign launched, the song became the second most popular video played on Slovak YouTube. This viral success caused railway transport to become a topic of discussion throughout the country. Most importantly, the campaign served to convince Slovakians that rail travel can be a relaxing experience full of adventures, good food and quality service. The jury congratulated ZSSK on using the campaign to create a movement that reached the consciousness of the Slovakian public, successfully improving attitudes towards rail travel.

For the Most Promising Campaigns category, the jury was tasked with selecting ongoing campaigns, or campaigns still in the planning phase, that demonstrated great potential. Two entrees, both designed to inspire the youth to embrace rail and cultivate sustainable travel practices in the long term, impressed the juries the most.

KILROY, a Nordic travel agency that specializes in tailor making individual travel experiences for young travellers won the award for its Impact Challenge campaign. The Impact Challenge is a slow travel race for the adventurous, curious, and everyday traveller. The challenge sees 12 teams travel via rail through unexplored Europe while racking up points by participating in pursuit of winning the grand prize at the finish line. The concept was born during the Covid-19 pandemic as a new and alternative way to travel in a new world, while sparking a movement of impactful travellers in the process. The jury was especially impressed by the competitive element of the campaign, as well as its ability to captivate the imaginations of young travellers throughout Europe.

Europe’s Famous Hostels, an association of independent hostels across Europe and Israel, took home the second Most Promising Campaign award for its Eco Wanderer campaign. The innovative campaign to be launched in 2022 promotes a loyalty program and reward system based on a CO2 emissions saving calculator which converts savings from rail users into points redeemable at the association’s hostels across Europe.

The campaign aims to educate, inspire and reward positive behaviours towards sustainability, as well as to give visibility to sustainable businesses. The jury congratulated Europe’s Famous Hostels for developing a campaign that could foster long- term behavioural change and create a generation of sustainable travellers.