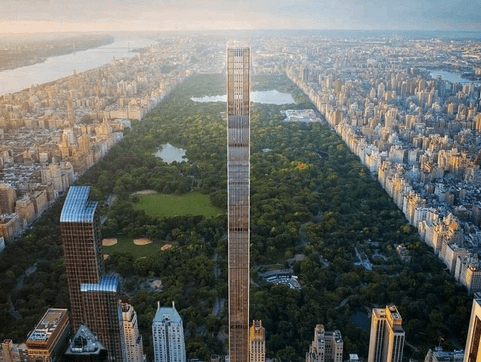 The world’s thinnest skyscraper is welcoming new residents in Manhattan

At 435 meters tall, the Steinway Tower is located in Midtown Manhattan and is also one of the tallest in the Western Hemisphere, trailing only two other New York icons: the One World Trade Center at 541 meters and the Central Park Tower at 472 meters. Located in the heart of Manhattan, at 111 West 57th Street, its construction began in 2013 and required the use of the tallest crane – at 67 meters – in New York’s history.

The story of 111 West 57th Street is a musical piece in two great movements. A project of extraordinary proportions and epic grandeur

The tower includes 60 luxury apartments spanning the 84 floors of the tower and the adjacent building, Steinway Hall. In fact, at the very top of the building is a triplex penthouse overlooking Central Park. This type of super-slim skyscraper, also known as pencil towers, became a common sight on the Hong Kong skyline in the 1970s. Since then, major cities such as New York have followed suit.

Steinway Tower was designed by New York-based SHoP Architects whose main goal was to create a bold new interpretation of the New York skyline while celebrating the site’s historic roots. In fact, the architects said they were inspired by Manhattan’s golden age of skyscrapers and New York’s Art Deco history. The tower was built by JDS Development, Property Markets Group and Spruce Capital Partners, which broke ground in 2013.

In a statement to CNN, Gregg Pasquarelli, principal architect of SHoP Architects, called the building “a project of extraordinary proportions and epic grandeur.” The building is known to be the world’s slimmest building with a base-to-height ratio of 24:1.

And is that the building is built on the base of the Steinway Hall building, built in 1925 by architects Warren & Wetmore and housed the home of piano manufacturer Steinway and Sons and a concert hall. The tower’s facade includes terracotta blocks, a material that appears to change color and texture when viewed in different lights and from different angles.

Steinway Tower has now opened its doors to its new residents, but while its silhouette is slim, the prices are not, with studio apartments costing around €7 million and the penthouse reaching €60 million.