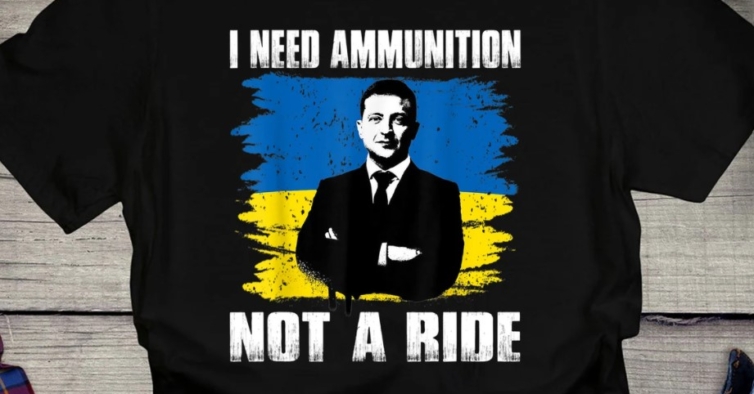 The hype that became fashion: fans can ‘wear’ Zelensky

Jeremy Sampson: “It’s been a difficult time but also one of resilience and increased collaboration”

Three weeks after the Russian military invasion of Ukraine, the Ukrainian President Volodymyr Zelensky, 44, is being hailed as a war hero by the traditional media. The hype around the Ukrainian leader led to the production of t-shirts with his face and iconic sentences being sold online.

The international support shown to Zelensky has been notorious. Since the onset of the conflict, Ukraine’s President has been permanently on the spotlight — on the television, social media feeds and even on clothing.

The supporters of the public figure that went from being a comedian to a leader during a military conflict can now buy various merchandising items — including countless t-shirts — with Zelensky’s iconic sentences incentivising its people.

“I need ammunition, not a ride” is one of the quotes stamped next to Zelensky’s face, an option available on the e-commerce site Etsy, where one can also find some showing only the face of the Ukrainian leader and no text. E-commerce is flourishing with products and clothing promoting Zelensky.

The Whitgo website has launched a set of several models that combine the words and image of the political figure in one piece. In addition to clothing, the website Redbubble is selling a bunch of random items such as mouses for the computer, phone cases and notebooks with the same inspiration.

Despite the hype, Zelensky’s quick ascension to the spotlight has been described as a “PR makeover” by the Canadian-based website Global Research. Among the various incongruences spotted, the research publication found that a photo that went viral on social media shows Zelensky supposedly fighting with the army on the early days of the conflict. In fact, the image is the very same that had been shared in April 2021, when Zelensky was actually visiting the troops.

“The war for Ukraine may be far from decided, but in the public relations battle, Zelensky is clearly winning,” wrote the Los Angeles Times.