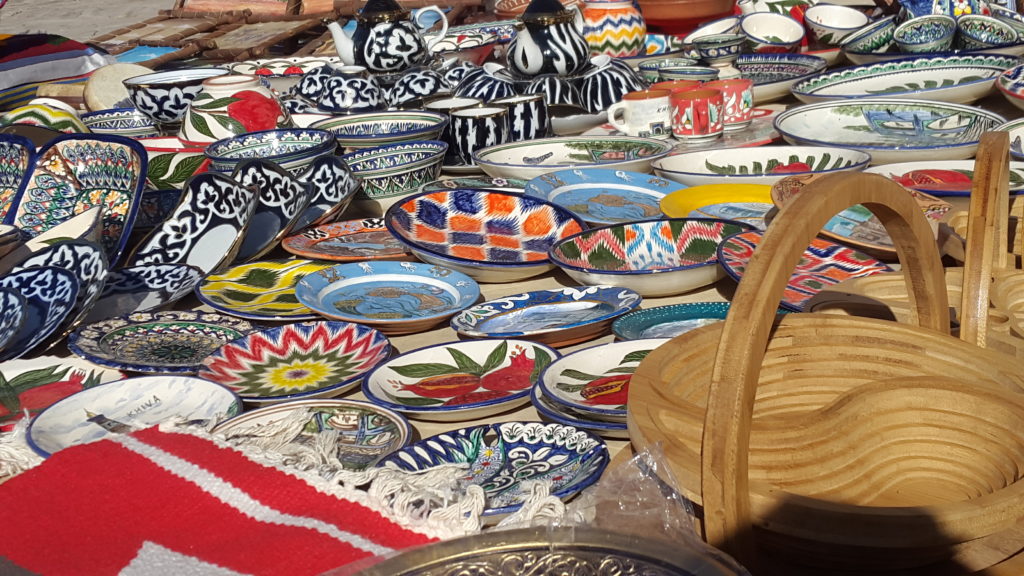 The colors of Uzbekistan:
Exploring the secrets of Khiva

For a period of my life, back when my voice was high-pitched and I cared about nothing except hard-rock music and whether girls were glancing at me, I had to carry a thick book of algebra to school. Twice a week I was instructed to bring it to math class even if the teacher, a pot-bellied man with tiny spectacles pinned to the tip of his nose and who called each student by a number, rarely opened it.

The book was written by Aurelio Baldor, a prominent Cuban mathematician whose work continues to be used in schools in the Spanish-speaking world to this day. On the right hand side of the cover appears the image of a bearded man with large observant eyes and thin feline features, his red and yellow robe matching his neatly tight turban — its fabric seems to have dozens of minuscule folds. Behind him lies a city with buildings the color of sand.

On the left hand side a minaret rises, as well as a dome of what could be a mosque or a madrassah (school). It intrigued me, the image of the studious man overlooking the yellowish city on a clear day, his introspective gaze almost an invitation to ask: What problem are you trying to solve?

His name was visible on the bottom right, inscribed on a twisting parchment: Al-Juarismi. The details of his life remained obscure to me, however, and after finishing middle school I forgot all about the turbaned man, except on those occasions at the end a family get-together, usually on a Sunday, when I’d see my younger cousins dragging their feet to their desks then plump down on a chair to work on their equations.

In August of 2019, I visited Uzbekistan and learned more about Al-Juarismi’s life.

As I enter the Ota-Darvoza Gate (Father’s Gate) of the walled city of Khiva (Ichon-Kala), in the province of Khorezm in Western Uzbekistan, I have to stop. The sky is pristine, the air dry, but even with a baseball hat and sunglasses on, the heat is pounding. The walls of the fortified town run meters and meters, and in the distance a minaret rises to the sky. Behind a large map of the town, I find the statue of man sitting on a bench, leaning to the side over a manuscript, his face deep in thought.

“That’s Al-Khwarizmi,” a young woman with a badge hanging from her neck says to me. “Did you know that the word algorithm is derived from his name?” I assume she’s a tour guide and welcome the information she’s offering. She explains that his name was Muhammad ibn Musa al-Khwarizmi, a scholar born in this region around 780 CE. In one of his treatises, The Compendious Book on Calculation by Completion and Balancing, he postulated a solution of linear and quadratic equations. “He was an astronomer and geographer, a respected man who moved to the court in Baghdad,” she says. “Many believe he’s the founder of algebra.”

After she’s left I stand there for a moment. Under the heat I look at the concentrated look on his face, the folds on his turban sculpted in bronze. Leaning over the manuscript, a hand on his chin, he seems to be wrestling with a long-standing mathematical enemy. For a moment I imagine all the intellectual activity that must have occurred in this town centuries back, the thinkers and philosophers that lived and studied here, their desire to understand the world. Besides Al-Khwarizmi, the great mathematician Al-Biruni and the physician Ibn-Sina (Avicenna) studied in Khorezm at the Mamun Academy, named after the two brothers, Hassan and Abbas, who organized assemblies in the XI century to foster the exchange of ideas.

My stay in Khiva was short but I was able to get a feel for the place. At the start of the 20th century there were 65 madrassahs in Khiva, 54 of them within the Ichon-Kala. The Khanate of Khiva lasted until 1920 when the last Khan, Abdullah Khan, abdicated and the Khorezm People’s Soviet Republic was created. This republic lasted until 1923, when the short-lived Khorezm Socialist Soviet Republic (SSR) came into being on October 20th. Seven days later, part of Khorezm was integrated into the Uzbek SSR, while the rest became part of the Autonomous Karakalpak Region and the Turkmen SSR.

Due to its well preserved monuments and buildings, the Ichon-Kala of Khiva was included in the list of UNESCO World Cultural Heritage in 1990. There are 51 ancient monumental structures and nearly 250 preserved dwellings including the madrasahs of Alla-Kulli-Khan, Muhammad Aminkhon, Muhammad Rakhimkhon, the Mausoleums of Pahlavon Mahmoud, Sayid Allavuddin, Shergozikhon as well as several caravanserays.

I spend the afternoon getting lost in the web of narrow streets and alleyways, speaking with merchants and craftswomen. All over Khiva I see dozens and dozens of Chugirmachiliks, the fur hats typical of the Khorezm region. It is supposed to keep the head cool in hot summer days, and warm in cold days. Dozens of patterned silk scarfs hang in the wind next to embroidered tablecloths and bed covers. Colorful plates and teapots lie in the sun.

Traditional woodcarving has an old and rich history here, and some of the most beautiful examples of it can be seen inside the Juma Mosque (Friday Mosque), perhaps my favorite place in Khiva. The mosque has an inner courtyard with a handful of benches around it. After showing my ticket at the door a feeling of peace washed over me. I stood there for a moment watching a thin veil of light pouring in at an angle and illuminating the floor. Only the murmur of a tour guide speaking to a couple can be heard. Lines and lines of wooden columns — 213 in total — give a feeling of depth and perspective all around. Called karagacha, the elm columns have delicate sinuous patterns carved on them. Only four of the original karagacha remain.

Before sunset I decided to climb the 120 steps to the top of the Islam Khoja Minaret, built in 1910 and nearly 60 meters tall. It is a narrow staircase and the steps seem to have been made for giants — they are very high — but the 360 degree view of the town is well worth the effort.

As for the local food, I tasted the Shivit Oshi or dill-infused noodles. The melons from Khorezm, in all its varieties (Gurvak, Kari Kiz, Bol Kovun) are juicy and fragrant, while the pears, which are as tiny as a hummingbird, seem to flap their sweet wings of flavor in your mouth.

During the trip I had the chance to meet David Hoffmann, an extraordinary food vlogger from Miami, adventurous and full of energy, with whom I shared a plates of rice pilaf, roasted peppers and marinated lamb. Seated at the table, we raised our glasses of vodka and toasted to the scents and flavors of Uzbek hospitality.