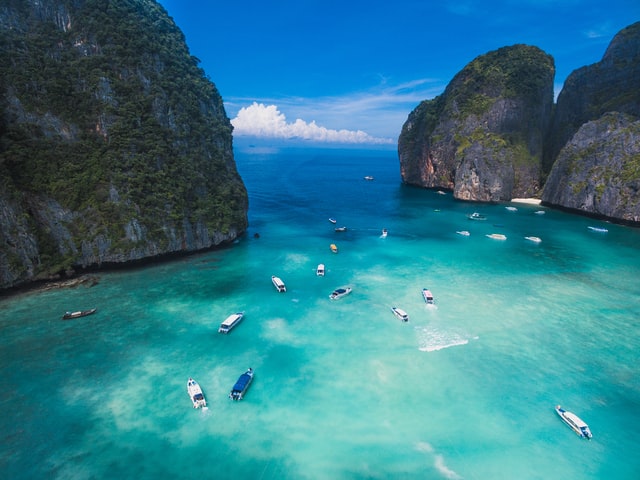 Thailand being widely known for its tourism industry, it shouldn’t come as a surprise that the country is suffering from the consequences of the Covid-19 pandemic. Yet the scope of that impact might not have been clear for everyone until now. Both local and international tourism took a hard hit. Data from Thailand’s Tourism Ministry set the tourism revenue in 2021 at a record breaking low, with an average drop of 69.55% across all 77 provinces. With that, the total tourist receipts account for 241,35 billion baht or 6,5 billion euros.

Bangkok, being the capital of the country, made up a big chunk of that amount. With 62,7 billion baht the city clearly sits at the top of the 77 Thai provinces when it comes to tourism revenue. Chiang Mai comes in second with 23,3 billion baht followed closely by Phuket at 21,3 billion baht. The province Nong Bua Lam Phu on the other hand generated the lowest amount of tourism income at only 58.24 million baht.

Three-quarters of hotels were uneasy about the Omicron threat as 42% of them were deeply concerned about the situation and 44% were moderately worried about the latest outbreak, particularly hotels in the North which recorded a high number of cases.

Thailand already suffered a drop of 55,4% in tourist revenue in 2020 when it generated 482 billion baht. The losses from the two past years combined clearly make the actors of the tourism industry in Thailand quite apprehensive about the future. The hotel business operator sentiment index conducted by the Thai Hotels Association (THA) and the Bank of Thailand asked 200 operators within the country about their occupancy rates, expectations and much more.

“Three-quarters of hotels were uneasy about the Omicron threat as 42% of them were deeply concerned about the situation and 44% were moderately worried about the latest outbreak, particularly hotels in the North which recorded a high number of cases,” Marisa Sukosol Nunbhakdi, president of THA, explained to the Bangkok Post. “As the Test & Go program has resumed from this month, average occupancy in February is expected to match December’s level. However, with higher operating costs amid sluggish income, hotel operators would like the government to extend the land tax reduction of 90% for at least two years,” she concluded.

The index also revealed a few more objective facts. First of all, about half (49%) of those who were interrogated said to be earning less than 30% of their income from before the Covid-19 outbreak. Furthermore, the negative income trend still continues. The occupancy rate of the hotels and other accommodations dropped to 32% in January 2022 compared to 37% due to a temporary stop of the Test & Go program.  All of this means that 53% of the interrogated haven’t got enough cash flow to sustain themselves for more than 3 months. Even though the future of the Thai tourism industry isn’t certain, 73% of the actors have now resumed their activities as the Test & Go program has been reinstated.