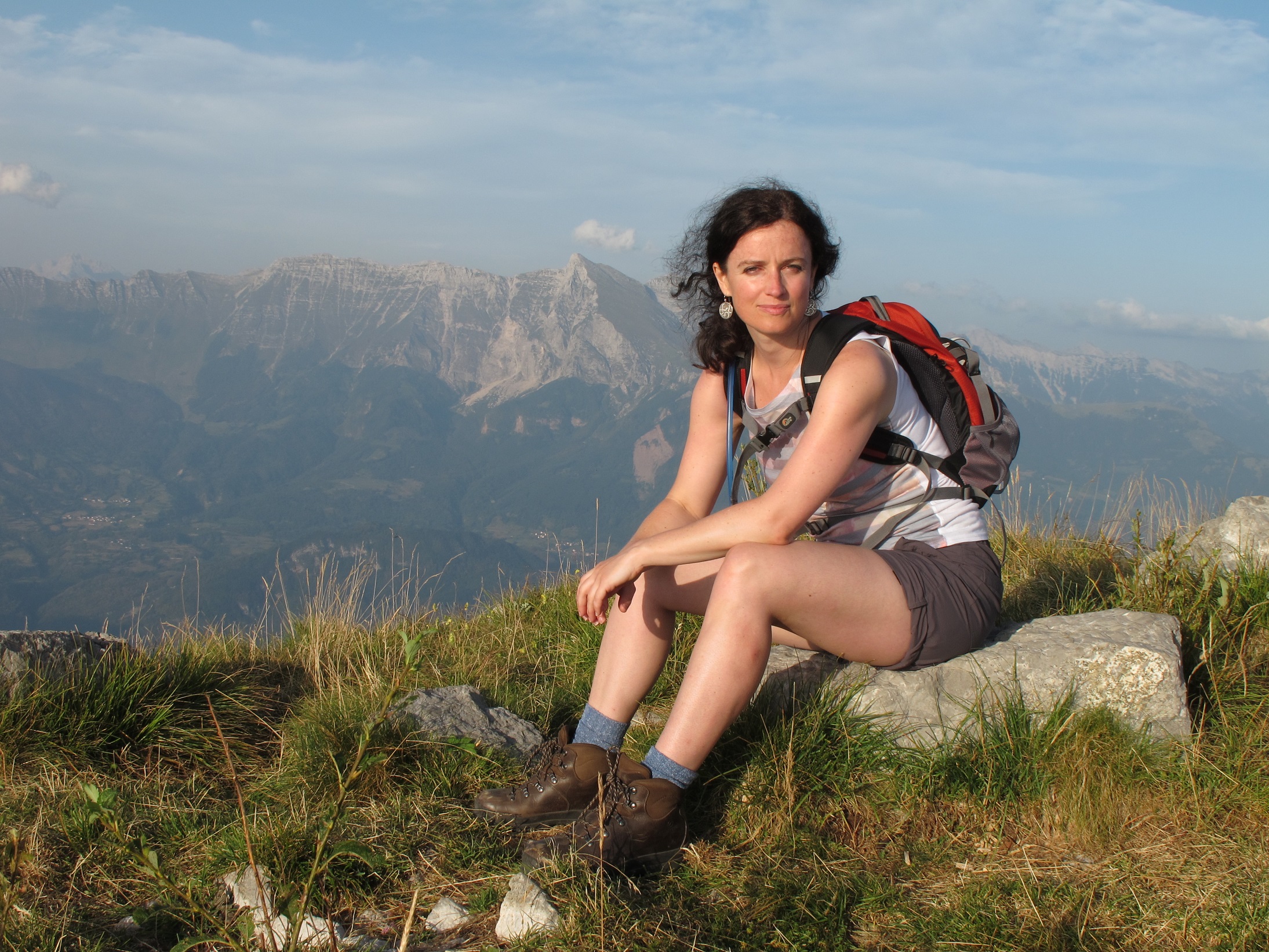 Secrets of the Soča Valley

Midway through life’s journey here, I found myself in a dark wood, where the way ahead was no longer clear . . .

The River Soča, named for its swift-rushing water, flows bright emerald green for the whole of its length, from its source in Slovenia’s north-western Julian Alps, to its mouth on Italy’s northern Adriatic coast. In some ways a division between Europe and the Balkans, this part of the world has inspired writers from Dante to Hemingway, but it has also witnessed horrors. During the First World War it ran parallel to Italy’s border with the Austro-Hungarian Empire and became a 600km-long fighting front. Today, the valley is a paradise for hikers, climbers, wild swimmers, rafters and canoeists – and home to a unique and endangered species of marble trout.

I was based in the Slovenian town of Kobarid to explore the region. With a bridge over which Napoleon’s soldiers once marched, Kobarid (Caporetto in Italian) has had its fair share of action. It was the site of such a thrashing of the Italians during the First World War that the phrase ‘Caporetto’ has become synonymous with total defeat. Hemingway describes the town in ‘A Farewell to Arms’: ‘a campanile in a valley . . . a clean little town . . . a fine fountain in the square.’

Hemingway neglects to mention Kobarid’s patchwork of red-tiled roofs, the wooden balconies filled with red flowers lining the streets. Supposedly he never even set foot there. Still, the town’s accolade-winning war museum has adopted the American as one of its heroes, rather than local 19th century poet Simon Gregorčič, whose poem ‘To the River Soča’ eerily foresees the bloodshed to come but also urges a kind of nationalism. It’s easy to understand why, in a battle-weary town, someone like Hemingway, capable of spreading an unromantic anti-war message, might be preferable. If you need further convincing, just follow a nearby walking trail to arrive at a solemn ossuary, housing the remains of over 7000 Italians. Despite being inaugurated by Mussolini himself, the octagonal grey stone monument and little white chapel overlook quiet hillsides. It’s a place to contemplate Kobarid’s fate – controlled variously by Austro-Hungarians, Italians, Nazi Germans and Yugoslavia, until Slovenia broke away to become independent.

Tracing war’s shadow, I visited mountain dug-outs, some with still-visible trenches and sentry-posts. First World War soldiers lived and fought here, and it’s estimated that well over a million of them died, many freezing or plummeting to their deaths in white-out conditions while attempting – unbelievably – to haul canons up precipitous slopes.

Sometimes such brutal conditions are hard to imagine. I swished through alpine pastures filled with swaying wildflowers and edged by colourfully-painted bee boxes, otherwise known as ‘AZ hives’ (a bespoke and historic Slovenian form of apiary for the protected Carniolan honey-bee). I climbed forested hillsides to emerge on deserted and crumbling passes, where the way forward seemed to have disappeared. A couple of times, I was forced to turn back, disappointed. Some Slovenian walking trails use Italian grades, meaning that a route for ‘skilled hikers’ (not climbers, mind you) can nonetheless involve sections of scree and scrambling at altitude that are too much for me. I was unable to reach the famous ‘natural window’ in Mount Kanin for example, despite its ‘easy’ rating. Working on my fear of heights is a lifelong project.

After that failure, I took a couple of days off from the mountains to regroup. I visited the valley’s depths instead: the Tolmin Gorge is the lowest entry point to the Triglav National Park. A 2km easy circular path has been carved from the rockface, lush with ferns and moss above the clear turquoise waters and white pebble bed of the Soča. You will cross the 60m high Devil’s Bridge, pass thermal springs and reach Bear’s Head – a rock wedged high between the canyon walls.

For me, the most exciting moment in the gorge was stepping inside the entry point to Dante’s Cave, so-called because early in the 14th century, the patriarch Pagano della Torre welcomed poet Dante Alighieri to Tolmin. Dante is said to have visited the 41-metre-deep, kilometre-long cave complex whose three underground ‘halls’ inspired the Hell of the ‘Divine Comedy’. The cave was later named after the poet. I nodded to myself, remembering Dante’s opening lines: ‘Midway through life’s journey here, I found myself in a dark wood, where the way ahead was no longer clear . . .’  They seemed to describe not only some of the walks I’d taken, but Slovenia’s troubled journey as a country too.

These days, the relationship with neighbouring countries like Italy is kinder: back in Kobarid, there was a wood-fired pizzeria called ‘Fedrig’ where I went three times to scoff my new favourite: a thin-based ‘deer sausage’ pizza. But the real culinary highlight of the trip was a blowout tasting menu at ‘Hiša Franko’, a former coaching inn which just this year earned two Michelin stars for its approach to local ingredients and fine dining.

Suitably reinvigorated, I decided to tackle a final walk before I left: one that had been staring me in the face my whole stay. Mount Krn. The highest in its group, Krn’s distinctive peak is spottable from many places in the Julian Alps. Krn means ‘stump’ or ‘what is left’ in Slovenian. Why? Because the northwest face is sheer, steeply cut, a bit like Yosemite’s Half Dome, while the other side slopes ‘more gently’ away. During the Italian era when everything was being renamed, ‘Krn’ was mistaken for the word ‘crn’ (black), so it is also known, forbiddingly, as Mount Nero, or the Black Mountain.

The Black Mountain, all 2244m of it, looms over the town of Kobarid. I checked and checked again at the local information office. Krn is marked as an ‘easy’ trail in some guides. Would it be suitable for someone with vertigo? The assistant at first looked bemused, as if the idea that anyone could find Krn daunting was absurd. When I insisted, she hummed and hahhed. ‘There is a section with a turn’ – she said – ‘at 1700m or so. You have to skirt round a kind of steep drop. If you can manage that, you’ll be fine.’ Would this be another Dante-esque path that would become hellishly difficult part way?

I set off from a car park at 1000m. The first third of the hike traversed more idyllic pastures dotted with dwarf carline thistles, shockingly metallic in the sunshine. What people who don’t mind heights may not realise is: the fear is not logical. As the villages below shrank to miniature toys, and Krn (and I) rose above the surrounding terrain, the feeling of emptiness around me began to hollow out my back even though my feet were firmly in a summer meadow.

‘Come on,’ I thought. ‘Fight it.’ I remembered those soldiers, dragging heavy military equipment up such ascents, many of them never to come down alive again. I gave myself a stern talking to. The climb continued, gentle-ish at this point, but unrelenting. My thighs were complaining even before I reached the section I’d been warned about. The words ‘steep drop’ were ringing in my ears.

Finally, I was upon it. Eyes glued to the inside edge of the narrow path, I just kept putting one boot in front of the other. I was hot – the whole hike is on southern slopes and so in summer you are under the sun’s glare – yet I was sweating not with heat or effort, but fear. I completed the ‘difficult section’ only to be faced with the climb to the summit, a path zigzagging up an incline so steep it felt like I was about to fall backwards into nothingness. There’s a photo of me sitting by the 2000m marker. It’s quite funny really. I’m smiling, nearly at the peak, but you can see my knuckles are white, gripping the grass for dear life.

The panoramic view from the top was epic: the Adriatic shone in the distance; Slovenia’s now peaceful green hills and summits bounded away as far as the eye could see, the aquamarine Soča River threaded through it all. Even while pulling on a jacket due to the temperature change, I swelled with wonder and achievement. Then, with Krn’s ‘stump’ under my belt, I fair skipped back down those narrow paths, the shadow of fear not quite forgotten, but the way ahead clear.