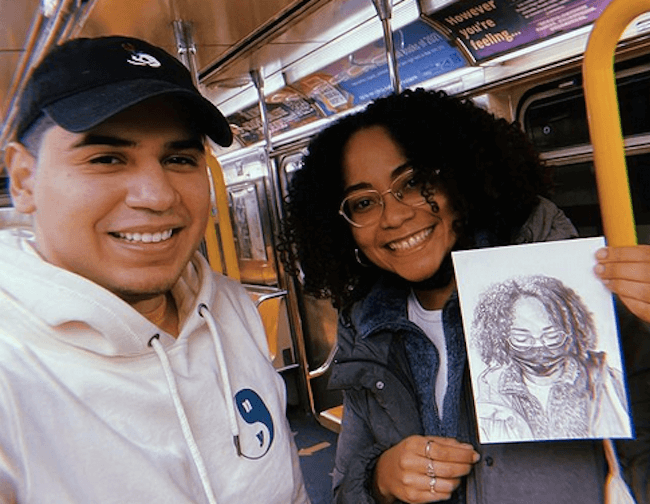 These are the 50 best bars in the world

Devon Rodriguez is a 25-year-old young man who never ceases to surprise New York subway users by making hyper-realistic portraits that he then gives them as gifts. In just a few minutes Devon is able to make a portrait that almost looks like a photograph and that leaves his occasional models speechless, who do not know anything until the artist approaches them to give them the drawing.

Rodriguez shares his work on social networks with great success, as he accumulates nearly two million followers on Instagram, almost 15 million on TikTok and 700,000 on his YouTube channel.

I try to choose any variety of people, any race, any age, it’s a random thing.

For Rodriguez art has always been part of his life. Since he was 4 years old he began to draw, in adolescence graffiti became his hobby. At the age of 13 he was arrested and gave up street art to focus on portraits. Little by little he matured his style until he started making portraits of people in the streets, that’s how he discovered his true passion: making hyperrealistic portraits. He was born in 1996 in the South Bronx borough of New York.

In 2012 he entered the Institute of Art and Design in Manhattan to later attend the Fashion of Technology also in New York, a university specializing in art, design, communication and business.

In an interview with Savannah Sellers of the TODAY Show, the young man from the Bronx, New York, shared how he manages to create these intimate pieces of art while traveling in the city’s subway, or walking the streets of ‘The Big Apple’, inspired by the everyday aspects of everyday life.

It was during the pandemic when Devon decided to take to social media with his drawings, without much expectation, and the response from users surprised him.

“In the quarantine we were all cooped up at home and bored. I saw on Instagram these guys going viral and living the high life, so I thought of TikTok and said ‘can it be this way.’ I went back to the subway, drew people using their mouth covers and said ‘let’s see how this goes,'” Devon explained.

His first video was a success, in a few hours it surpassed one million views and in a few days it already had five million, which for the 25-year-old artist was “crazy”.

In June 2020, Devon had only 35 followers on TikTok, but since he started posting the subway videos his popularity has skyrocketed. He currently has more than 19 million followers, making him the most popular artist on this social network.

As shown in his popular videos, his models are shocked when they discover themselves portrayed on a piece of paper, something that is inevitable when observing the detail and beauty of Rodriguez’s work.

My grandmother saved me from a terrible situation. She came here from Honduras 30 years ago and was always in poverty in the Bronx, so now I can help her financially.

Now that he has achieved fame, Devon keeps his “feet on the ground” thanks to the most important person in his life, his number one fan, his grandmother, who doesn’t quite understand the reach her grandson’s art has thanks to social media.

His work has been published in prestigious media in the United States such as the cultural magazine The New Yorker or in the style magazine of The New York Times. In addition to these recognitions, in 2019 he was a finalist in the Outwin Boochever Portrait Competition for his portrait of the sculptor, John Ahearn.