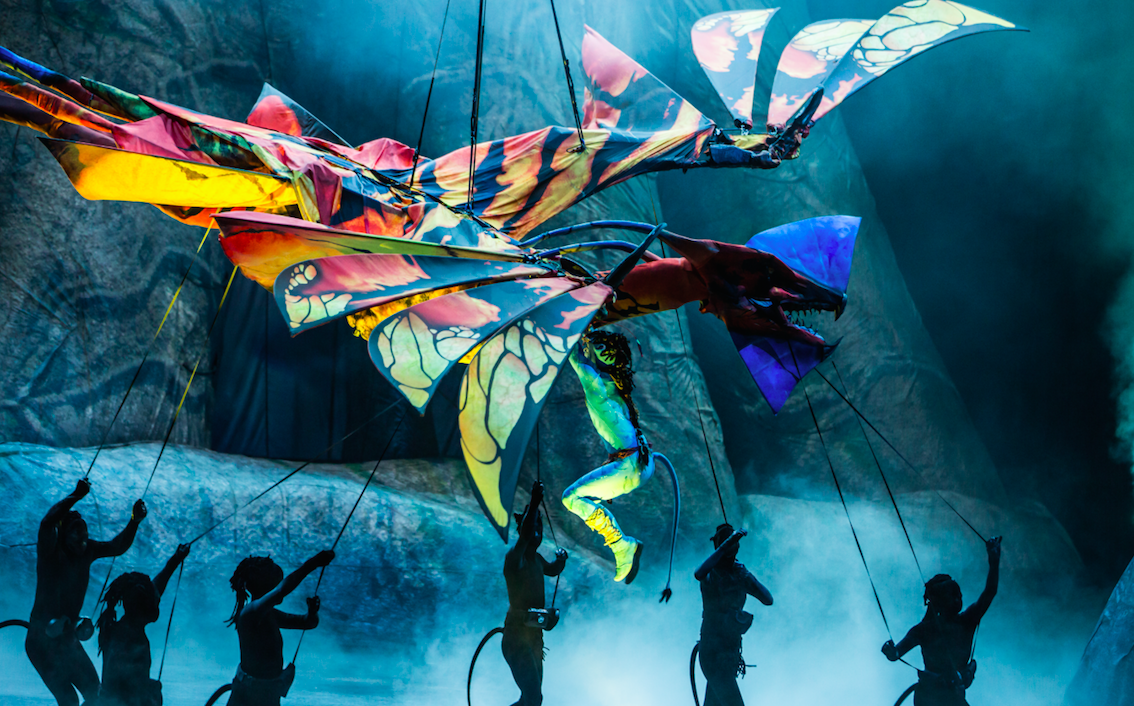 What lies ahead for Cirque du Soleil and companies affected by Covid-19?

A day trip to Turin

Cirque du Soleil Entertainment Group, one of the most recognisable brands in live performance, filed for protection last month after the coronavirus pandemic forced closure of its shows around the globe. As of March 31, the Montreal-based company owed creditors over a billion dollars. Delighting audiences since 1984, with its character-driven approach to physical theatre and circus arts, the Group is now undergoing financial restructuring to enable it to survive and continue its mission.

We interviewed actress, aerial circus artist and puppeteer Helen Day, about her experiences travelling the world with the Cirque du Soleil Avatar-inspired show, Toruk, and about what might lie ahead for artists and companies affected by the pandemic.

Helen, how did you start working with Cirque du Soleil, and when? How long were you touring with them?

Back at the end of 2014, I saw a post in a Facebook group where Cirque du Soleil were looking for puppeteers. I had been a professional puppeteer and physical theatre performer for ten years, so I thought this was something I really should take a closer look at. I found that the brief really was Me. I put together an audition tape and after that was invited to a live audition in London. A Cirque du Soleil audition is really unlike others, because you’re not trying out for a specific role but more to be on the company database. I was lucky enough that a few weeks later they offered me a job as a puppeteer and acrobat generalist on Toruk.

I toured with them for almost exactly four years. We started rehearsals on 20 July 2015 and my final show was 30 June 2019

What was your favourite part of the show?

I had two favourite parts of the show really. There were six of us puppeteers working with various scale puppets, some of which needed to be operated by one person, some by more performers. Toruk, the show’s namesake, is a giant flying bird-dragon that anyone who has seen the film Avatar would recognise. He appears at the end of the show and all six of us would come together to bring that beast to life, so I truly loved that feeling of collaboration. It was a great way to end the piece every night.

I also got to do rope work and harness work and, as an aerial performer, I love being in the air. So, flying the Toruk and flying myself were my favourite parts of the show.

Can you describe the most unusual or memorable places you travelled to/performed in and why?

We visited 103 different cities and performed to over 3 million audience members, so it’s difficult to pick out individual locations because there are so many places that astonished me. But perhaps the ones I really loved were those I wouldn’t have discovered by myself in quite the same way as I did through the show. Moscow is good example. Walking its streets, it just felt so grand and ‘Absolutely Moscow’ and powerful.

In terms of performances, one of the most memorable was Mexico City (Palacio de los Deportes) because we had around 12,000 audience members in that arena! I’m pretty sure they packed people into seats where there shouldn’t have been seats. Having that number of people in the space gives shows an amazing energy.

Another impressive venue was when we were in China for three months, and in Sanya there was not a suitable space, so Cirque was able to develop and construct a pop-up arena, a massive tented space, in a really short period of time. We then also took that space to Saudi Arabia.

Saudi Arabia was perhaps the most interesting experience. On a personal level, I confess I didn’t really want to go at first, because obviously it’s a country with lots of laws and rules that are quite contrary to what I’ve grown with – especially as a woman. But the way the show was received was incredible. We had a mix of genders on stage together, which was unusual in that context. I was injured for part of that time and so I had the opportunity to sit among the audience. Mothers with children turned to me and said, ‘Our children have never seen anything like this,’ and that felt like we were part of something very special and powerful.

There was a sense for me as a traveller there that I was seeing a country just as it was starting to open up to the rest of the world. I realise that a certain class of visitor, perhaps businesspeople, have been going there for some time. But as a woman, a worker, to have some independence, it was quite remarkable. The people were so warm and receptive, both to us as guests in their country and to the show. A group of us did a little trip to the desert, to a place called The Edge of the World, Riyadh. It’s an epic piece of desert landscape with immense cliffs that appear to fall away as far as the eye can see. There I was, a year and a half ago at Christmas, standing on the edge of the world, and I felt really privileged to able to see it.

Why is it important for shows like this to reach audiences in far-flung places?

There are so many reasons why it can be important. Symptomizing social change. Making the world a smaller place in terms of how we understand each other and appreciate each other’s art forms and traditions. I know we will talk about carbon footprints in a moment, and that should not be dismissed, but our show at its core was about understanding connection and the human connection to the Earth and those issues need to be told in a way that connects people across the globe.

How many people will have been affected by Cirque du Soleil ceasing touring?

I believe the number of people unemployed as a result of the current situation is around 3,500. There are also many associated contractors involved when a show of that size comes to town, such as caterers or site ushers. So there will be a huge knock-on effect. It’s an immense sadness for the circus world, because that community isn’t huge, and for that proportion of people to be affected – it’s a lot for the industry.

Cirque du Soleil has always been ahead of public opinion, for example, with its absence of performing animals. In your view, what will Cirque du Soleil (and large-scale touring shows of the kind) need to do from now on to redefine themselves faced with the twin challenges of pandemic and growing awareness of carbon footprints?

I think what COVID-19 and the confinement has highlighted is that there is a hunger for the Arts and for connection and collective experiences. I hope the pandemic is something we will learn from in terms of keeping people safe, but I also hope that it’s a thing for ‘now’, that we will be able to learn and recover from. Going forward, shows like this are going to have to get inventive and really start thinking about how they can move around the world gently and softly.

In recent years there have been about 20 shows in repertoire at any one time, including static ones in Vegas, so multiple locations are being used at any given time. To avoid lots of travel, you could look at increasing the number of static shows, but the problem with static shows is sustaining an audience. Las Vegas has a tourist industry with a constant influx of visitors, but in other cities, even big ones, you eventually exhaust your audience. To mount the type of shows Cirque du Soleil puts on, you need big audience numbers to sustain the activity.

I grew up in a small Lincolnshire town in the UK, and we were quite isolated and never got to see the big shows and I feel for people in places like that. Ceasing touring performances would compound that access problem – how would you reach out to that mum who spoke to me in Riyadh? But the people behind Cirque du Soleil are creative brains so I’m sure solutions will be found to enable them to continue to tour great work to great places.

As a performer who used to travel a lot how have you redefined your way of living, and do you have any comments on sustainability of touring shows?

I’ve been based in Los Angeles nearly a year now, and I love it. It’s been very different in lockdown, but I love the energy of the place and it’s full of fascinating people. I had been here previously, twice with the show, and a couple of times by myself, and I was able to make a few contacts. I had an inkling I’d like to pursue life and work here. It’s really surprisingly beautiful, some of it is gritty of course, but it’s also green and the weather helps!

Coming here to be a screen actor after being in massive scale physical theatre is a great challenge and I love soaking up new knowledge. As well as studying, I also teach circus arts.

Before the pandemic I was working on a video game and getting into performance capture. I hadn’t really considered performance capture before coming here to LA, but I have to say, I’m good at it. It’s an interesting blend of the type of subtle nuances and gesture you employ for screen acting but with a bigger and perhaps freer performance style, that draws on my physical skills, so I really want to pick that up again when it’s safe to do so.

With the technology involved in performance capture, we have the potential to reshape aspects of the industry. We could film every performer on their own and then put them together to create a show. It’s also interesting to note that there’s a natural space between actors with performance capture because you’re wearing a camera, so there’s the potential for that to evolve and create opportunities to continue to tell stories in different ways as we emerge into a post-COVID world.