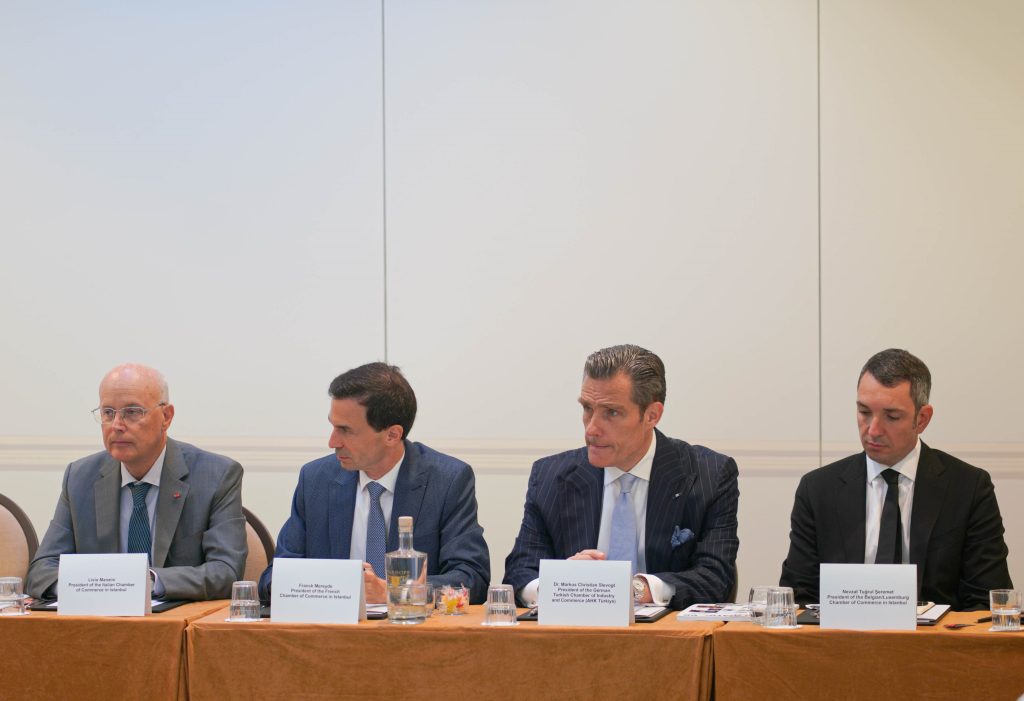 On 6 September, the presidents of the bilateral chambers of commerce of EU countries to Türkiye came to Brussels to show why the 25-year-old customs union between the two blocs needs to be modernized.

After the presentation and initial discussion, we sat down with them at the premises of the European Parliament.

You mentioned in your presentation that talks to modernize the Customs Union started in 2014, but no progress has actually been made. What are the challenges that have impeded this process?

Dr Markus Christian Slevogt, President of the German-Turkish Chamber of Industry and Commerce: The challenges are primarily related to political agendas. The pure economic topic of the customs union has been used in the political discussion, therefore, despite different attempts that have happened over the course of the last couple of years, since 2014, they were always somewhat pushed back in the context of the political perception of Türkiye. The understanding of the customs union is driven more by the respective countries’ political agendas rather than the economic needs that we, as business representatives, are seeing.

One of the first things you mentioned today was the fact that the Italian chamber of commerce in Türkiye was founded over 137 years ago and has survived through many challenges. How has the Customs Union benefitted Italy over the years?

Livio Manzini, President of the Italian Chamber of Commerce in Istanbul: This is a good question because the trend in bilateral trade and investment has been positive basically since the foundation. Italy is now the second largest EU trading partner of Türkiye and the fifth largest overall. Clearly the customs union has had a role in reaching that level.

The good thing about the Turkish economy is that it is a diversified economy. Sometimes I’m being asked, ok, but which sector are they investing in and it’s difficult to answer because you have automotive, you have machines, you have quite a lot of sectors and I think the customs union has allowed this multi sectoral development to occur.

How do you think the modernization of the customs union will further enhance the already strong relations between the two countries?

Livio Manzini: The study that we commissioned from all the bilateral chambers of commerce has clearly shown that this modernization is a win-win situation. It will create lots of jobs and have an impact on the GDP of both countries.

As far as the specific bilateral trade of Italy and Türkiye is concerned, last year, post-covid, we were at a record high of 23 billion USD. Our calculations are that we can reach 30 billion USD within 5 years. And these calculations were before we reached the 23 billion, so we think we will reach a 50% increase. You can imagine what that means in terms of additional GDP points, additional job creations. I think these calculations are even on the conservative side.

Earlier you used the metaphor of Türkiye being a train that the EU could be missing, the US and UK having already got onboard. And Dr Slevogt said that Türkiye is an undervalued asset and to take advantage of an undervalued asset you need to be early and ant cyclical. So my question is, what repercussions could the EU face if it does not get on this train in time?

Dr Markus Christian Slevogt: If you are referring to what I said in our previous meeting, there’s always a specific timing for being invested and getting invested and in this particular case we need to start the negotiations and discussions about the customs union now. Because this is the catalyst and the communications channel for the European Union vis-à-vis Türkiye which will lead to a spill-over effect in terms of technology and so many other areas that will help enhance the economic relationship and to make sure that the asset that is still undervalued will be then harvested as an investment opportunity.

When looking at the bigger picture, you have two giants, on one side, the United States, on the other side, China, and they are not necessarily the biggest fans of the European Union. They are always pretending to be the biggest fans, they are taking advantage where they can, but, in the end, we have to get our act together to ensure that, on a strategic level, we are able to resist the pressure that will further come from both sides. One major important corner stone that will help us mount this challenge is to bring Türkiye closer to the European Union.

Livio Manzini: I think the EU is late. We talk about timing, is it the right time? It’s past the right time. We should have already started. Why is it past the right time? Because other players, as Markus said, the US in particular, which defends its own interest, has already spotted the potential in Türkiye and is actively trying to develop it. The UK, right after Brexit, has signed a comprehensive trade agreement, the first trade agreement they were signing after Brexit, and from many points of view it is a more comprehensive one than the one the EU has.

So yes, the train is leaving and it is a fallacy to think that you can join it at any time. Because the infrastructure, the volumes, the production capacities are not infinite. They need time to be built and therefore if you think you can re-join at any time at no cost is also a fallacy. Some capacities are being blocked for other players and therefore I would say the EU is already late and it should really get its act together very soon. It will be a lot more expensive and more timely to get on the train late.

Dr Markus Christian Slevogt: And then the asset has already appreciated and is not an investment opportunity anymore. Timing is key.

What do you think the most pressing aspects of the customs union that need to be modernized are?

Nevzat Tuğrul Şeremet, President of the Belgian/Luxembourg Chamber of Commerce in Türkiye: The modernization of the customs union is a process, it is not something that can be done from day to day, it would take at least 3 years to finalize. We’ve had a lot of time wasting, for example, in agriculture, the services sector, so these topics should be added to the new updated version. On the other hand, we really see that the benefit of Türkiye as an EU trade partner has grown thanks to that agreement and we see no reason behind not starting the talks for a new version. It’s all straightforward.

Franck Mereyde, President of the French Chamber of Commerce in Istanbul:  I think this agreement was not updated for the last 25 years exactly because of this. We must keep the issues separate. The EU has many customs agreements with countries around the world not linked to EU integration.

A customs union is something else which is moving fast, at the speed of the needs of the people, businesses and services. All the companies have updated their strategies to include more services, more digitalisation, more sustainability and environmental concerns. This customs union agreement should include this and move at the same speed, like how EU with third parties or Türkiye with third parties have updated their agreements. That’s why we need this improvement as soon as possible and not to be linked with EU adhesion.

Lastly, what effect do you think this event here in Brussels will have on the process of modernizing the customs union?

Nevzat Tuğrul Şeremet: I think it will be a heads up. As the presidents of the bilateral chambers of commerce we are always in business and I think our presence here today has drawn enough attention about this topic other than the usual discussion about politics.

Franck Mereyde: Through this initiative we want to show that it is not only the view of Türkiye, but the view of all the EU countries doing business with Türkiye. Both sides need this improvement.

If I talk just about French companies, we have more than 130,000 people in Türkiye working for French and French-Turkish companies. If we extend to all the EU consortium working with Türkiye, we are talking about hundreds of thousands of people.

This also creates more connectivity, a more common mindset, a more joint cultural approach to work together on innovation, carbon impact, digitalisation, women’s rights and so on. All these parts of the customs union agreement are a way to bring people closer. We set a great ecosystem which makes us more competitive. By us I mean the EU, including Türkiye, against big competitors like China and the US.