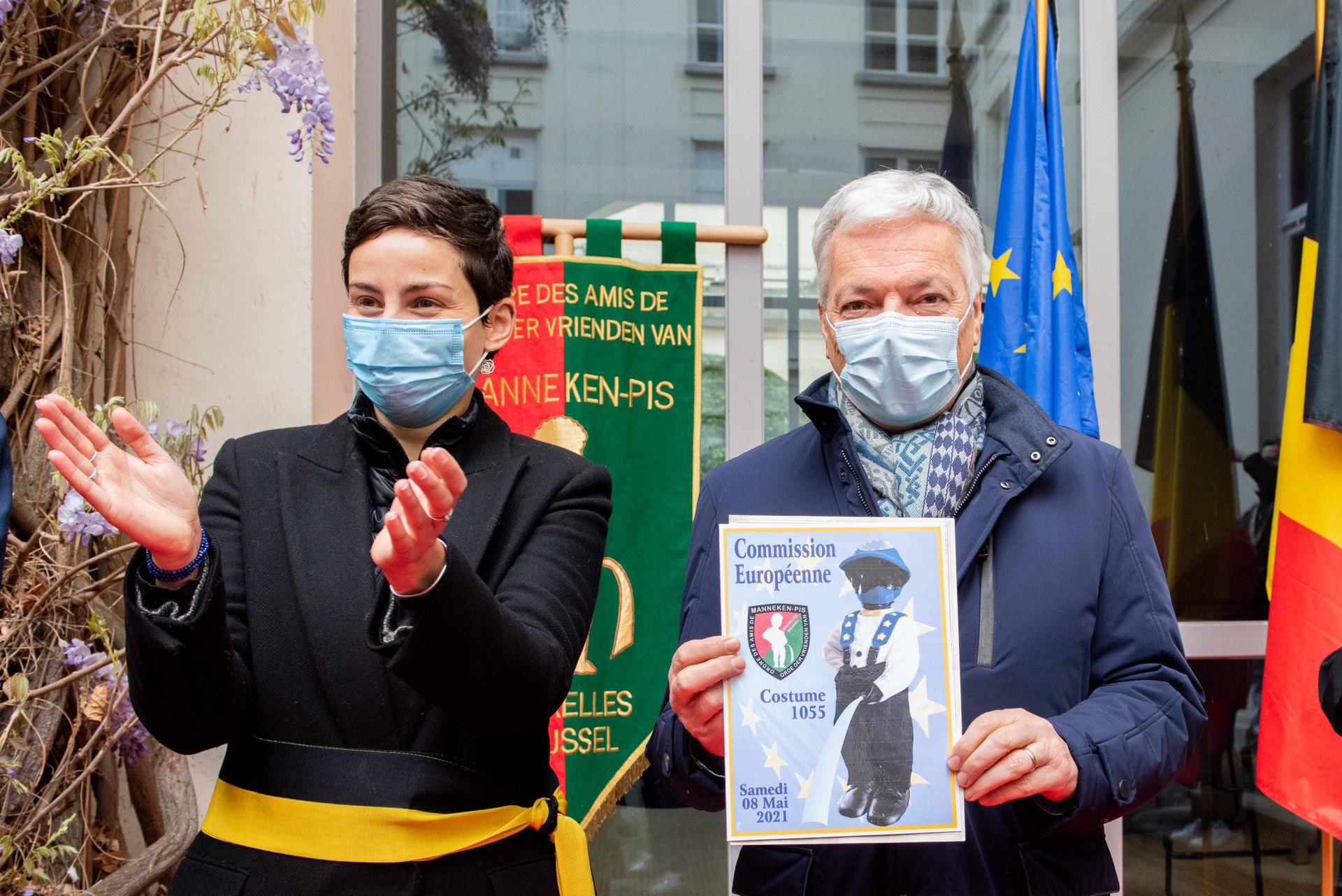 On the eve of Europe Day, celebrated every year on May 9, Didier Reynders, Commissioner for Justice, and Stefaan De Rynck, Head of the Representation of the European Commission in Belgium, officially presented to Philippe Close, Mayor of the City of Brussels, and Delphine Houba, Deputy Mayor for Culture, Tourism and Major Events, the brand new European costume for the Brussels Manneken-Pis.

This Manneken-Pis costume, kindly donated by the European Commission, reminds us that Europe must remain united in the face of the pandemic. We all share a common history, values and goals

The award ceremony took place in the courtyard of the Maison Patricienne, rue du Chêne 10, on Saturday, May 8 at 3:00 pm. The official dresser of the Manneken-Pis adorned the famous statuette with its new outfit. The Commissioner and the Alderwoman inaugurated it, in the presence of some members of the band of Meyboom and in the respect of the sanitary conditions.

“And even if we belong to different cultures, we must never forget what this Europe offers and brings us: solidarity, peace and prosperity. So many values shared and defended by Robert Schuman in his famous speech of May 9, 1950. And I am sure that our Brussels ketje – in short, European! – is very proud to know that the Commission is now presided over by a woman and that it has equal representation,” said Delphine Houba.

On this special day, let us remain more than ever united in diversity, as the motto of the European Union reminds us

The Mannenken-Pis is an essential figure of Brussels and is an integral part of its historical, folkloric and cultural heritage. This costume, created by Esmeralda Ammoun, is the 3rd costume offered by the European Institutions. It is also the 1055th costume of the Manneken-Pis and the 2nd which was offered to him since the beginning of the year in 2021 (after that of the Covid Boys).

It is composed of a pair of black shoes, black pants, a white shirt, a yellow bow tie, a pair of blue suspenders with luminous stars, a Covid mask and a starry cap.

May 9, 1989 – “European supporter Fête de l’Europe, First Citizen” costume. This first European costume (and 465th Manneken Pis costume) was offered by the Delors II Commission in order to highlight the presence of what was still the European Economic Community in Brussels.

Every year on May 9, Europe Day celebrates peace and unity in Europe. This is the anniversary of the “Schuman Declaration” in which Robert Schuman, then French Foreign Minister, proposed a new form of political cooperation for Europe that would make war between the nations of the continent unthinkable. 2021 is also the 70th anniversary of the Treaty of Paris establishing the European Coal and Steel Community (ECSC), the first of the supranational European institutions that would give rise to the “European Union” of today.