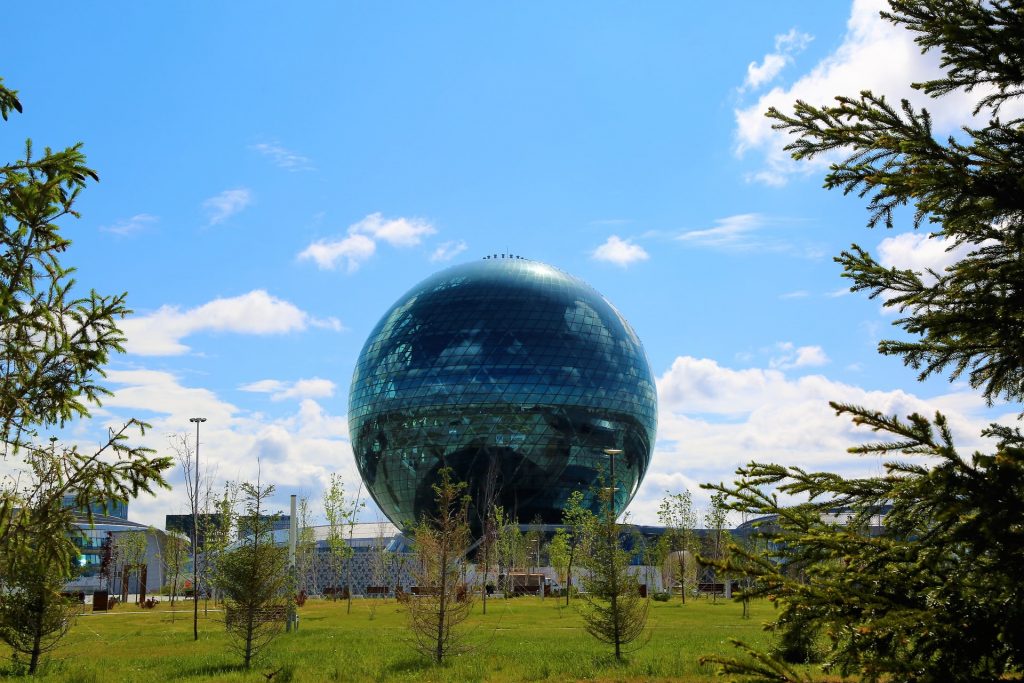 Nur-Sultan, known as Astana before March 2019, is the capital city of Kazakhstan. Kazakhstan’s Capital City Day is an official public holiday celebrated every year on July 6. An official estimate from 2020 reported a population of over 1.1 million people. It is located in the north-central part of the country, along the Ishim River. Located in the center of Kazakhstan, the territory of Nur-Sultan exceeds 722 square kilometers with a population of more than one million.

Since becoming the capital of the country, Nur-Sultan has become a political, economic, and cultural center of independent Kazakhstan, as well as a major center of diplomacy, peacemaking and international development. The new capital has become well-known worldwide and has received global recognition – in 1999 it received the title “City of Peace” by the decision of UNESCO.

Over the 23-year history, the city of Nur-Sultan has transformed from a provincial town into a regional economic powerhouse.

In monetary terms, GRP indicators have been continuously growing for twenty-two years, having slightly decreased in 2020 due to the global Covid-19 pandemic. In 2020, the production of goods contributed 14% of the total GRP, while the production of services contributed 81%. The rest is taxes on products. As such, services of various types – trade, real estate transactions, finance and insurance provide more added value than production.

84,067 enterprises are registered in the city, of which 305 are large, 504 are medium, while 83,230 are small. In comparison to 1999, their number has increased by 13-fold. Most of the enterprises work in the trade, construction, education, telecommunications, and manufacturing sectors. The business sector is the main employer in the capital – every third resident of Nur-Sultan is employed by the private sector, contributing about 50% of GRP. The business sector provides approximately half of tax revenues.

The city’s favorable location in the center of the Eurasian continent makes it an economically advantageous transport, communication, logistics and financial center – a natural bridge between Europe and Asia and a point of integration into the global economy for the region. It is for this reason that the capital has become the largest business center in Kazakhstan, with industrial production increasing more than thirty-fold. It is also why Nur-Sultan became an obvious location for the Astana International Financial Center, the first organization of its kind in the region.

As well as a hub for finance, trade and transportation, Nur-Sultan is also a hub for innovations, green technologies, and sustainable development, a role which the city performed perfectly when it hosted EXPO-2017, which with the participation of around 100 countries focused on the theme of future energies. Now, the International Center for Green Technologies and Investment Projects is continuing the legacy of EXPO-2017.

2. Nur-Sultan as a hub of diplomacy

Nur-Sultan has become a centre for diplomacy where regional and global initiatives are launched to promote security and cooperation, enhance trade, and encourage sustainable development. Nur-Sultan is where Chinese President Xi Jinping announced the creation of the One Belt One Road, an initiative which Kazakhstan greatly contributes to. It was also where the proposal to establish the Eurasian Economic Union was made.

In 2010, Nur-Sultan hosted the Organisation for Security and Co-operation in Europe (OSCE) Summit. Following this meeting, the Astana Declaration was announced, which put forward a bold vision for the future of Eurasia.

The capital of Kazakhstan has also hosted important regional security and cooperation summits of the Conference On Interaction and Confidence-Building Measures in Asia, the Shanghai Cooperation Organization, the Commonwealth of Independent States, the Collective Security Treaty Organization, the cooperation Council of Turkic-speaking states, as well as the first working consultative meeting of the heads of state of Central Asia. Major inter-parliamentary forums are also held in the capital.

The city has hosted several rounds of the Astana Process, which remains one of the only platforms that brought together all the main parties in the Syrian crisis. In the sphere of ethnic and religious harmony, the capital continues to host the triannual Congress of Leaders of World and Traditional Religions, recognized as a major international platform for inter-faith dialogue.

3. Tourism and culture of Nur-Sultan

Nur-Sultan also houses an opera, a symphony orchestra, museums, and shopping malls. with a unique mix of futuristic architecture. It is home to many impressive government buildings, such as the Presidential Palace, Parliament House, and the Supreme Court.

Some spots include the Bayterek, a 97-metre-high monument and observation tower completed in 1997. It embodies a Kazakh folk tale about a mythical tree of life and a magic bird of happiness. The height of the tower commemorates the year that Nur-Sultan became the nation’s capital in 1997.

Other unique architectural structures include the Palace of Peace and Accord, designed by the famous British architect Norman Foster and made in the shape of a pyramid; the “Khan Shatyr” shopping and entertainment center – the tallest tent-shaped building in the world; the most remote from the sea aquarium – “Duman”; the Opera and Ballet Theatre “Astana Opera”; the largest mosque in Central Asia “Hazret Sultan”; the Cathedral in honor of the Dormition of the Mother of God; the Roman Catholic Cathedral of the Archdiocese of the Blessed Damosel Mary; the synagogue “Beit Rachel Khabad Lyubavich”; the Central Concert Hall “Kazakhstan”; the monument “Kazakh Ely”; the Museum of Contemporary Art and the Presidential Cultural Center.

The city’s Modern Art Gallery is located in the now iconic Palace of Peace and Harmony, often referred to as the Pyramid. This open-style granite and glazed glass pyramid was designed by renowned British architecture firm Foster and Partners and opened in 2006 to host the Congress of Leaders of World and Traditional Religions.

More traditional arts can be found in the Maxim Gorky Russian Drama Theater. This theater was founded in 1899 and is one of the largest and most popular drama theaters in Central Asia. It regularly presents performances of William Shakespeare, Tennessee Williams, Anton Chekhov, Nikolai Gogol and others.