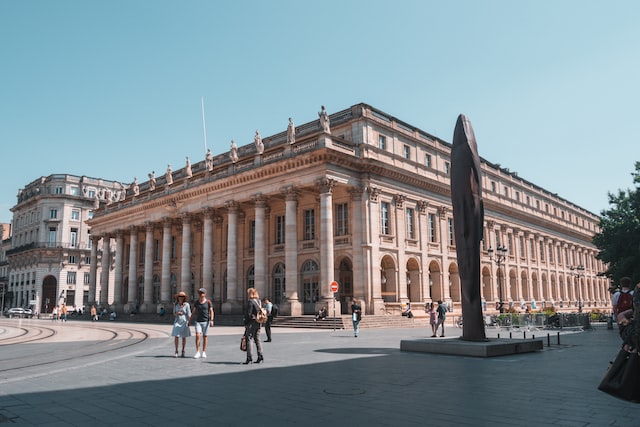 International tourists are coming back to Bordeaux

After two years marked by the pandemic and its associated restrictions, international travelers are now returning to Bordeaux. While the summer season is not yet over, the Bordeaux Metropolitan Tourism and Convention Bureau (TB) has identified some major trends that have led to a solid recovery observed since early spring. The occupancy rate has been “excellent” in the Bordeaux hotel industry, even exceeding its 2019 level.

The occupancy rate reached 80% for the month of June, “traditionally one of the best months of the year,” according to the TB. It’s reached 74% in July and August, exactly the same results as in 2019. The extension of the length of stay and the opening of new hotels (1,100 additional rooms in two years) has favored the increase in the number of hotel nights (+1.6% in June and July).

We’ve seen foreigners coming back since the beginning of spring, with Americans in particular coming back in full force.

Another structuring trend noted by the Bordeaux Tourism Office is the return of foreign visitors, particularly from Europe. Although visitors from France are still the majority, foreign tourists represent nearly 30% of hotel arrivals. They come mainly from Europe, particularly from Spain (the largest source market this summer), but also from Italy and Portugal.

Travelers from northern Europe (Germany, Belgium, Netherlands) are are not as numerous yet “with volumes close to 2019,” noted the TB. Except for the British, who had been absent for the past two years, and who are once again the second most represented foreign nationality in Bordeaux despite a significant decline compared to 2019 (-30%). Long-haul visitors, on the other hand, “are taking a little longer than Europeans to come back”, despite some strong numbers from the US market.

The absence of Australian and Asian tourists, down sharply (-85%), impacts the wine tourism activity, “Anglo-Saxon and Asian visitors are the first customers of excursions in the vineyard,” according to the TB. The city’s tourist attractions also seem to have been popular, with 12,000 Bordeaux CityPasses sold between June and August.

The tourist office anticipates a “promising” September, with 61% of Bordeaux professionals expecting to see an increase in reservations. Business will be supported by several major conferences (32nd Conference of the European Society for Biomaterials, 34th COBATY Federal Congress, 18th Echo Cardio Bordeaux Days).