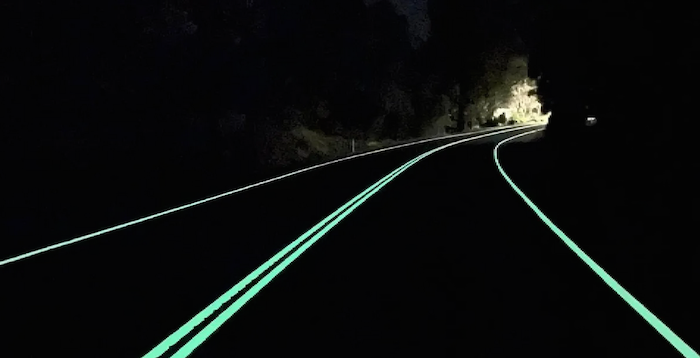 An Australian company has developed glow-in-the-dark road markings. The invention, which has gone viral on social media, has been developed by an Australian company called Tarmac Linemarking, in collaboration with OmniGrip and Vic Roads. What it accomplishes is that road lines glow in the dark thanks to the simple principle of photoluminescence.

The Australian company has already begun trials with this paint on a stretch of road in rural Australia. Pictures of the illuminated line markings can be seen in a Facebook post published on the 5th of May, 2022. It quickly collected more than 10,000 likes and 3,400 comments.

This treatment will give drivers more time to react and prevent them from drifting out of their lane.

Photoluminescence is not new. It can be found in stickers, toys or glow-in-the-dark children’s watches. But this is the first time we’ve seen it applied to roads. These road markings absorb and store daylight. When light levels drop, they emit the stored light creating a line or marking with improved visibility compared to standard painted lines.

According to Tarmac Linemarking, “This treatment will make it easier for drivers to see road markings or signage better and provide sharper definition when approaching intersections and curves, giving drivers more time to react and preventing them from drifting out of their lane.”

When used on roadways, bike lanes or parking lots, the headlights of each passing vehicle reactivate the safety route marking and pavement marking, extending the longevity of the enhanced line of sight. In daylight, road markings look and function like ordinary lines, but in dark conditions they emit stored light that enhances their visibility and the resulting safety benefits for road users.

The system is reminiscent of the futuristic highway system in the movie Tron (starring Jeff Bridges, released in 1982), where vehicles traveled along roads with only the edges illuminated. Or, if you’re younger, its sequel, which was released in theaters in 2010, will come to mind.

The company claims that its lines glow during “most of the night,” although it admits that the intensity of the glow may be lower after cloudy days.