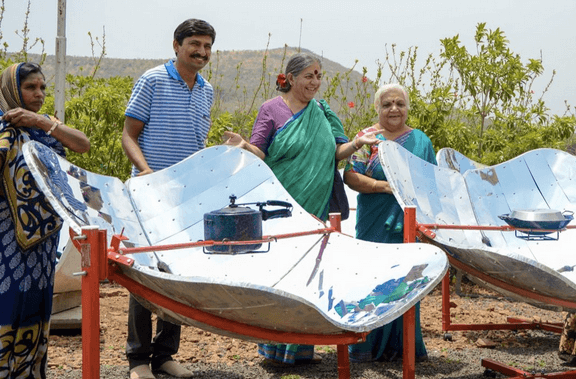 Did you know these low-cost ovens made with mirrors produce no carbon emissions?

Solar cookers use mirrors to concentrate the sun’s energy. To cook food they work even under slightly overcast skies. Solar cookers are cheap and they eliminate the need for polluting and solid fuels. A basic oven can be built using cardboard and tinfoil.

This simple technology is good news for the health of both the planet and society. It also reduces air pollution and CO2 emissions. Fewer trees are cut down for fuel. Each solar cooker can save up to 1 tonne of wood every year. And because they use a free power source, these cookers tackle energy poverty too. There are more than 4 million solar cookers in use around the world. But 2.6 billion people still cook over wood, animal waste, charcoal or kerosene.

Every year 4 million people die prematurely from breathing the air and exhaust of domestic cooking with these kinds fuels which generate harmful particles in the air. Solar Cookers International reported that $1.3 billion could be saved each year by reducing household air pollution through the use of solar cooking.

According to the World Economic Forum, charities and NGOs around the world are working to increase access to clean cooking, including the Clean Cooking Alliance, which supports women entrepreneurs as advocates in the clean cooking sector.

According to the World Health Organization (WHO), a third of people on the planet (2.6 billion) lack access to clean fuels, instead cooking on polluting open fires or simple stoves fueled by kerosene, biomass (wood, animal dung and crop waste) and coal. Inhaling these toxic fumes kills more people than malaria. Women are disproportionately affected.

The WHO’s latest data estimates around 3.8 million people die each year from illnesses, including pneumonia and lung cancer, linked to household air pollution (HAP) from cooking over stoves indoors with these solid fuels and kerosene. In sub-Saharan Africa, more that 80% of the population has to rely on these fuels.

Indoor smoke can be 100 times higher than the acceptable level of fine particulate matter (PM 2.5) and it affects women and young children more because they spend more time around the stove, according to the WHO.

In children under five, 45% of pneumonia deaths are caused by inhaling soot, says the WHO, while women exposed to high levels of indoor smoke are more than twice as likely to suffer from chronic obstructive pulmonary disease than women who use cleaner fuels and technologies.

According to the International Energy Agency (IEA), around 50 million people in developing countries in Africa and Asia reverted to traditional use of solid biomass for cooking in 2020. After nearly five years of progress, the number of people without access to clean cooking increased by 30 million between 2019 and 2021.

The IEA’s World Energy Outlook 2021 report said this shift, “together with the increased time spent at home due to Covid‐19 lockdown measures, increased exposure to air pollution and the associated health risks”. The IEA called for international efforts and financial commitments to achieve the UN’s goal of universal access to clean cooking by 2030.

Although Africa is only responsible for 3% of global greenhouse gas emissions, cooking with biomass contributes to global black carbon emissions, which is one of the largest contributors to climate change after carbon dioxide.

According to the Intergovernmental Panel on Climate Change (IPCC), replacing traditional open fires with improved cook stoves (ICS) globally, could mitigate between 0.6 and 2.4 gigatonnes of carbon dioxide equivalent each year.