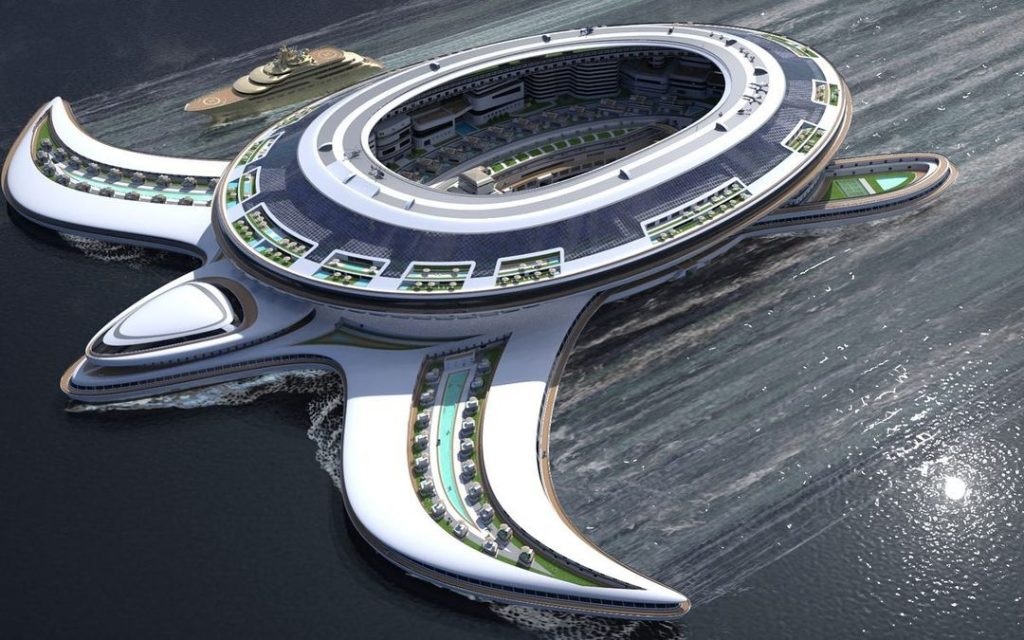 A futuristic itinerant floating city with the shape of a giant turtle could soon become a reality. Designed by Pierpaolo Lazzarini, the Pangeos comprises various hotels, shopping centers, parks, ship and aircraft ports, and all other facilities needed to house up to 60,000 guests in the middle of the sea. If realized, the vessel will become the world’s largest floating structure ever built.

The Terayacht takes its name from Pangea, the supercontinent that existed millions of years ago during the late Paleozoic and early Mesozoic eras. Pangeos extends its length for 550 meters (1,800 ft) and measures 610 meters (2,000 ft) at its widest point: the wings.

The Terayacht idea started in 2009, when Lazzarini conceived a giga yacht structure capable to host an entire city. According to the firmi, the Terayacht needs a Terashipyard: the coonstruction of a similar sizes’ vessel, involves the realization of a specific shipyard/dam infrastructure, that floods levitating the terayacht when it will be launched (estimated 2033). The imagined Terashipyard infrastructure that is 650 meters wide and 600 meters long, providing direct access to the sea.

According to CNN, the designers have posited Saudi Arabia as a location. Around one square kilometer of sea would need to be dredged and a circular dam constructed before the build could commence. Lazzarini has secured a space at King Abdullah Port, 81 miles north of Jeddah.

The hull is subdivided in about 30,000 cells.This space provide an unsinkable floating solution for the basement, which is composed by cluster compartments and connected by corridors.

The floating structure, subdivides the spaces in different blocks, and it’s capable to guest up to 60,000 accommodations. The impressive sizes of the Pangeos structure creates an unlimited possibility in terms of layout and facilities.

The Pangeos is conceived to be equipped with 9 HTS engines. Each motor is full electric, and it’s capable of 16,800 hp each. Obtaining the necessary energy from the various in-board energy sources, the megastructure will be able to cruise at 5 knots. To construct the terayacht — the biggest floating structure ever built on the planet — an estimated $8 Billion will be needed, with a timeline of approximately eight years.​​