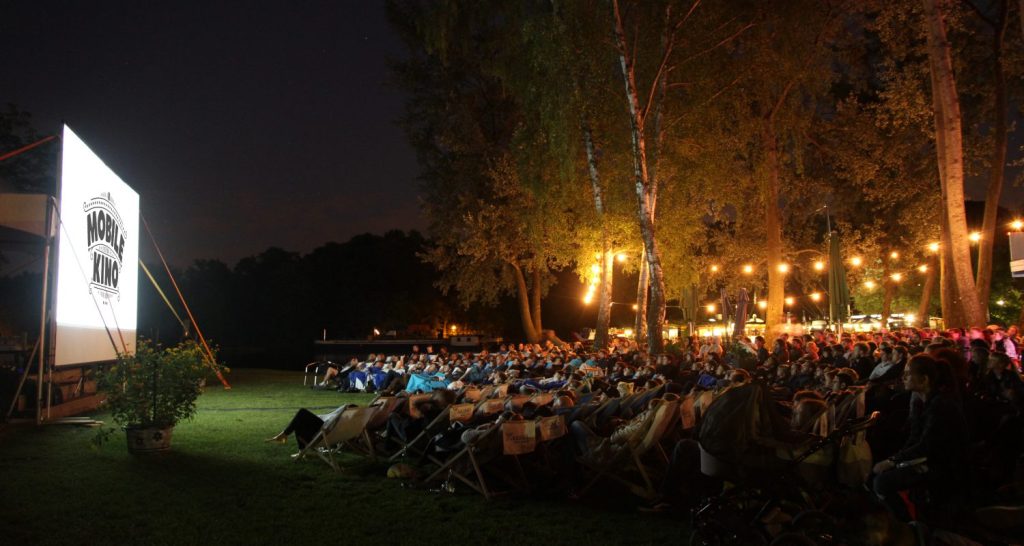 “Summer sun, something’s begun. But, oh, oh, the summer nights!” Famous words from a famous movie. With summer on our doorstep, it’s about time to start thinking about what you want to do these coming months. Maybe you’ll be travelling, maybe you’ll stay at home and wait until the summer crowds have gone before you go on a trip. But whatever you’re doing, be sure to make the most out of those endless summer nights. And what better way to do so than by watching a movie?

When we think about going to the cinema, we immediately think of a dark screening room packed with people, where breathing fresh air isn’t a given. We think of popcorn and rain, because it’s the ultimate weekend activity when the weather’s letting you down. We certainly don’t think of sunny summer days and beach chairs.

Yet, that’s exactly where we’re wrong. Watching a good movie on a big screen shouldn’t be the privilege of dark and rainy days. And it certainly shouldn’t be something we only do indoors. For decades now, outdoor cinemas have been a thing. Where before, they were often designed to be drive-in cinemas, now, the cars are almost gone and people are enjoying a good movie from their comfy beach chair. They’re popping up all across the globe, in the most unique locations. From rooftops to lakefronts, we’ve selected some of the coolest open-air cinemas throughout Europe for you to enjoy this summer.

Mobile Kino in Berlin is being advertised as “the travelling cinema” and that’s certainly true. Contrary to most open-air cinemas, this one isn’t tied to one place in particular. They’re constantly moving around, choosing some of Berlin’s coolest locations to screen their movies. Their planning is as diverse as their locations and their Lakeside Film Festival is the absolute high of the summer. From August 5 until August 7 they take over a former GDR holiday camp and convert it into a weekend film festival consisting of four large outdoor cinema stages. An event you don’t want to miss out on.

Bologna’s a city filled with history and therefore, the Cineteca di Bologna had to take place on the city’s most famous square Piazza Maggiore, smack down in the center of Bologna. You might also know the event as Sotto le Stelle del Cinema and every year, around fifty different movies are screened. On the program, you’ll find about everything going from silent movies to newly-released documentaries and everything in between. This year, the movies are shown every day from 18 June until 15 August at 9.45 PM.

Let’s be honest, Paris can be a very expensive city and it’s very hard to find free activities in the French capital. However, every year, for a month, the Cinéma en Plein Air de la Villette forms an exception to this rule. From 20 July until 21 August, all movie lovers can enjoy the best the French and international movie scene have to offer in the Parc de la Villette. This year, the central theme is ‘Dance’ so get ready to rumble!

Side note: the open-air cinema in itself is free, but if you want to be able to enjoy a chair and a plaid, you’ll have to pay 7 euros.

Most outdoor cinemas take place on a square or in a park, but London came up with something original. As the name suggests, the Rooftop Film Club is located on two rooftops across the city: the Bussey Building in Peckham and Roof East in Stratford. Here, you don’t just come to enjoy a good movie. The view in itself is worth your while because what better way to get to know a city than by viewing it from above?

There’s a great piece of history hiding behind this Armenian open-air cinema. Once, these grounds were occupied by the Saint Paul and Peter Church. Then, however, the Soviets came and decided to set up an open-air cinema instead. Ever since, the Soviet-style amphitheatre has been standing here and it’s going nowhere. Even though the building itself is open year-round, we suggest you pay it a visit during the yearly Yerevan Golden Apricot International Film Festival.