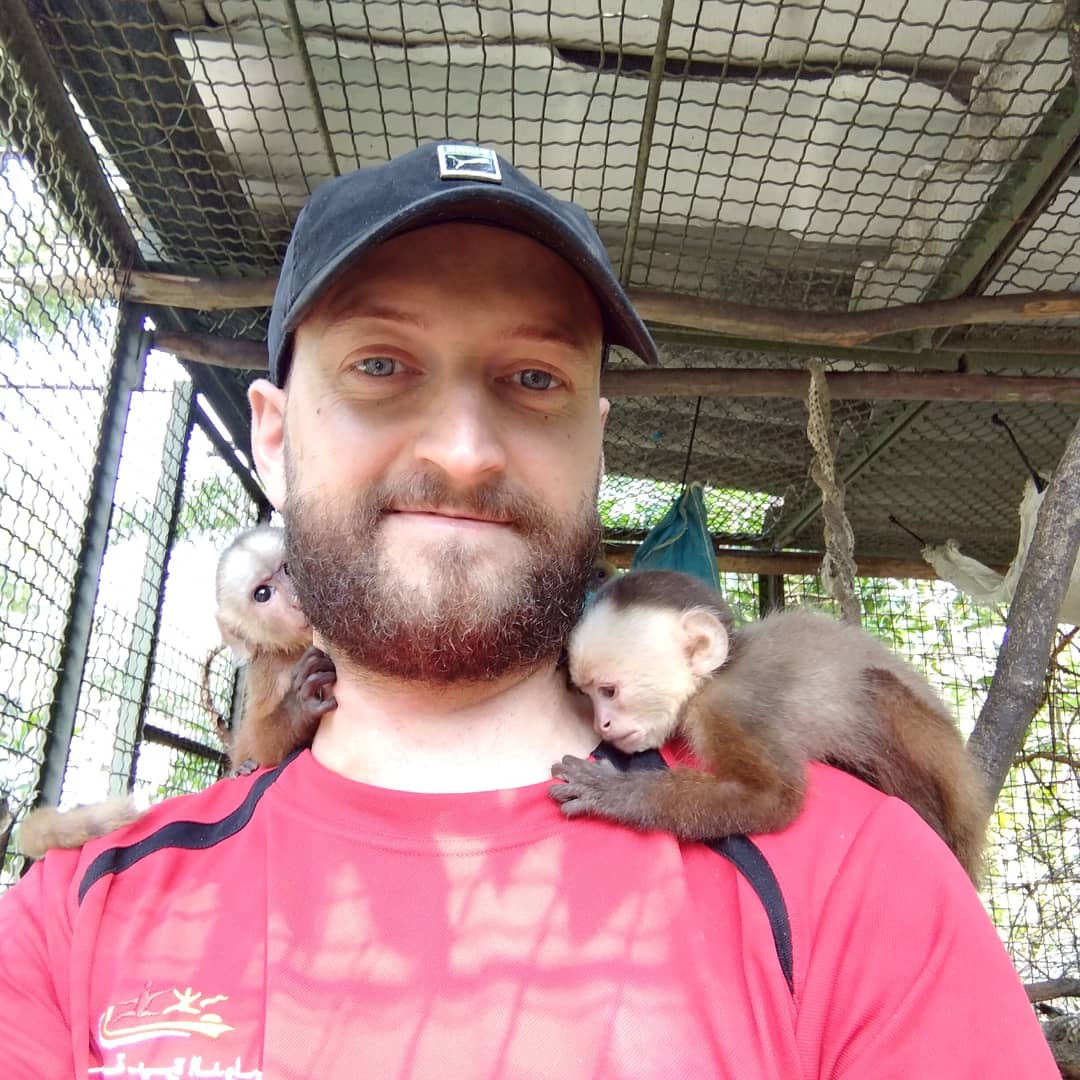 Deal signed for the construction of “ground-breaking green ship”

Ben Hall is an accomplished writer and photographer, specialising in travel, and has been widely published in leading print publications and online outlets in the Asia Pacific region. He has more than 25 years’ experience across all forms of media and began his career as a news journalist in Australia and has worked with News Corp, ABC TV and Sky News Australia, and in the UK with BBC World TV, Sky TV, APTN and News International, among others.

For some people, the ultimate getaway involves quality time at an infinity pool in an idyllic island setting, cocktail in hand, with wait staff standing by to deliver a refill. Not that there’s anything wrong with that, as quoted from the classic 1990s sitcom Seinfeld, but there’s an emerging breed of travellers who would rather pass on the poolside pina coladas and opt to hand feed an orphaned monkey or help rescued elephants back to health. The rapid rise in popularity of wildlife tourism is all part of a growing trend towards “meaningful travel” where people are looking for an opportunity to experience local cultures first-hand and make a real difference in critical projects and causes internationally.

For Briton Scott O’Connell, his animal conservation experience in Costa Rica was a life changing one which is becoming an increasingly popular way to travel. The 36-year-old from Leyland in Lancashire, UK, took part in a program called Sea Turtle Conservation in Costa Rica where he volunteered along the beautiful beaches of Ostional, nurturing sea turtle nests and their eggs.

It took me out of my comfort zone, I made new friends and had the opportunity to learn about, and work with, species of animals I had never seen before.

He was placed in the program by Global Work & Travel, one of the world’s leading youth work and travel platforms which also connects travellers with volunteer wildlife and community projects, along with working holiday trips, au pairing, teaching English, internship travel, tutoring, remote work and travel, and studying abroad.

Scott volunteered for four weeks at the Ostional Sea Turtle Reserve and his duties included daily beach cleans, night time patrols, and monitoring endangered green and leatherback turtles. “The highlight of my stay in Ostional was the rare discovery of a green turtle nest. We drove to the adjacent beach with the rangers and excavated the eggs before quickly transporting them back to the hatchery, where we buried the eggs in sand, giving them a much greater chance of hatching and surviving, away from the dangers of poachers and predators.”

After his sea turtle conservation experience, Scott took a break to go surfing at some of the country’s best breaks and joined a second conservation program through Global Work & Travel, the Sloth & Wildlife Rescue Sanctuary in Costa Rica’s second-largest city, Alajuela. His duties included feeding the animals and cleaning out the enclosures to help a wide variety of animals which had been injured or orphaned, many as a result of the illegal wildlife trade.

For travellers like Scott O’Connell, volunteering at animal rehabilitation and rescue centres overseas was driven by the desire to play a role in helping causes around the world. It also provides a genuine cultural experience with an opportunity to meet and make lasting friendships with local people – and have some fun. “Some unforgettable moments included working with Pinky the coati as she tried to adapt to her new enclosure mates, feeding two very friendly flightless parakeets every day, who often sat on my head whilst waiting for food, and also going on night time river walks with Andreas, the vet,” Scott said.

Rachel Short, 24, of McLean in Virginia, USA, took part in a monkey rehabilitation program in South Africa, working with orphaned babies and helping nurse them back to health. Rachel spent four weeks with the Vervet Monkey Foundation (VMF) in Tzaneen in the north east of South Africa which provides rescue and rehabilitation of orphaned vervet monkeys of all ages, especially the large numbers of babies that lose their mothers.

The foundation has more than 500 vervet monkeys who are ex-laboratory or unwanted pets or who’ve been orphaned, injured and abused. Rachel was one of around a dozen volunteers who helped in the rehabilitation process, nursing the baby monkeys back to health, to give them a second chance at life. Rachel was able to take part in the “baby shifts” at the centre, observing and recording their behaviour while being given the opportunity to hold them.

The VMF has successfully rehabilitated hundreds of babies and it helps return an orphaned monkey back into the wild in four to eight weeks. This is achieved by introducing a baby to a female in one of the resident troops living in the natural environments at the centre. For Rachel, working with adorable animals and helping them get back into the wild was just one uplifting aspect of her trip.

One of my favourite things about volunteering was meeting all the other people. I wasn’t sure what to expect, but when I got there everyone was so welcoming. After just one month, I made some great friends that I will keep in contact with for a long time.

As with many wildlife programs, Rachel and her fellow volunteers were given time off to explore their local area and even do a few “touristy” things so their experience is not all work and no play. “I met so many new people here and forged great friendships with them. It was sad to have to say goodbye.” Rachel will also complete two more volunteer stints through Global Work & Travel, The Big 5 African Wildlife and Conservation program and working in a community in Tanzania. She then intends to take a working holiday trip to New Zealand.

Savanna Stirling, 23, of Ireland, lived and worked in authentic Thai villages and cities, rescuing and rehabilitating elephants and the occasional stray dog as part of the Elephant Rescue & Rehabilitation program through Global Work & Travel in Chiang Mai, northern Thailand.

“This was a once in a lifetime trip, working with elephants, exploring Thailand and being in the Thai jungle!” Savanna said. Savanna chose to make a difference by helping elephants who have been rescued from illegal trade and poachers, while experiencing Thailand’s traditional lifestyle. She was responsible for preparing and cleaning the elephants’ food, helping with general maintenance tasks around the park, as well as construction, maintaining mud pits and helping out in the local villages.

Meeting and caring for the elephants at the elephant nature park was incredible, the gentle giants have so much love even when faced with such adversity as they do in the tourist world.

Savanna described her experience working with elephants in a Thai jungle as “truly humbling” and says she also made many lifelong friends. “I couldn’t recommend this trip more, it was something I will never forget and I most certainly will do it again in my lifetime.”

For Tracey Ricketts, of Herne Bay in Kent, UK, her experience on the Big 5 African Wildlife & Conservation program in South Africa’s stunning Eastern Cape provided the 49-year-old with the “time of her life”.

She was one of around 18 volunteers from the UK, Germany, Netherlands and the USA. Tracey and her co-volunteers were involved in tracking the movements of wild herds of animals across the 6,000-hectare private game reserve in an open-top safari. She was able to spot the ‘Big 5’ – elephants, rhinos, buffaloes, lions and leopards – in their natural habitat and contribute to an important, real-world research and conservation project by helping with park management. “We had close encounters with a rhino that came very close to our jeep and every night you could hear the lions roaring and the monkeys running across the accommodation roof in the morning which was pretty cool,” Tracey said.

All I can say is that I had the best time of my life. To be so close to the animals was just unreal and to watch them in their natural habitat was just amazing.

“I stayed for a month and I could have stayed for longer. I cannot wait to go on my next volunteering adventure.”