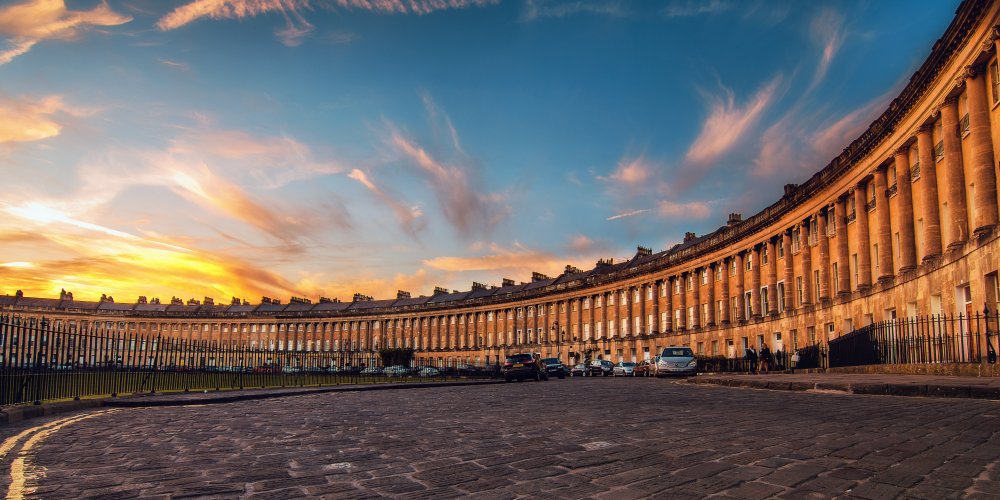 Destination, Get away, 🇬🇧 UK

Covid-19. What you need to think about when traveling with children this summer

The largest city in the English county of Somerset, Bath has been inscribed by UNESCO as a World Heritage Site since 1987. They city was first established by the Romans, who built temples around the hot springs here in 76BC, and over the ages the city has played an important role in English society, visible from its many appearances on film and TV. A visit to Bath offers everything from leisurely wanders along the city’s beautiful Georgian streets and impressive landscaped parks and gardens, to literature and culture related activities, tasty food and drink and of course gorgeously relaxing spas. What’s not to love? With lots to see, do, eat and drink, here’s some suggestions of where to start when in Bath.

Bath has many significant cultural and historic attributes to admire as you stroll through the city, however some in particular are worth highlighting. The Royal Crescent, a sweeping arc of Georgian townhouses made from warm, honey-coloured stone and fronted by expansive green lawns, was designed by John Wood the Younger to give well-off residents the feel of country living in the heart of the city. Another Georgian marvel, The Circus, is a 360-degree masterclass in design by John Wood the Elder, inspired by ancient pagan sites like Stonehenge and classical Roman architecture. It has long been one of Bath’s most sought-after addresses, with former residents including artist Thomas Gainsborough and English Prime Minister William Pitt the Elder. Meanwhile Pulteney Bridge boasts Italian inspired architecture (it is modelled on the Ponte Vecchio in Florence) and is lined with shops on both sides, a charming sight especially at night, and the broad thoroughfare of Great Pulteney Street is the longest and widest Georgian street in Bath, with the magnificent Holburne Museum standing at its end.

A trip to Bath must include a visit to the origins of the city, Bath Roman Baths. One of the finest historic sites in Northern Europe, the remarkably preserved remains show one of the greatest religious spas of the ancient world. The city’s unique thermal springs rise in the site and the Baths still flow with natural hot water. Take some time to explore; walk the original Roman pavements, see the ruins of the Temple of Sulis Minerva and learn about the bathing complex at the museum collection, which houses a gilt bronze head of the Goddess Sulis Minerva, among other Roman artefacts.

Another impressive sight, both historically and architecturally speaking, is Bath Abbey. This spot has been used as a place of worship for more than 1,000 years and King Edgar, the first king of all England, was crowned here in AD973. Many of the present-day Abbey’s most spectacular features are more recent, in particular the Abbey’s spectacular Victorian Gothic interior, the work of Sir George Gilbert Scott, who made numerous improvements between 1864 and 1874, including the addition of the soaring vaulted stone ceiling above the nave.

A great place to refuel for your busy day of sightseeing is Green Park Station, once one of Bath’s main train stations. Today it is home to a host of quirky shops, cafés and restaurants and hosts regular markets selling locally produced food and drink, independent art, vintage clothing and antiques. Browse the unique collection of wares and enjoy a tasty lunch before continuing on your way to explore the rest of the city.

Undoubtedly Bath’s most famous resident, author Jane Austen is highly celebrated in the city. The Jane Austen Centre offers a snapshot of what it would be like to live in the Regency times, from the fashion to the food and society, everything that would have inspired Austen’s timeless novels. Here you can explore how the city impacted her life and writing through the intriguing exhibition, all in the setting of a classically decorated Georgian townhouse. To really enter into the Jane Austen spirit you can dress up in the exhibition’s Regency costumes, bonnets, top hats and all! In a city that frequently appears in period dramas, from the film adaptation of Austen’s Persuasion to Netflix’s recent Bridgerton, the Jane Austen Centre is the ultimate period drama enthusiast’s experience.

A post shared by The Jane Austen Centre (@jane_austen_centre_bath)

Another influential spot on the Jane Austen tour of Bath is the Assembly Rooms. Back in its day this was an exclusive haunt of Bath’s rich and famous, who would gather here to dance, gamble and drink tea. Today the venue is fairly unchanged and you can visit to marvel at the grandeur. Wander through the opulent, chandelier-lit rooms and it’s easy to believe that the Georgians have only just left. Soak up the atmosphere with a delicious cup of tea and afternoon snack at the onsite café.

Another place for a lovely afternoon rest and refuel is Sally Lunn’s House located on North Parade Passage. Dating back to 1482, Sally Lunn’s is Bath’s oldest surviving house and its history stretches back even further, as excavations in the cellar have revealed artefacts left behind by the city’s early Roman inhabitants. Importantly, this is also the birthplace of the local delicacy known as the Sally Lunn bun, a large and generous but very light bun, a little like the French brioche. Of course a tasting of this Bath original is an essential part of any visit, and as it is about time for dinner, maybe sample a savoury pie too…

8. A stroll through the park(s)

Bath has many lovely parks of all shapes, designs and sizes, perfect for walking off some of that filling dinner! Prior Park Landscape Garden is an immaculately designed eighteenth-century landscaped garden created by Bath entrepreneur Ralph Allen, with advice from famed English landscape architect Lancelot ‘Capability’ Brown. Just a short distance from the city centre, it’s an oasis of calm filled with delightful lakes and winding wooded paths, as well as the famous Palladian Bridge, one of only three bridges of its kind in the UK. Back towards the city and perched on the summit of a wooded hill, Alexandra Park is one of the best places to go for views overlooking Bath and its surrounding countryside. You can reach it by by car or bus, or by climbing the zig-zag path to earn the park’s spectacular vistas. For more walks accompanied by gorgeous views, Bath Skyline Walk, which passes through Prior Park, is a must.

Last but certainly not least, a visit to a spa in Bath is not to be missed. Thermae Bath Spa offers not only revitalising treatments, relaxing pools and healing steam rooms, but a rooftop pool with incredible 360-degree views of Bath. Definitely worth the visit, if you can time it with the dusk I highly recommend it! There is something extremely calming about being immersed in warm water as you gaze out over a beautiful city, watching as the sun sets. Alternatively, treat yourself to a spa stay at the five-star Gainsborough Bath Spa, a luxurious hotel with its own naturally heated spa complex where you can stumble straight back to your room after your busy day.