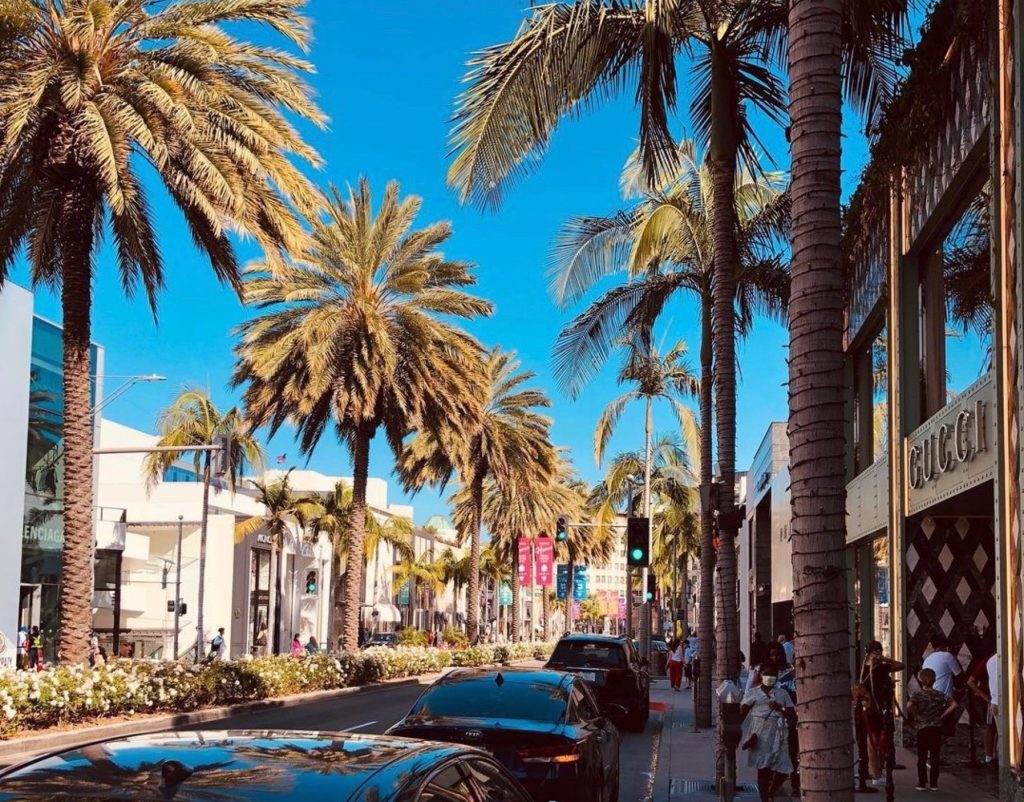 Are you looking for some expensive holiday shopping? There are several fashion meccas around the world where you can immerse yourself in the best high-end brands. Here we have rounded up 5 streets filled with luxury fashion brands and designer labels that will lighten your wallet.

Framed by the legendary Beverly Hills Hotel to the north and the Beverly Wilshire to the south, palm-dotted Rodeo Drive is with no doubt the world’s most famous luxury area. With more than 100 haute couture shops and luxury hotels that take up 3 city blocks, Rodeo Drive is an expensive walk. There, you will find names such as Hermes, Hugo Boss, Jimmy Choo, Chanel, Ferragamo, Miu Miu, Etro, Max Mara, and more.  The history of Rodeo Drive began in 1961,when Swiss-born American fashion retailer Fred Hayman opened the luxury boutique “Giorgio Beverly Hills” at 273 Rodeo Drive, becoming the Godfather of Rodeo Drive. By launching his luxury shop on this street, Hayman prompted others to do the same, including Gucci, Tiffany, Van Cleef & Arpels, and Vidal Sassoon. Today, more than 60 years after the opening of the first boutique, Beverly Hills attracts the world’s most famous movie stars, artists, and philanthropists willing to live a unique shopping experience.

Situated in between the Champs-Elysées and the Seine river banks, Avenue Montaigne is the kingdom of high-end fashion stores. In the early 18th century, the street was called “the allee des Veuves” (widows’ alley), due to the women in mourning who gathered there. But in the 19th century, the street earned a new reputation and was renamed after Michel de Montaigne, a writer of the French Renaissance. In 1913, Avenue Montaigne earned more popularity thanks to the opening of the Théatre des Champs-Elysées and the Plaza Athénée hotel. But what contributed the most to its fame was the opening of Christian Dior’s store at 30, avenue Montaigne, right opposite the theater. Today, the large Dior fashion store is still there on the first floor of Dior Head office. Several other luxury fashion brands have opened a flagship store on Avenue Montaigne. The street is filled with popular French brands including Chanel, Cloé, Dior, and Louis Vuitton, as well as international names such as Valentino, Versace, Prada, Armani, and Ralph Lauren.

Tretyakov Drive (or Tretyakovsky Proyezd) is a short street located in Kitay Gorod, an old historic and commercial district in the heart of Moscow. The area started its development in the late 70s of the 19th century and was named after well-known Moscow businessmen and art collectors Tretyakov brothers. Originally, the street was built as an alternative way to enter Kitay Gorod. The Tretyakov brothers had their own shops in Kitay Gorod, and hence decided to finance the construction of a new street. Today, Tretyakov Drive is considered one of the most expensive streets in the world, where it is common to meet famous Russian actors, singers, and other celebrities. Some of the most renowned names include Ferrari, Bentley, Bulgari, Armani, Prada, Brioni, Roberto Cavalli, among others. The entrance of the street is marked by a beautiful archway in Medieval style. In the middle of the drive there is another historical feature: A monument devoted to the first Russian book printer Ivan Feodorov.

The origins of the Fifth Avenue dates back to the end of the 19th century, when expensive private residences started to appear in the area. These residences were owned by well-heeled families, who showcased their richness through huge splendid mansions. In the first years of the 20th century, the first luxury hotels started being constructed along the avenue, financed by some of the rich families who owned the mansions just a few blocks away. Luxury retail shops followed, slowly transforming the avenue in the shopping district as we know it today. Saks Fifth Avenue opened in 1924, Bergdorf Goodman opened at its present location in 1928, and Tiffany & Co, which was originally situated on 34th and Fifth Avenue, moved up to its current location on the corner of 57th Street in 1940. In a few decades, Fifth Avenue had become the world’s top luxury retail street, and so it remains. Some of the most renowned designers who have opened their boutiques include Armani, Channel,  Dior, Dolce & Gabbana, Louis Vuitton, and Ferragamo. More recently, the area has also been invaded by midscale brands and  suburban malls, such as Disney Store, Abercrombie & Fitch, H&M, and Zara.

Milan, the world’s fashion capital, has no shortage of haute couture shops and high-end boutiques. Most of these are located on Via Monte Napoleone, the most renowned street in the city’s fashion district. Giorgio Armani, Gianni Versace, Salvatore Ferragamo, and many other Italian and international fashion designers have shops along this street. Many of the fashion brands also have their headquarters and offices there. The beautiful Via Monte Napoleone traces the old city walls built by Roman Emperor Maximian. At the beginning of the 19th century, the street was reconstructed in a neoclassical style. After World War II, Via Monte Napoleone became Milan’s most sophisticated fashion destination. Via Monte Napoleone is also a great area to soak up Milan’s vibes while enjoying an elegant meal or sip a glass of authentic Italian wine.