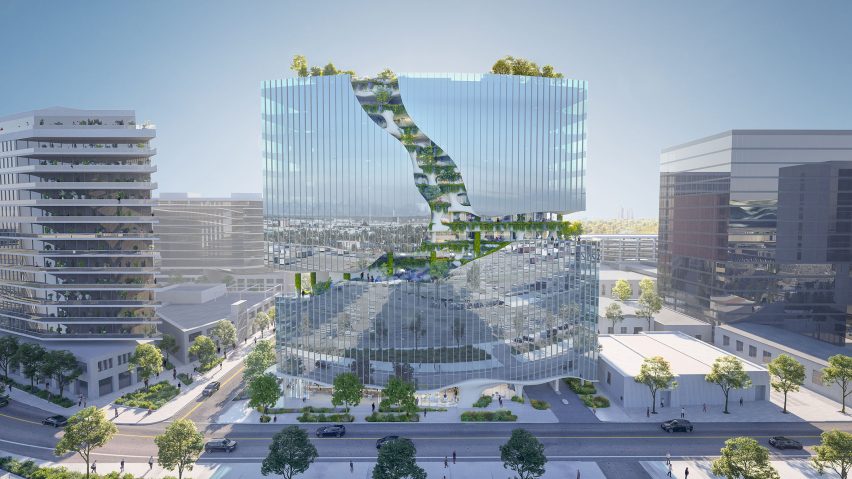 Are you ready to embark on a journey on the Danube Express?

The most prominent feature of the glass-clad structure is a series of cutouts at the front of its gently curving volume, described by the project team as a “landscape crevice,” which will span 10 stories and house planted terraces and water fountains.

According to Travel + Leisure, this is MAD Architects’ first residential project in the US; it has the potential to become an architectural masterpiece. The architect Ma Yangons and his Beijing MAD architects studio are famous for projects that mimic the natural world.

If we consider modern cities as man-made landscapes on earth, we need to design canyons, woods, streams and waterfalls, turning concrete forests into a second nature.

A portion of the crevice has been likened to a nature trail and rises four stories above the building. This gorge is part of 13,000 square feet (1,200 square meters) of outdoor amenity space to be enjoyed by residents of the 187 rental units.

Often following the Chinese principle of shan-shui, a traditional style of landscape painting, MAD’s portfolio includes buildings that look like mountains – like Huangshan Mountain Village – clouds, like its Cloud Center, boulders – like its Shenzhen Bay Culture Park – and even an airport terminal that looks like a snowflake.

For One River North, the company specifically took influences from the nearby Rocky Mountains, which will be visible from the rooftop deck that features a pool, spa and garden.

The ninth floor will house a fitness center and yoga studio, which will also connect to the outdoor terraces. The one, two and three bedroom units will benefit from floor-to-ceiling windows and private balconies.

This will be MAD’s second residential project in the United States, following the Gardenhouse complex in Beverly Hills, which looks like a hilltop villa. The firm recently unveiled plans for an office tower in Hollywood with a funicular railroad that would run overhead.