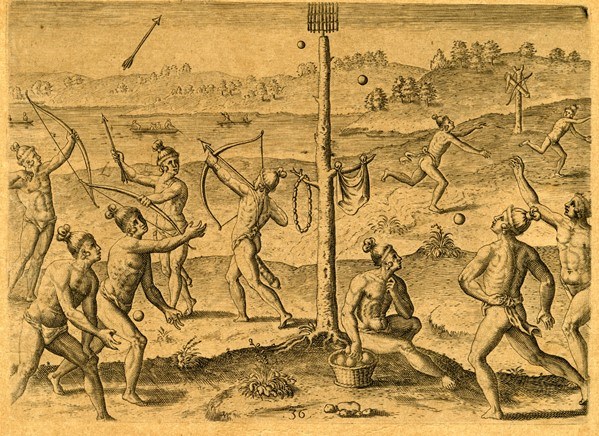 The 9 most sustainable destinations in Portugal

The Timucua tribe was Florida’s largest group of Native Americans, settled in the Northeast and North Central parts of what is now the Sunshine State. The earliest evidence of the Timucuan people dates back to around 3000 BC. Their name probably derives from the Spanish pronunciation of the Timucuan word “atimoqua” which meant “lord” or “chief.” The Timucua occupied around 19,000 square miles of land and were organized into numerous tribes speaking different dialects of a common language. In the 1500s, when Europeans first arrived in Florida, the Timucua’s population included around 200,000 and 300,000 Native Americans. However, by 1800, the Timucua had completely vanished.

Evidence about the religion of the Timucua is scarce since they kept many of their beliefs and religious practices secret from the Europeans. In addition, French and Spanish settlers destroyed most evidence of Timucua religion, in an attempt to convert them to the Christian beliefs. However, archaeologists were still able to deduce basic information. We know that the Timucua worshipped the sun and the moon, and that the shamans had the greatest religious power. Shamans were believed to be able to predict the future, control the weather, and even curse or cure people. Most shamans were not only spiritual guides, but they were also doctors or herbalists. Shamans played an important role in all aspects of life, from planting crops, to hunting, to helping women give birth. The Timucua believed in omens. For this reason, random events were interpreted as if they had a deeper meaning about the future. When the Spanish missionaries settled in Florida, they established missions near the Timucuan territories. There, the Timucua were taught Spanish and baptized. By the end of the 1500s, any evidence of their native religion had disappeared.

During the fall and the winter, the Timucua lived in the inland forests. There, they grew much of their own food. The most important crops to the Timucuan people included pumpkins, cucumbers, peas, gourds, maize, beans, as well as other fruits, berries, and starches. During the growing season, Timucuan farmers would cultivate only enough food to survive around six months of the year. But agriculture was not the only activity of the Timucua. They were also agile hunters and fishers. They hunted deer, alligators, bears, turkeys, and bison. Animal bones were converted into useful tools, such as weapons. During the summer months, they would migrate closer to the seashores, where they would fish and collect shellfish and oysters. The oyster shells, together with other food trash, were stacked in mounds generation after generation. The mounds are still visible today in Florida’s coastal areas, and they offer important information about the Timucua’s diet. Additionally, archaeological findings suggest that they were skilled at building canoes to catch fish. The Timucua used the fat derived from fish as an oil or as a kind of butter. When Europeans arrived in Florida, they brought their own fruits and vegetables with them. There is archaeological evidence showing that the Timucua adopted many of these European crops, including wheat, sugarcane, garlic, and sweet potatoes.

According to the descriptions of European explorers, most Timucuan people had dark long hair and light brown skin. During the summer, the men were used to wear a loincloth wrapped around their waist. Timucuan women wore a very similar garment, together with another covering on their top, which was made of deerskin or moss. During colder months, the Timucua did not replace their clothing. Instead, they added many layers. To keep their legs warm, they wore a sort of leggings, while to protect their arms, they wore matchcoats made of animal skins or feathers. Both men and women had tattoos, which were considered a status symbol. The more tattoos an individual had, the more status she or he had. Men would also paint their faces with a black painting. The Timucua kept their hair long. They cut it only when a chief died to show respect. They also wore jewelry, including necklaces and bracelets made from shells and pebbles. Both genders pierced their ears and used fish bladders as earrings. Warriors could decorate themselves with feathers, belts, anklets, and bracelets. Timucua’s chiefs and their wives dressed in a different way than the rest of the tribe. They wore fancier clothes with many ornaments, and they decorated their faces with a distinctive face paint design. The chiefs’ wives often decorated the skin around their mouths with a blue paint.

4. The end of the Timucua tribe