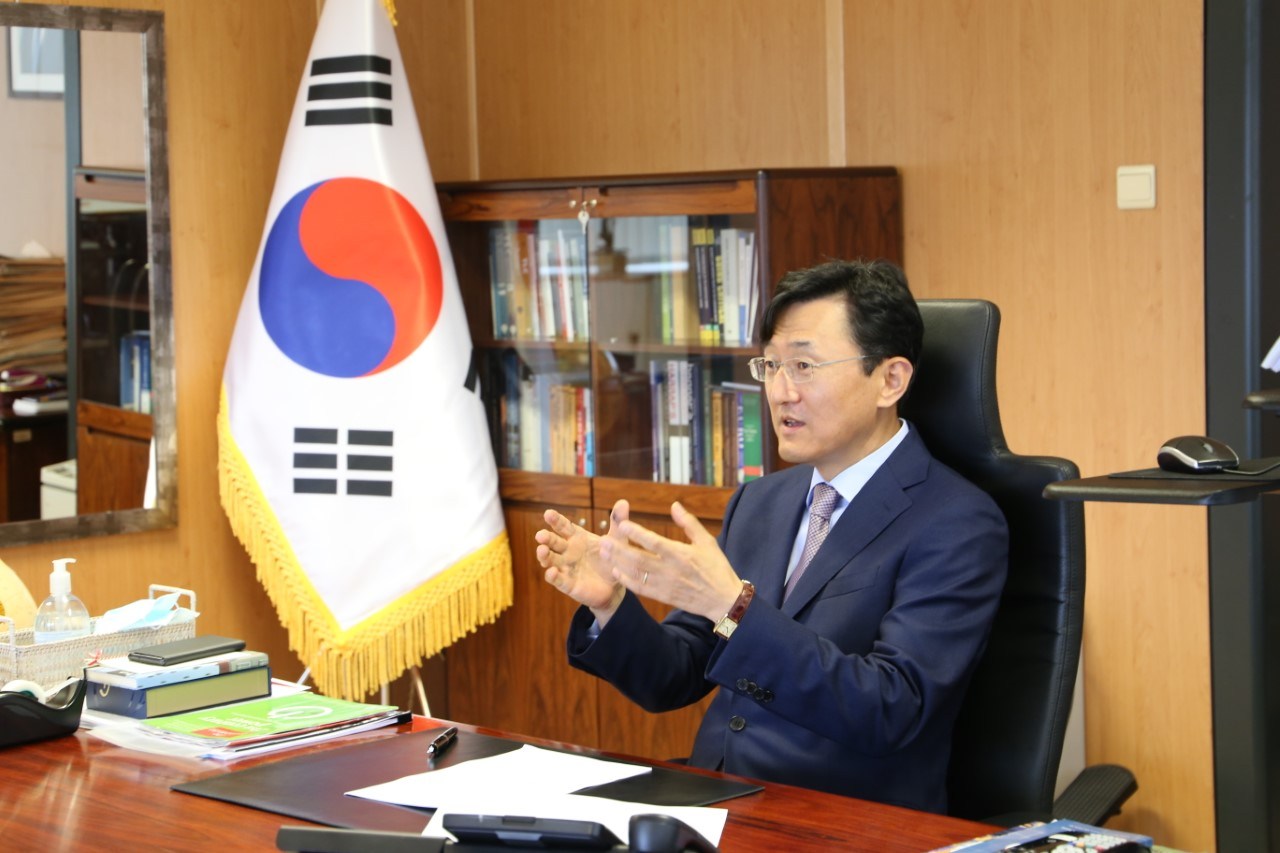 Ambassador Yoon Soongu: “As the situation continues to improve in the future we will be ready to welcome foreign tourists”

Belgium and Korea share a long-term friendship, and already in 1901 they signed their first bilateral Treaty of Friendship, Commerce and Navigation. In fact, Belgium was one of the first countries in the world to recognize the independence of the Republic of Korea. “120 years later, the relationship between these two countries is stronger than ever,” says the Ambassador of Korea to the Kingdom of Belgium, H.E. Yoon Soongu. A relationship with strong roots in the past, diversified at present, and without a doubt thriving even more in the years to come.

In this framework, both the Korean Cultural Center and the Korean Embassy to the Kingdom of Belgium are organising several activities to celebrate this important date across Belgium.

We spoke with Ambassador Yoon Soongu, an experienced diplomat, who presented his credentials to the King of Belgium in January of 2020.

2021 a challenging year due to the Covid-19 pandemic, but it is also a very important date for both Korea and Belgium since it symbolizes the 120th anniversary of the bilateral relationship between the two countries. Could you tell us more about it, and why it’s so important?

This year indeed marks 120 years of diplomatic ties between Korea and Belgium. Belgium is a very very important country for us. Belgium sent more than 3,000 troops to the Korean War. So this is one of the important pillars of our bilateral relationship with Belgium. We are grateful for the sacrifice and the commitment that Belgian veterans have made to defend unknown people of an unknown country. Since then we have managed to develop a very fruitful relationship with Belgium. Belgium also dispatched a mission during the Asian financial crisis so this is also an important milestone. Since the eruption of the coronavirus, we have provided testing kits to Belgium. At the same time, Belgium has also exported vaccines to Korea. These are typical examples of our bilateral cooperations. All in all, it is a very important relation for us. As old friends, we are determined to develop and advance these important relations.

The best way to get to know a country is through culture. Culture in its full dimension. You have a very active Korean Cultural Center here in town. This Cultural Center has been promoting a well known chef from Belgium. Chef Sang Hoon Degeimbre has a Korean origin. What is your impression on his work, and the fact that he is establishing this link between the two countries?

We are so proud of the role that he has played as a kind of Ambassador to introduce Korean cuisine to Belgian society. Korean has quite a lot of unique traditions in terms of cuisine. We have 5,000 years of history, and our geographical identity as a peninsula. We have four distinctive seasons. All this has an important impact on the quality of Korean cuisine. He’s a well known cook here. I think he has introduced good quality Korean cuisine to European citizens here. So we are indeed proud of the role he has played as an ambassador.

Another of your important tasks is to have a dialogue with the European Union. The time of your arrival was not easy due to the pandemic. There was no space for other topics. I know that for Korea the Green Deal is indeed a priority. Recently, US President Biden announced that he is re-joining the Paris Agreement. Could you tell us of what consists the green vision of Korea?

Thank you for that question. President Moon, our current president, pledged to achieve carbon neutrality by 2050. We are fully committed to achieve carbon neutrality in the world. Actually, the Korean government is pursuing its own Korean version of a Green Deal. It is characterized by two important pillars. One is green transition, and the second is energy transformation. This is in line with the European Green Deal. There is a lot of room to cooperate with each other. We have exchanged information with the European side. And we are constantly exploring avenues to enhance our cooperation with the European Union. For example, here in Europe, an important Korean conglomerate invested a lot to produce electric car batteries, so one key component of these transformations. And also green areas. There’s a lot of room to cooperate with the European side. So now the discussions are on going. Soon or later I hope they are going to bear some fruit, so that we are ready to have a good harvest through these cooperations with Europe.

How is Korea trying to keep its tourist and cultural attractions alive in the minds of Europeans?

It is quite sad that we’ve had to put some restrictions, in terms of who can visit Korea. This is obviously because of the eruption of the pandemic. Every country is now very cautious to invite foreign travelers. Here in Europe there were serious travel bans on non-essential travel. As the situation continues to improve in the future we will be ready to welcome foreign tourists. At this time, there are some difficulties. I have to admit that. But as you correctly pointed out, we have the active role that the Cultural Center of Korea here in Belgium has played to promote cultural exchange. For example we release a Korean film online. We are running a lot of online programs to introduce the real nature of Korean pop culture, Korean cuisine and Korean films to Europeans. This is one of the ways in which tourism can be sustained.

Everyone on the planet is hoping to be able to travel again. Many governments are planning to boost tourism and are getting prepared to welcome tourists again. What do you expect will happen in the near future?

Many Europeans are being vaccinated. The rate is quite high. Korea is no exception. In terms of the epidemiological situation, our situation is a bit better than the one here in Europe. The number of newly confirmed cases on a daily basis is between 500 and 600 cases. All in all the situation in Korea is much better. But still, we are cautious in terms of people moving from one place to the other because it is a quite contagious disease. The virus is quite dangerous. But as the speed of vaccinations pick up in the future, we hope that mutual visits could be possible. Before that, we need to be cautious. Many countries in the world, including the EU block, are talking about a green pass to make sure people can travel abroad. Sooner or later we will see that visitors will come but for the time being we need to take a careful approach.

We have many tourist attractions. These days the Korean pop culture is really appealing to people all over the world. Once European citizens have a chance to visit Korea, I’d recommend — if they are young — for them to enjoy urban life. I’d definitely recommend that they check out the Gangnam style. Gangnam district is quite popular. People will enjoy the urban life. We also have quite a few traditional attraction points. Many Buddhist temples. And also, as I told you, Korea is a peninsula. We have very beautiful coastal lines. Also many high mountains. People will be able to enjoy Asian traditions with a magnificent view from the top of a mountain.