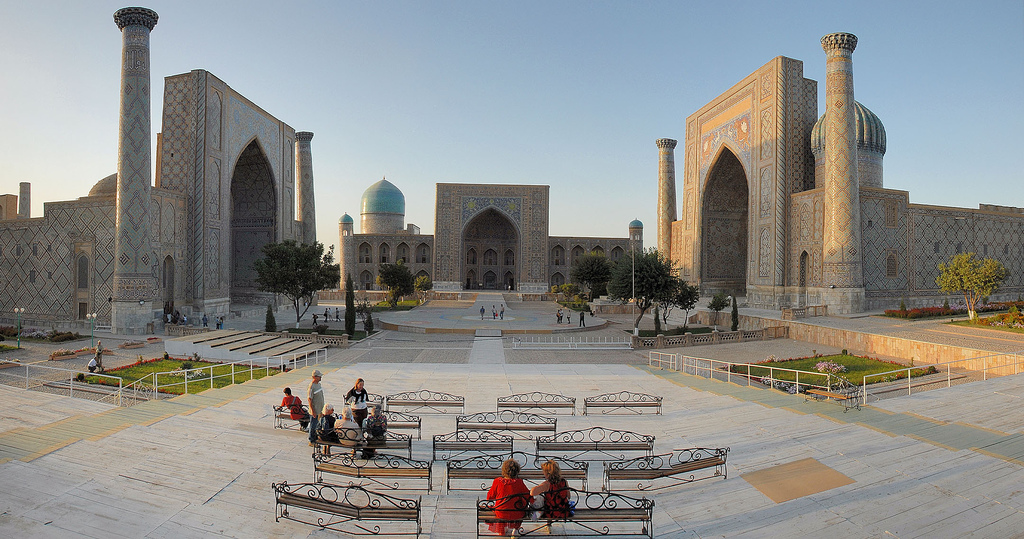 Discovering Central Asia through the eyes of Samarkand

Samarkand is one of the oldest cities in the world and arguably the most famous one of modern Uzbekistan. Located in the south-west of the country, this city, known successively as Afrasiab and Marchanda, was founded in 700 BC.

Its history is strongly linked with the Great Silk Road. Indeed, Samarkand became the main commercial hub of this network of roads stretched over 10,000 kilometres, from China to the Mediterranean.

To understand the history and the glory of this city, we need to plunge back in 1370 when Samarkand became the capital of the Timurid empire. The empire of Amir Timur and his successors surpassed the one from the famous Mongol warrior Genghis Khan, going from Turkey to the north of India, passing through Iraq and Iran.

Timur, a warrior, a devout Muslim and a legendary statesman, once summed up the spirit and dream of this city: “We can see the power of my empire through what I have built.” He contributed considerably to the development of Samarkand by boosting education and arts, and offering timeless architectural masterpieces to today’s Uzbekistan and Central Asia.

Samarkand has always attracted the attention of statesmen, merchants, and travellers. The city occupied an advantageous geographical position on the Great Silk Road. The transcontinental, commercial and largest roots in the history of mankind, linking Europe to Asia.

If you are a history passionate you will definitely enjoy discovering Samarkand.

Gur-Emir, in Uzbek, means “the tomb of the emir”, the tomb of the sovereign. Gur-Emir is the burial place of Amir Timur, his sons and grandsons. Originally, this mausoleum was created only for Timur’s grandson, Muhammed Sultan, who died young in 1403 during a military campaign. Timur  was overwhelmed by his death because he saw the young prince as his successor. At the heart of the mausoleum you will find Timur’s tomb, installed by another grandson, Ulugh Beg.

Registan Square is located at the heart of Samarkand. It appeared long before the Mongolian eruption as a center for commerce and trade. The word registan means ‘sandy place’. You will find at the Registan square the famous madrasas of Ulugh Beg (1417-1420), Tillya-Kari (1646-1660) and Cher-Dor (1619-1636). Madrasa is a Muslim school dedicated to the training of civil servants and scholars.

The Great Silk Road allowed the dissemination of ideas, values, cultures and knowledge. It contributed to boost cooperation between civilisations.

Ulugh Beg is one of the key stakeholders for the establishment of  a bridge between the Est and the West. If Amir Timur was known for his conquests and constructions, his grandson, Ulugh Beg, was recognized as a distinguished scholar. He built several Madrasas in order to, as he said once, educate the minds of Muslims. Passionate about astronomy, he built the work of his life in 1428: the largest observatory in the world!

Ulugh Beg succeeded in calculating the position of 1018 stars and writing a major masterpiece: the Catalogue of Stars that fascinated the scientific world throughout our history.

His scientific activity did not fail to provoke the anger of certain representatives of the Muslim clergy and other conservative forces who accused him of heresy and organized a conspiracy against him. Ulugh Beg was assassinated, perfidiously, in 1449, and his observatory was partially destroyed and abandoned.

Welcome to the Zohidov family! I had the opportunity to spend an entire day with this family and learn how to bake the Samarkand bread.

The Samarkand bread is famous for its exceptional taste:  Mr. Zohidov explained me that the real Samarkand bread should be good to eat for three years ! Mrs. Zohidov handles the kneading of bread dough, the shape and decoration with the precious help of her daughter-in-law. The daughter-in-law is wearing a typical dress embroidered with gold because she just got married. Mr. Zohidov is in charge of baking the bread thanks to his traditional oven. You will be amazed with his skills: he can place forty loaves of bread against the wall (impossible to explain, once again, check the video). The bakers in Uzbekistan are rather sportive!

Each neighborhood has its own bazaar but the most emblematic from Samarkand is definitely the Siab Bazaar, also known as Siabsky for the Russian speaking community. Here, we find the same spirit described in the Samarkand tales from the Great Silk Road: a true musical atmosphere, screaming merchants and multiple colorful products.

Besides the bread, there are several vegetables and fruits – namely the famous Uzbek watermelons and melons, as well as several spices (essential for a good plov).

The Uzbeks are a very hospitable people, always happy to feast visitors with their traditional dishes. The Uzbek cuisine is open to the influences of other cultures, while adapting the preparation of each dish. The plov is the main dish national dish. The plov from Samarkand is, in my opinion, the most tasty (don’t tell anyone).