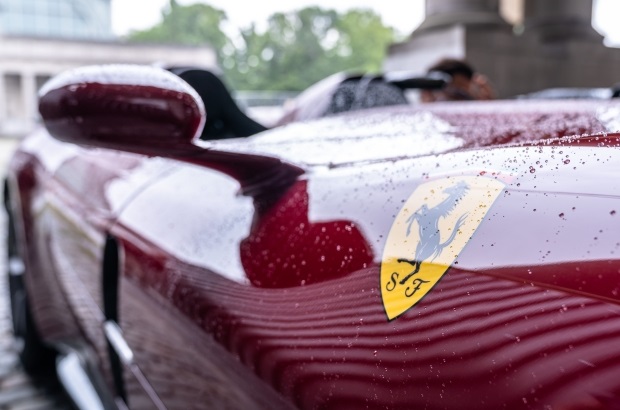 Calling all Ferrari fans – an expo devoted to one of the world’s best-known sports brands is set to open in Brussels… there couldn’t be a better time to pay homage to this mythical sports car as this year Ferrari is celebrating its 75th anniversary.

For just over two months Autoworld will be showcasing some fifteen exceptional Ferrari models. The Top 15 of the legendary brand. Each one boasts a distinct pedigree. They either depict a historical particularity, or were produced in limited numbers, or had been driven by a legendary driver, or belonged to a personality …  The public will thus be able to admire, among others, the Dino 206 (formerly Clapton), the unique Daytona Michelotti, the 195 Inter Ghia, the 500 Superfast (by Peter Sellers), the 250 GT Spider LWB, the 308GTS and many more.

On Sunday 25 September, a special Ferrari “Cars&Coffee” will be held on the Esplanade du Cinquantenaire in front of Autoworld.

In Belgium, we are marking a second anniversary. It was in fact 70 years ago that the driver Jacques Swaters became the official Ferrari importer for the Benelux, making our country the first Ferrari importing country in Europe and the 2nd in the world after the United States. It was in 1952, Swaters had just founded the Ecurie Francorchamps and imported his first Ferrari, the 500 F2.

A chronological summary: the exhibition follows the one dedicated to Alfa Romeo while in 1947 Enzo Ferrari’s aim was to build his first competition car – the Ferrari 125 S -, to outclass Alfa Romeo, from which he had just been dismissed as the race director.

The “75 anni di Ferrari” exhibition is organised in collaboration with Interclassics (Brussels Expo: 18th – 20th November 2022) which is also putting the “Scuderia” in the limelight by exhibiting an impressive range of the make’s cars.

It was in 1947, at Modena, in Italy that the story took off when the first 125 S left the works of the Via Abetone Inferiore. This sports’ model promptly won a race in Piacenza. It was to be the first of a long series. Very soon other sporting models see the light of day: the 159 S and the 166 S, Corsa, MM and Sport. The 166 MM Barchetta marks a turning point in the history of the marque, as it is the first road-going Ferrari.

Some of the most prestigious Italian coachbuilders and designers are called upon to create near-on unique models: Vignale, Ghia, Touring but especially Pininfarina whose collaboration, which came about in 1952 (with the creation of a cabriolet for the Scuderia Georges Filipinetti), continues to this day. The Ferrari 250 GT California Spyder (Pininfarina – Scaglietti) is reputed to be “one of the most beautiful of the Ferrari cars and one of the most gorgeous convertibles in the history of the automobile”.

The ‘60s are crucial years for the marque. In 1960, not only is the Ferrari 250 GTE the first Ferrari to be produced in series to 900 models, but more especially Ferrari becomes a public limited company (SEFAC). Taken on by Ford, the American giant gives him a hard time in races over more than five years. Notwithstanding its successes, Ferrari contends with financial difficulties. In 1969, Enzo Ferrari sells 50% of the PLC’s shares to Gianni Agnelli, CEO of the Fiat group. Some 1,395 models of the Ferrari Daytona models then roll off the line, but it does not enjoy the wished for success due to a rather unstable political environment.

Several months after the death of the “Commendatore” in August 1988, the Fiat group becomes the majority shareholder but, five years later, the company manages to sell no more than 2,289 cars and is given up for dead. In 2004, Agnelli appoints Luca di Montezemolo (a former assistant of Enzo Ferrari) to head up Ferrari. The latter swiftly increases the turnover. Even so the company’s policy is to remain closer to handcraft than to industrial production, in accordance with the “Formula Uomo” (“Human Formula”) placing the human well-being at the heart of the constructor’s considerations. Since the beginning of 2016, Ferrari is no longer a part of the Fiat group.

The story of the Prancing Horse remained controversial for a long time. One even suspected that Enzo Ferrari had invented it out of whole cloth to nourish his own legend, however documents indisputably prove that it concerns the cavalry regiment’s emblem of Francesco Baracca, a First Word War Italian fighter pilot ace, which was offered to Enzo Ferrari by Francesco Baracca’s mother.

The “Scudetto” became Ferrari’s emblem with the letters S F (for Scuderia Ferrari). Worth noting that an almost identical prancing horse is to be found in the Porsche logo: the latter refers to the former coat of arms (1286-1952) of the city of Stuttgart.