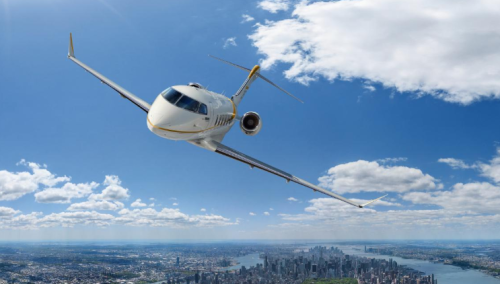 Canadian company Bombardier will increase its revenues to $6.5 billion during 2022, said the company’s president and CEO Éric Martel to Canadian media. In 2022, the company will deliver more than 120 aircraft to different locations around the world.

Martel noted that despite the pandemic and the current world conditions, Bombardier remains solid and strong to remain the world’s leading manufacturer of business jets that today employs 14,000 people worldwide.

He emphasized that today the Canadian company, which celebrates its 80th anniversary this year, is at its best moment. A year and a half ago it carried out an important internal restructuring, which has allowed it to sell many aircraft in the world and to accumulate a long list of orders until the end of the year 2023.

He pointed out that the sale of commercial aviation they made to Airbus and Mitsubishi in 2020, as well as the sale of the train division that occurred in early 2021, had positive results because it allowed them to focus on business aviation where they have remained as leaders. “After completing the divestiture of our train business to Alstom, we are now operating as a pure-play business aviation company, with two leading aircraft families,” he said in an interview with Strategy + Business.

He added that as part of the current strategy, the company is expanding its service center in London, and acquired another one in Berlin. The size of the service facility in Singapore has been quadrupled, while its service presence is being established in Australia.

“The results have been extremely positive, in fact the company is in the best position it has been in a long time because the specialization in these two large families of aircraft which are Global and Challenger, are leaders in their segments,” he said.

The first three months of the Covid-19 pandemic had a negative impact for the company. From the fourth month onward, the business aviation industry saw a fabulous boost for several reasons: commercial aviation had very little flight availability, and people migrated from commercial aviation to business aviation; also, people felt safer to travel on a business jet with their families or with colleagues than to go on a plane with 200 people they did not know.

Bombardier currently has 5,000 aircraft flying around the world and since the pandemic, those aircraft are flying many more hours than they did pre-pandemic, indicating their intensive use. This year, the company is allocating a budget of 250 million dollars in projects. For example, one of the most successful aircraft, the Challenger 3500, which is a redesign of the Challenger 350 aircraft, was presented in September and is already beginning to be sold.

Martel emphasized that today the company is more solid than ever to face the current times “and those to come”, since the restructuring that was previously carried out helped them to have less debt and strengthen the company.