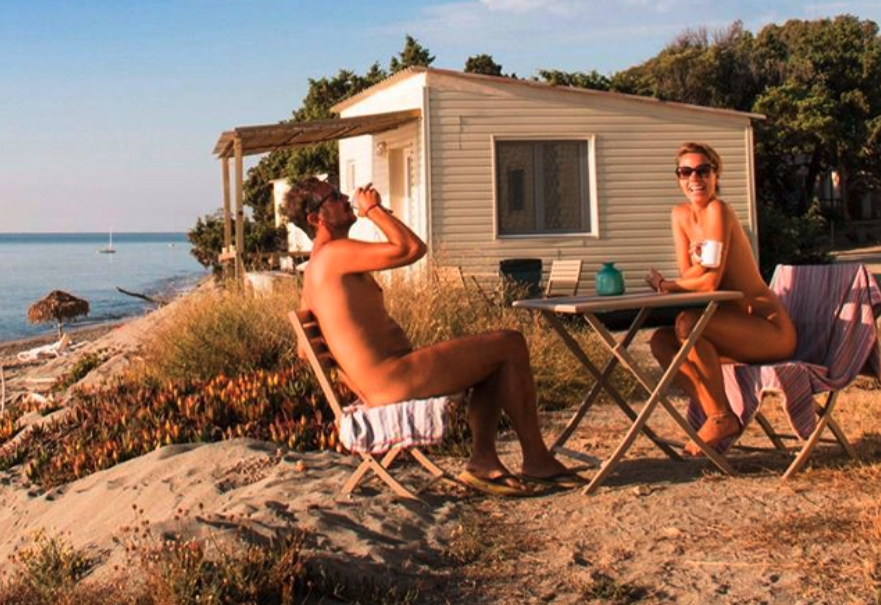 Visiting all of Europe in a couple of hours

Nick and Lins are a couple from Belgium around their early 30s. They spend most of their free time and money on traveling and discovering new cultures all around the world. But there is a point that distinguishes them from other travelers and wanderers: they travel completely naked “because life is better without clothes,” as their motto says.

Four years ago, they decided to create a website and social media accounts – they have profiles on Facebook, Twitter and Instagram – focused on naturism, nudism and nude recreation. All these terms have a very important thing in common: They refer to non-sexual nudity. Nick and Lins started sharing their adventures and experiences with their followers and readers, recommending some of the best places to get naked all around the globe.

Traveling full time in search for places to get naked, though exciting, isn’t exactly usual. But how did they come up with this idea and why?

Nick and Lins come from a small town in Belgium, where naturism didn’t really exist or was considered a sort of taboo. One day, they accidentally stumbled into social nudity and discovered this wonderful naked lifestyle. And they immediately fell in love with it!

“The more we engaged into naturism, the more information we tried to find about the subject,” they said. Firstly, they looked for information on the internet. But what they found was quite disappointing: boring texts, long rules’ lists and pictures of frontal nude people which seemed to have been taken in the early eighties. This was not the idea they had about naturism! Thus, they decided to share their own idea of naturism with the world, through the eyes of a 30-year-old couple. This is when NakedWanderings was born, back in 2016.

At the same time, they were focusing on another little project. They decided to start saving money to be able to go traveling for a long time in the future. Once they had gathered together enough money, they planned trips to naturist places around the globe. From amazing nude beaches, to awesome nudist resorts; this is where naked wanderings had taken them. Of course, the idea was to share their experiences on their web page.

“In a very short time, we gained an impressive amount of readers and our naked butts have appeared in newspapers and magazines all around the world,” declared the couple.

So far, they have visited naturist places in 4 different continents. “We have been naked in the mountains of Thailand, deep in the Canadian forests, in the desert of California and even in the Amazon Rainforest. And in so many other cool places.” They have also written a book in Dutch about all their experiences titled “Alles Uit!” (literal translation: “Everything Off”).

What should have been a travel gap year became their new life. Still today, they are finding new nudist places to be added to their Nakation Map, which is regularly updated on their website.

For anyone taking the first steps into nudism, Naked Wanderings is the right stepping stone. On the website readers can find all necessary information to get used to this wonderful lifestyle, such as the “Complete Guide for the First Time Nudist” or the Tips & Trick web page, which covers contents such as: