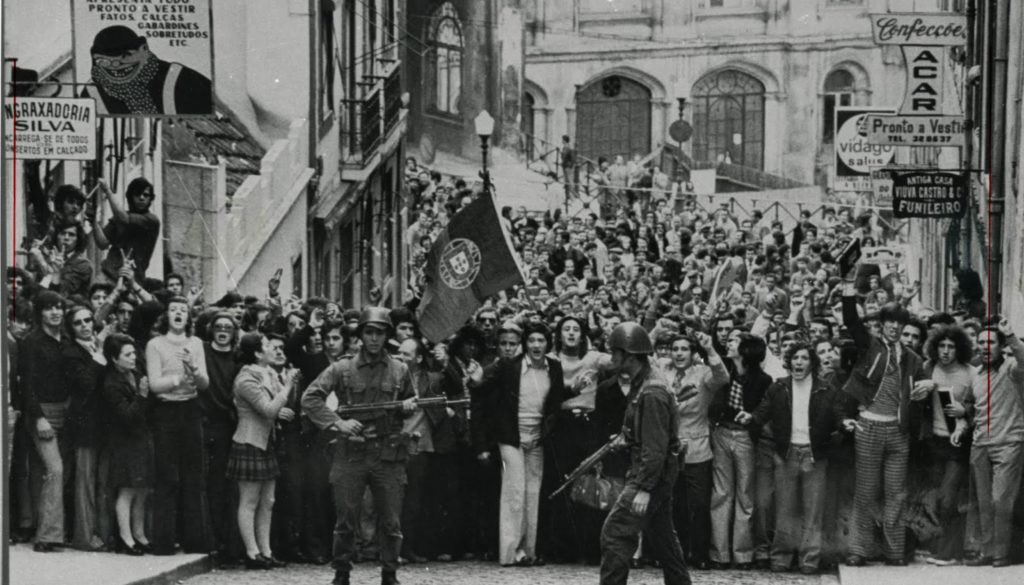 Finnair lifts use of face mask unless required by local authorities

April 25: A Revolution started with music and ornamented with carnations…

The carnation revolution that took place on April 25, 1974 impressed the world because violence was avoided. The Portuguese revolution influenced other revolutions in countries such as Spain, Venezuela or Brazil and had the power to end the dictatorship and give Portugal reasons to think about a future in which it could fly. Today the Portuguese live in freedom, thanks to the courage of a group of brave soldiers and captains. Come with me discover 10 facts and curiosities on the red carnations revolution …

1. Was April 25th the first date planned for the coup?

No. An attempted coup d’État takes place on March 16, 1974. On that day, a military column leaves the Caldas da Rainha regiment bound to Lisbon, accompanied by the Lamego, Mafra and Vendas Novas regiments. But a rebellion in Lamego made the rest unwilling to take any chances and the mission was aborted, while the military arrived in Santarém. After returning to Caldas da Rainha, the military were arrested.

2. How many years did the Estado Novo last?

Established in 1933, by António de Oliveira Salazar, the Estado Novo replaced the Military Dictatorship that had been going on since 1926. Salazar put an end to it when he was elected President of the Council. The policy was similar to the one which existed in Germany, Italy and Spain, with the difference being its association with the church, always on the side of the Government. Even after Marcelo Caetano assumed the position of President of the Council in 1968, the Estado Novo, although with less strength, continued. The regime fell 41 years later in 1974. Portugal lived 48 years of dictatorship.

3. How did the idea of ​​a military coup occur?

A few years before the revolution, Portugal started a colonial war and the Government showed no intention of bringing its troops back, whilst the military did not want to continue to go to Africa to fight a war they did not believe in. Then, the Armed Forces Movement was created, no more than a group of military clandestinely considering a way to end the dictatorship.

The military coup was not even the first option, but it ended up being the chosen one. It was intended that the Armed Forces Movement would advance over Lisbon and be able to surround the main points of the Government. Many movements did this in several cities, to form command posts across the country. In Lisbon, the Pontinha Regiment was prepared to start hostilities, with Otelo Saraiva de Carvalho in command accompanied by five officers. One of the main movements came from the Practical Cavalry School of Santarém, commanded by Salgueiro Maia, whose mission was to occupy Terreiro do Paço. However the movement was diverted to Largo do Carmo, where Marcelo Caetano and two other ministers were refugees.

4. Did you know that the revolution started with a flat tire?

This memory was reported to Efe Agency by Vasco Lourenço, president of the 25 of April Association created to keep alive the spirit of the movement that created the basis for the return to democracy in Portugal. He says that “they were returning from one of the first meetings and a tire was flat. It was two in the morning and while changing the tire, he told Otelo that they weren’t going to solve anything with bureaucracies, and they should do a coup and call elections. Otelo’s words remained in History: ‘But do you also think so? This is my dream!”

5. Did you know that there was a signal for the troops to leave on the 25th of April?

At 10:55 pm on the 24th, at associated emitters of Lisbon, the animator of the radio said: “It is five minutes to 23:00, with you, Paulo de Carvalho, with the Eurofestival song of 74, “Depois do Adeus.” This was the first signal given to the troops that everything was ready to go.
The second signal was transmitted by Rádio Renascença, between 12:00 am and 1:00 am, if everything was operational. At 12:25 am, the first verse of the song “Grândola Vila Morena” by Zeca Afonso was read. The music was broadcast, and then, the signal was given for the troops to advance to Lisbon.

6. Why are the carnations a symbol of the April revolution?

There are several stories, but there is one of which there are photographic records. The carnations were abundant because they were from that time of year… Celeste Caeiro, worked at Franjinhas, a restaurant in the center of Lisbon, which that day celebrated the anniversary of its inauguration, a party where flowers could not be missing. However, upon arriving at work, Celeste found the door closed and was informed by the boss that he would not open it because a revolution was underway. So, she took the carnations with her to Rossio, where the military tanks awaited further orders from Salgueiro Maia. A soldier asked Celeste for a cigarette but as she was not a smoker, she offered him the flower. The soldier accepted the carnation and placed it in the barrel of the shotgun, a symbolic gesture worth imitation by his comrades-in-arms who followed in his footsteps, leading Celeste to distribute all the carnations she carried with her.

On the morning of the 25th, the commander of the frigate Almirante Gago Coutinho, was ordered to open fire on the terrace of the palace, an order that was not carried out as there were many people there as well as several boats in the vicinity. Shots should still have been launched into the air, but as the frigate only had army ammunition, no one wanted to carry out the order, otherwise it would create chaos in the area. Although they refused to comply with a higher order, the lawsuit was eventually shelved.

8. Was April 25th a victimless revolution?

Although it was a profoundly peaceful coup, it is untrue that there were no fatalities during the revolution. It was at the end of the day when the people of Lisbon demanded the end of the political police (PIDE), resulting in their leaders shooting at the population. This attack resulted in four deaths, the only victims of this revolution, and several wounded.

9. When were the political prisoners released?

Although the Government surrendered on the 25th, it was a day later that military forces managed to occupy Forte de Caxias, one of the political prisons with the most detainees. Then, on the 27th of April, it was the turn of the Peniche Fort to be released. This was where the only escape from prison during the dictatorship in 1960 had occurred, led by several prisoners including the well-known politician Álvaro Cunhal. Tarrafal prison in Cape Verde, established in 1936 during a reorganization process of the Estado Novo prison system with the objective of imprisoning political and social prisoners, also known as the “death camp”, was only released on 30 April.

10. Was the CIA involved in the preparations for the revolution?

There is no evidence that the American agency was related to the revolution. However a book published in 2008, Carlucci vs. Kissinger – The USA and the Portuguese Revolution, by Bernardino Gomes and Tiago Moreira de Sá, showed that the Central Intelligence Agency (CIA) was attentive to the movements of the Portuguese military and the possibility of a revolution. In the same book it is also shown that the Americans knew of the imminence of the revolution, but were nevertheless caught by surprise, a revelation made by Frank Carlucci, the United States Ambassador in Portugal in 1975. Carlucci declared that any action would have been to help the victory of the democratic forces, which had come to power.