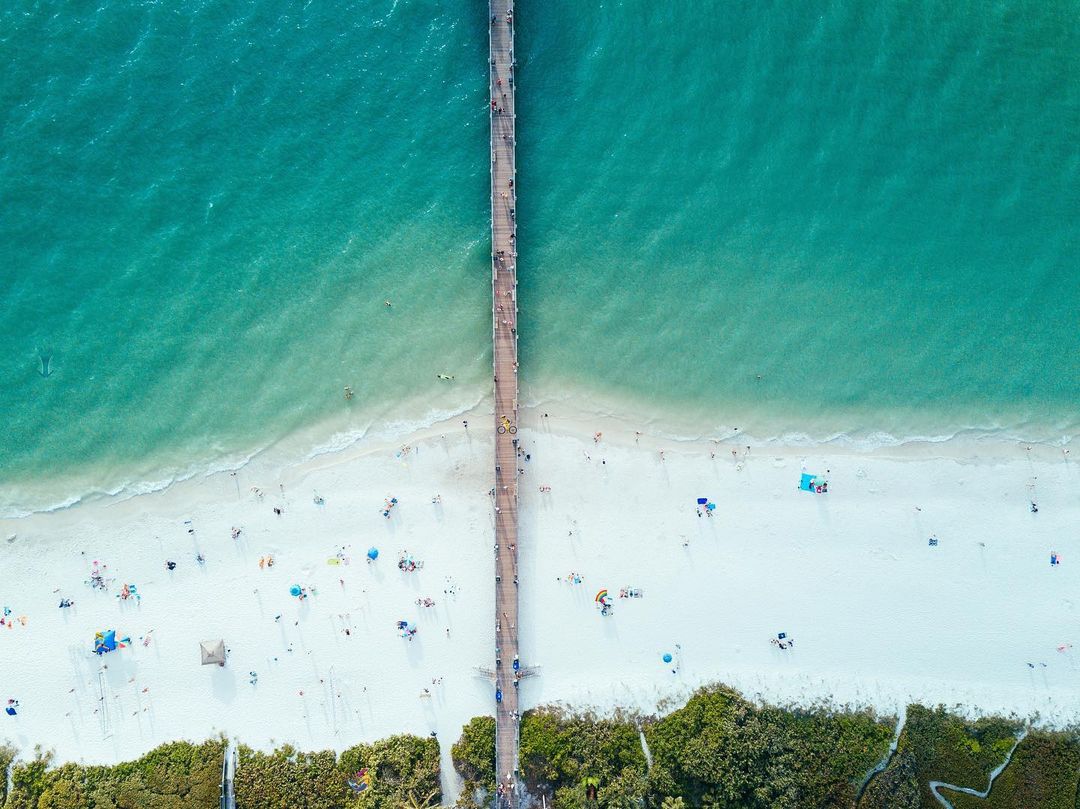 With more than 2,170 km of pristine shoreline, Florida is the second US State with the longest coast, only after Alaska. Unsurprisingly, the Sunshine State boasts some of the best beaches in the United States. Here we have a list of the top 10!

Clearwater Beach is situated on a thin island off Florida’s west coast, around 40 km away from the City of Tampa. This beach is known for its amazing coastline with white sand, calm waters, and gorgeous sunsets, but also for several activities such as scuba diving, paddleboarding, jet skiing, parasailing, deep-sea fishing and more. Lucky visitors might also be able to spot some sea turtles, rails, and dolphins. A popular spot near the beach is Pier 60, a 330-meter fishing pier and recreational park, which hosts six cover pavillons and a bait house. The beach belongs to the City of Clearwater, at which it is connected through a thin strip of land and two bridges. But the beauty of the beach itself – although of course the main attraction – is only one of the reasons why this place is so popular. Indeed, the City of Clearwater is also known for its diverse attractions, including theaters, parks, waterfront restaurants and the Clearwater Marine Aquarium.

If you’re looking for bright quartz-crystal sand and emerald water, Santa Rosa Beach is another heavenly place to be added to your bucket list. Stretching 40 km along Florida’s northwest coast, Santa Rosa Beach touches both the Choctawhatchee Bay to the north and the Gulf of Mexico to the south. Being way less crowded than the other popular beaches, Santa Rosa is the perfect place to enjoy a day off and relax while sunbathing, exploring sand dunes and more. Santa Rosa is also known for its fine dining options, breweries, local art galleries, and boutiques. The beach neighborhood bustles with plenty of activities, and it is also full of history. The area is home to the historic community of Point Washington which houses the Wesley Mansion, a structure built in the 1890s in what is now Eden Gardens State Park.

Honeymoon Island State Park is an untouched paradise for both beach lovers and bird watchers. It is a secluded State Park with stunning natural beauty and – as the name suggests – it is perfect for those seeking peace and privacy. Beach lovers will fall in love with its crystal blue waters and soft white powdered sand on a 6-km coastline, while nature lovers will enjoy an amazing 5-km trail populated by ospreys, bald eagles, and great horned owls. Popular activities include swimming, fishing, shelling, hiking, and bicycling.

Nestled right on the Gulf of Mexico, Naples beach is a popular destination with top-rated golf courses, culinary delights, and several luxury boutiques. But despite its luxury style, Naples is affordable and attracts beach aficionados, nature lovers, and luxury travelers alike. Its 16 km of white sand is the perfect place to relax away from the hustle and bustle of Miami, which is only a couple of hours away. Naples Pier is the perfect place to watch the colorful sunset over the Gulf immersed in a unique wildlife paradise. Some popular activities include fishing, kayaking, and snorkeling.

Henderson Beach State Park is a small beach located on the Emerald Coast, in the former sleepy fishing village of Destin, right on Florida’s Panhandle. It is well known for its tall snow-white sand dunes and warm waters. The beach boasts a nature trail and a campground with 60 campsites connected to the beach via boardwalk. Henderson Beach State Park was established with the aim of preserving and protecting the natural features of the area. In the past few years, the area has grown considerably and Destin has become a top beach destination, as well as a nightlife destination. The main activities include renting bikes, bird watching, and packing picnics. The park is also a popular place for private events, such as weddings and family reunions.

Fort DeSoto State Park consists of five islands that stand out for their white-sand beaches and the abundance of natural beauty and ecological areas, including mangrove swamps. Its diverse wildlife and habitats make it a nature lovers’s favorite. The State Park is home of more than 320 different species of birds, and, during the spring and summer season, it also becomes a nesting ground for loggerhead turtles. Thanks to its ecological significance, the area has been preserved as a county park. Today, though the wildlife is meticulously preserved, the beach offers amenities, such as picnic tables and shelters, playgrounds, lifeguards, and restrooms.

On the way to Key West, Bahia Honda State Park is a tropical destination located at mile marker 37 in the Florida Keys. The park actually has two beach areas, each one facing opposite directions. The beach boasts not only the typical Floridian landscape (lined palm trees and clear waters), but also several species of wading birds and shorebirds, snorkeling spots, and a historic railroad bridge. The park is also well-known for its shallow waters and sea breezes that delight visitors all year round.

Bowman’s Beach is one of the several beaches of Sanibel Island, a popular destination for families, couples and nature lovers. Located near Fort Myers on the west coast of Florida, Sanibel Island is a 20×5 km area, renowned for the presence of millions of seashells on its shores. For this reason, from January through March, Sanibel Island attracts thousands of shellers willing to add to their collection some souvenirs from Florida’s beaches. Bowman’s Beach is a secluded escape with several amenities, including BBQ grills, picnic areas, playgrounds, showers, and restrooms. Sanibel Island can be reached through a 5 km causeway paying a small toll.

Fort Zachary Taylor State Park is a place with plenty of history, situated on the southern edge of Key West, right where the Atlantic meets the Gulf of Mexico. Its beach is located at the southern end of the park and boasts nature trails and clear waters, ideal for swimming, snorkeling, paddling and fishing. Besides the beautiful beaches, the State Park is also a historic area. Fort Taylor is a National Historic Monument predating the Civil War. Known for its red-brick corridors, the fort is home of the largest cache of Civil War armaments in the world. On the third weekend of each month, local re-enactors perform historic demonstrations.

This Heaven on Earth is located on the West coast of Florida, off the coast of Clearwater. Caladesi Island State Park is one of the few untouched islands along the Gulf Coast, and is accessible only by boat. It boasts several natural landscapes with mangrove forests and majestic trees, including cabbage palms, pine trees and live oaks. It is a popular spot for boat cruise, paddling, kayaking or simply relaxing on the white sand.