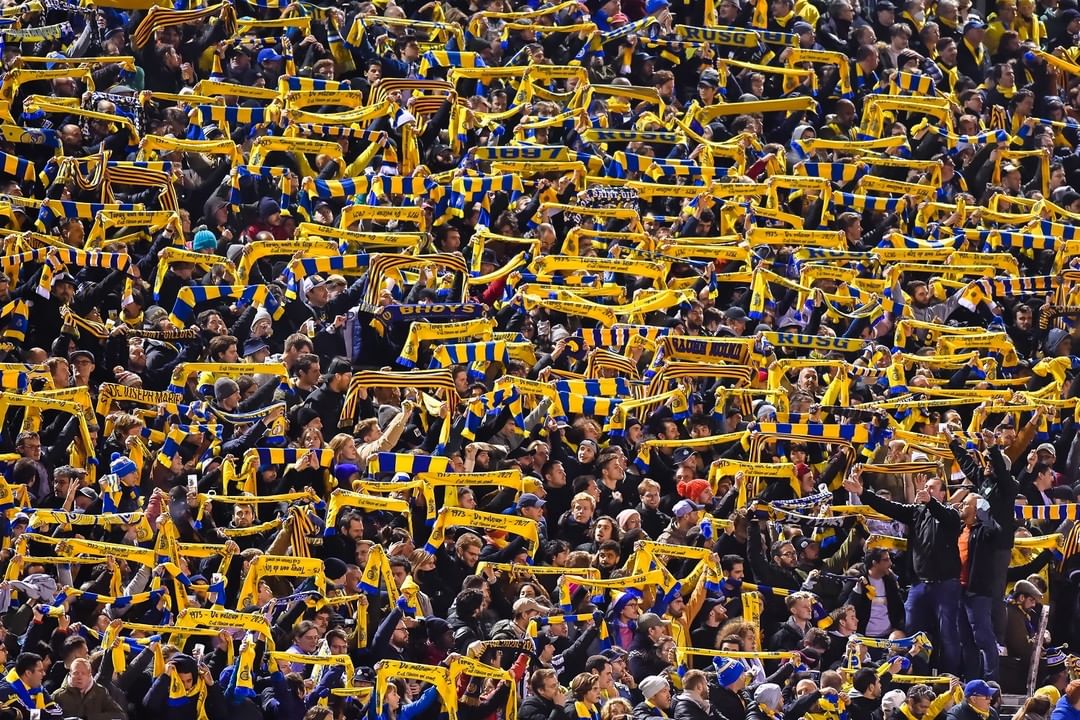 At the end of last season, Royale Union Saint-Gilloise, one of the most historic clubs in the country, located in one of Brussels’ 19 communes, was promoted to the top tier of Belgian football. Amazingly, it now stands proudly aloft the top of the Belgian Pro League, looking down on the likes of its near neighbour, Anderlecht,Club Brugge and Standard Liege.

To get a handle on such how staggering this is it is best, perhaps, to draw a comparison with a similar size district in, say, London. Imagine Kensington, whose 60,000 population is similar to that of Saint Gilloise, heading the Premier League in England.

No, it is unimaginable, of course. But a not-dissimilar feat has been achieved by USG, which is actually now on course for an even more outlandish goal: winning the league and representing Belgium in next season’s Champions League against the likes of Barcelona, PSG and Bayern Munich.

The USG fans who flocked to their most recent success, a 4-0 home hammering of Charleroi, could be forgiven for pinching themselves that they are not dreaming. A notable attendee was Belgian coach Roberto Martinez, said to be casting an eye on the club’s as yet-unheralded talent.

A particularly impressive showing, the game was effectively won by half time against a club from the 5th biggest city in Belgium. As this article went to press, this, a remarkable tenth victory in 14 league games so far this season, put USG on 31 points, no less than five ahead of Club Brugge in 2nd.

For the USG manager, Felice Mazzu, the easy victory was probably all the sweeter as it came against his home town team. For the club’s older fans – actually, they will be rather old now – will have vague recollections when the club did actually dominate the Belgian football scene.

However, that was back in the 1930s when USG, one of the founding members of the league here, were serial winners of the top division. Black and white photographs on the walls adorning the maze of corridors below the main stand at the club’s remarkably picturesque and atmospheric ground pay testimony to those long-forgotten glory days. A display cabinet contains very old trophies that the club use to win regularly when it was Championne de Belgique.

Other photos show the ground under construction back in 1926 and another framed photo of the team line-up,  then playing in white compared with the yellow and blue of today,  before a game in the 1967-68 season.

Behind the players are, possibly, the same row of trees located in Parc Duden, which the USG ground squeezes into, and some very sparsely populated terraces.

Fast forward to 6 November 2021 and the home game against Charleroi. Yes, those same trees are still very much evident – it is believed that as they are “protected” the club cannot cut them down – but the terraces are now packed with expectant supporters who have returned to back their local heroes in big numbers. For many expats, newly arrived in Brussels, USG has become the local club to adopt but, until its amazing surge to the top, Union still remained something of a relatively sad relic of its former glory days.

That was until a Brit arrived on the scene to help breath new life into this ageing “giant” of the Belgian game. Tony Bloom, also chairman of English Premier league side Brighton, – themselves enjoying a good start to the new season – took over USG in 2018, and they have not looked back since.

Bloom himself is a highly colourful character: professional sports bettor, poker player, entrepreneur and owner/chairman of football clubs. He made his fortune in the betting industry and now has his sights set on hitting the jackpot with a club previously little known outside of Belgium. The club is, in fact, one of the most successful in the history of Belgian football, having won 11 championships between 1904 and 1935, making it the most successful Belgian club before WW2.

On 13 March 2021, after defeating local rivals R.W.D Molenbeek – another historic club in Belgium – USG was promoted back to the First Division, marking its first appearance in top-flight football in 48 years. The scenes and sounds outside the ground before the Charleroi game at the weekend must have been music to the ears of people like Bloom and its loyal – and very loud – band of supporters.

In fact, you’d have to go a long way to find a better match day atmosphere than the Stade Joseph Marien, ironically actually located in the commune of Forest.  The distance to its more exalted football rival, Anderlecht, is less than 7km but, currently, the gap in football terms is much bigger.

Saint Gilles’ most famous inhabitants include Victor Horta and Paul-Henri Spaak, a founding father of the EU. The only venue that has attracted people in these parts for many years is at Forest National which stages concerts.

But be warned: the club’s rise to the top and its fine footballers like USG’s English import, former Portsmouth “legend” Christian Burgess (who rejected a new contract at Pompey to join USG), could soon be rivalling all that.