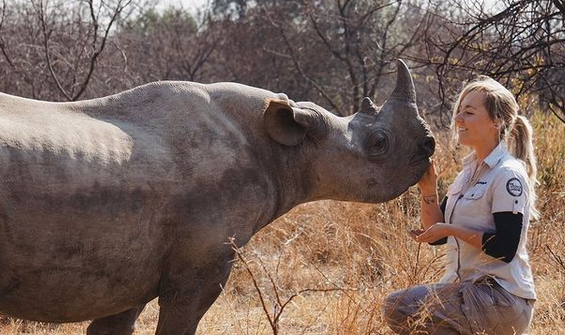 Although rhinos might seem intimidating because of their large size, they can become the most loving animals. That’s what happened with little Kabelo, an orphaned rhino who arrived at The Rhino Orphanage reserve in South Africa. Kabelo has created an endearing bond with his caretaker, Laura Ellison (25), who on her Instagram account has shared the evolution of this incredible relationship.

Originally from Australia, Laura spent the last three years living in South Africa as a veterinary nurse at The Rhino Orphanage. Her passion for rhinos started at the Taronga Western Plains Zoo, where she worked as a keeper. Later she decided to take on a six-month stint in South Africa at the Rhino Orphanage. Within two months, she was offered a job and she realized she had found her calling.

Laura and Kabelo’s closeness is so remarkable that the young rhino has no problem cuddling up to her while he falls asleep. Of course, these expressions of affection have been changing as the rhino grows, but his affection is such that he tries to show it in different ways regardless of his size.

Kabelo has an incredible capacity for love and forgiveness. Humans killed his mom and for him to trust me the way he does is incredibly bittersweet. Rhinos deserve a life with their mom without humans interfering. Please help me fight to protect them

In October, when Kabelo was still a baby, he could sleep on top of Laura without any problem; now that months have passed, he has to settle for cuddling her affectionately, resting his horn on his caregiver’s shoulder.

The young veterinarian explains through her Instagram account, that upon the arrival of the baby rhinos at the orphanage, they sometimes have to sleep with them because of their high stress levels.

This is because rhino calves maintain a very close bond with their mothers and are not used to being alone, so they seek someone’s company. In Kabelo’s case, it was necessary for Laura to sleep with him for five nights and she says that in all of them, he was very careful not to crush or hurt her, even licking her face and feet as a sign of affection.