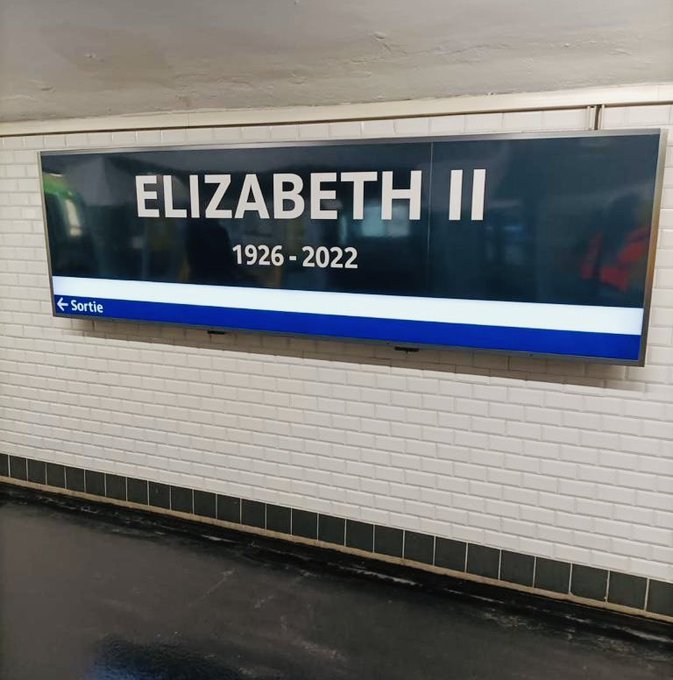 A Paris metro station was renamed Elizabeth II for a day as a tribute to the British queen during her funeral. Located on the Champs Elysees, the George V station, named after the late Elizabeth II’s grandfather, was replaced by a plaque commemorating the UK’s longest-reigning monarch.

“The RATP group is paying tribute to the Queen of England by renaming the George V station to Elizabeth II for the day,” it said in a statement on Twitter Monday. Passersby could also see a picture of a plaque with the Queen’s name and the years of her birth and death.

The tribute comes on the day of the Queen’s funeral, which French President Emmanuel Macron attended. According to CNN, the French presidential palace paid tribute to the Elizabeth II shortly after her death, thanking her for the role she played in modern history and the relationship between the two countries. “She held a special status in France and a special place in the hearts of the French people,” the Élysée Palace said in a statement.

According to the statement, Queen Elizabeth II held the record for most visits to the Élysée Palace for a foreign sovereign. The Queen met with all eight presidents of the French Fifth Republic, which was established in 1959.

“We wanted to add to the day of mourning by putting the plaque ‘Elizabeth II 1926-2022’ at George V station on line 1,” a spokeswoman for operator RATP told AFP news agency. The station regained its official name on Tuesday September 20th.

The subway stop is named after George V, who reigned from 1910 to 1936. His sons succeeded him under the names Edward VIII and George VI (the father of the future Elizabeth II).

In France, authorities ordered flags to fly at half-mast on public buildings this Monday on the occasion of the state funeral of the Queen of the United Kingdom.