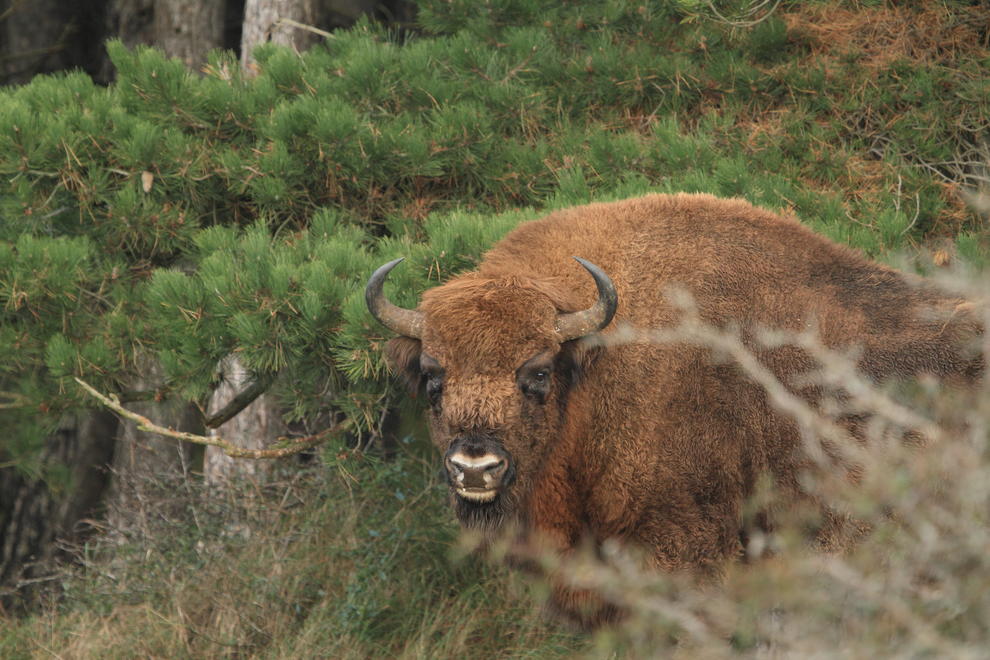 This hydrogen-powered e-bike is the first of its kind

The People’s Postcode Lottery is investing £1,575,000 in a project called Wilder Blean, which aims to reintroduce bison in the United Kingdom, a territory once roaming with the “woolly bulldozers”. There are two main reasons behind the scheme. The first is to expand and try to diversify the population of the wild European bison, which almost became extinct last century. Second, to help restore the native natural habitat.

The bison is considered a keystone species, one that, through its activities, influences the entire habitat and ecosystem around it and is of the outmost importance for their survival. By simply living their lives, grazing, foraging, trampling, wallowing, defecating, bison naturally maintain woodland.

They might ring-bark a tree so it dies off, creating lovely standing dead wood. Insects will bore into that and you’ll have stag beetles, woodpeckers, bats, mosses, lichens and fungus.

Just by walking, their size allows them to create corridors through dense vegetation. They also knock non-native trees down or simply kill them by gnawing their bark. The dead trunks then transform into habitats for different animals and plants. Furthermore, when they dust-bathe to remove parasites from their fur, they create patches of uncovered earth, which are ideal for pioneer plants. They also carry seeds in their fur and faeces and disperse them throughout their territory.

They’re going to be managing the woodland for us. And they’re doing it for free!

In an article for DiscoverWildlife, Richard Fleury talks about the project and meeting Britain’s first bison rangers, Tom Gibbs, a former conservation officer for Herts and Middlesex Wildlife Trust, and Donovan Wright, who previously worked as a safari ranger in southern Africa. The project is a collaboration between Wildwood Trust and the Kent Wildlife Trust and will be conducted from the Wildwood wildlife park, 8km outside Canterbury.

The park is on the outskirts of the Blean Woods, also known simply as “the Blean”, one of south-east England’s largest areas of ancient woodland. Like many other ancient forests in England, the Blean was turned into a commercial timber production site during the World Wars, native trees being replaced by conifers. Now, the tall, light blocking gymnosperms do not allow for the return of native species like holly, oak and birch.

You can hear vehicles, but not a single bird. That’s not normal for a woodland.

Tom and Donovan hope the reintroduction of bison will help restore the woods to what they once were. Besides flora, the fauna of the Blean should also see improvements once the “woolly bulldozers” are back in the wild. Tom explains that bird numbers increased annually in the Kraansvlak nature reserve in the Netherlands after bison were introduced in 2007 and researchers found that they were using the mammal’s fur to line their nests.

At the moment, the park is only licensed to bring 10 bison, but could be allowed more in the future. The first family however will only consist of 4 individuals: an older matriarch female, brought from the Highland Wildlife Park in Scotland, 2 younger females, from the Fota Wildlife Park in Ireland, and one bull coming from Germany. It is the rangers’ hope the first residents will soon mate and increase the size of the herd.

We hope to see calves within a couple of years.

The animals will be monitored with GPS collars, but since these can be damaged, the Tom and Donovan will also use traditional tracking skills, like following prints, fur, faeces and broken twigs, to make sure they can keep a close eye on the animals’ development.

The herd will have 210ha of woodland available to roam freely, with as little human intervention as possible. Tom says that although the bison will not be completely wild, like their cousins in the Carpathian Mountains, “we will do everything we can to make it as wild as possible. It’s about taking a step back to allow the animals to exhibit natural behaviours”. The rangers will only intervene if they notice the condition of the specimens worsening and they become worried about their well-being.

If this first population successfully adapts and shows a strong gene pool, it is possible for other places in the country to follow the example and even use the calves of this family to create their own herds.