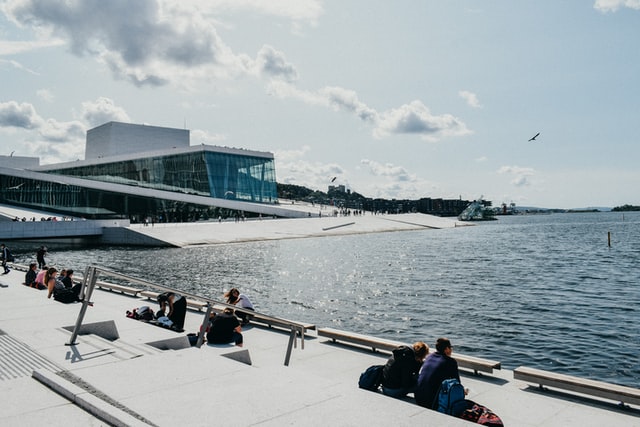 4 new cultural activities you must experience while in Oslo

The waters of the fjord lie still, an expansive cobalt sky being mirrored on its surface. The sunlight washes over the buildings, the squares, the parks, it is everywhere. On the peer a group of seagulls lift their beaks and squawk while young parents push prams and sip their coffees. This is Oslo at its best in the summer. Norway has invested in the infrastructure of its capital, as well as in its cultural institutions so several museums and attractions have opened its doors to visitors.

All travel restrictions, testing requirements and the obligation to register prior to arriving in Norway were removed on the 12th of February 2022. If you are considering where to spend your next summer holiday, here are four reasons why Oslo ought to be at the top of your list.

Inaugurated on June 11th, the new National Museum in Oslo is the largest art museum in the Nordic countries. The museum is centrally located on Oslo’s Rådhusplassen (city hall square), making it a perfect place to stop by for an unforgettable cultural experience. The new National Museum is part of a major project to develop Oslo, opening up the city where it meets the fjord.

The new museum is meant to be a place for new ideas, inspiration and compelling cultural experiences. In the new collection exhibition, older and modern art, architecture, design, arts and crafts, and contemporary art will be presented under one roof and in new settings.

With its new, large exhibition areas, the National Museum can now showcase more of its collection than ever before, as well as presenting a rich program of temporary exhibitions with Norwegian and international artists.

6,500 works that will be shown in the new collection exhibition. This means that the museum will be able to display twice as many works from the art, architecture and design collections as we could in the past. The Light Hall is the building’s signature architectural feature. With its 2 400 square meters it will be a spectacular exhibition venue never seen before in Norway.

Among the works that guests will find at the museum are Dutch and Flemish landscape paintings and still lifes from the 17th century, Johan Christian Dahl’s magnificent landscape paintings from the first half of the 19th century, the Munch room with the iconic «The Scream», and the museum’s highlights of Norwegian and international contemporary art.

The new Munch Museum opened its doors on October 22nd, 2021. At five times the size of the original building, the new Munch allows visitors to experience the full range of Edvard Munch’s work across 11 floors. The museum boasts the world’s largest collection of Edvard Munch’s oeuvre, and the new structure increases the exhibition areas fourfold with 26,313 square meters of new spaces to showcase highlights from the artist’s prolific career. Standing at over 57.4 meters, this new landmark places Edvard Munch, Norway’s most important artist, firmly at the centrt of the city of Oslo.

Located on the edge of the Fjord, estudio Herreros created the new museum with the city of Oslo in mind. This new museum on the waterfront transforms the city’s skyline. The top floor opens up into an observation area, offering some of Oslo’s most spectacular views. The perforated, translucent aluminum façade reflects the changing colors and conditions of the Oslo skies. The new building has been created as a nod to Edvard Munch’s connection to the Norwegian landscape and his penchant for painting outside in all seasons.

Running until the 28th of August, Norwegian black metal band Satyricon has created a musical composition specifically to be experienced alongside selected paintings and graphics by Edvard Munch. Not only does this continue to present Munch’s extraordinary work in a new light, but the result is also a monumental yet intimate experience.

The intersection of Munch’s expressionist images and Satyricon’s bassline-heavy music creates a space for contemplation that goes way beyond the traditional form of black metal. Like Munch, Satyricon’s approach is open, inquisitive and constantly evolving. The music is stamped with Satyricon’s unmistakable signature, but the piece’s style, duration and expressiveness display a new angle on their previous work.

The artworks selected for this exhibition draw on existential themes, and are carefully curated in order to create rhythms and waves that work in tandem with the music.

Formed in 1991, Norwegian band Satyricon have become one of the world’s best known black metal bands. Throughout their careers, band members have worked across genres and collaborated with popular artists and ensembles such as Anja Garbarek, the Trondheim Soloists and the Opera Choir at the Norwegian Opera and Ballet.

In the fall, the museum will gather the full range of present-day modern art under one roof. With over 30 living artists – both well-known names and newcomers – from Norway and abroad, our visitors can look forward to an autumn full of great experiences at Munch. The program spans everything from installations, video, painting, sculpture and a mass of concerts and live music. Munch is the place to be to experience today’s most important living artists.

With its opening scheduled for September of this year, Sommerro is a luxurious hotel in the Art Deco style. This iconic and historic building in the Frogner neighborhood was originally the headquarters of the capital’s electrical company, Oslo Lysverker. Original elements of the decoration have been restored and preserved, giving the building some of its original character. One of Sommerro’s main highlights is the original artwork by celebrated Norwegian artist Per Krohg.

The hotel will also serve as a true community space built with social interactions in mind. The 231-room property – which counts 56 residences – will offer four restaurants, three bars, meeting and event spaces with capacity for up to 150 people, a 100-seat gilded theatre, a sprawling 8,000-square-foot underground wellness space, and the city’s first year-round rooftop pool, sauna, and terrace.

Oslo’s new main library is located in Bjørvika near the city’s iconic Opera House. It is a modern and dynamic library that contains not only Deichman’s extensive book collections, but also a movie theatre, media workshops, gaming zones, lounges and a restaurant, among other things.

The library’s architecture is closely tied to its role as a public space. The top of the building cantilevers out to announce its presence to the visitors that arrive from Oslo’s city center and the central station. Cuts in the facade mark the entrances the east, west and south, welcoming people from all sides of the city.

Diagonal light shafts cut through the building and connect indoor spaces with the streets outside and the nearby Opera House. After dark, the building glows and change looks as a reflection of all the different activities and events that take place inside.

The Future Library is housed there too, which holds manuscripts submitted by well-known authors that will remain here unread for 100 years. Authors include Han Kang, Karl Ove Knausgård, Ocean Vuong, and Tsitsi Dangarembga.