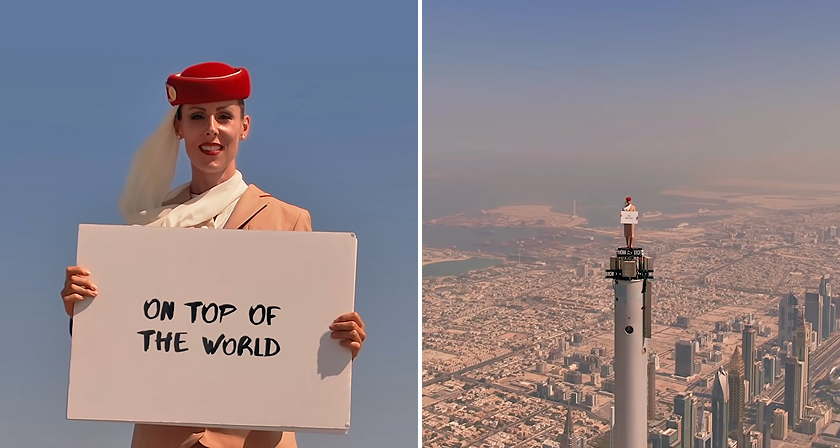 How Airbnb is defeating Covid-19

To celebrate the resumption of quarantine-free travel between Britain and the United Arab Emirates, Emirates airlines released a commercial shot at 830 meters above sea level at the top of the world’s tallest building, the Burj Khalifa.

The clip was filmed without green screen or special effects, using a drone to capture, in one continuous shot, the sequence of the 33-second video in which parachutist Nicole Smith-Ludvik, appears dressed as a flight attendant. She welcomes passengers by showing several cards with messages celebrating the opening of flights, including the phrase “See you in Dubai”.

We are always looking to defy the norm and push the limits at Emirates. We do it every day through our innovative services, our best product and of course, through our advertising

Although Emirates held a casting call for crew members, the professional Smith-Ludvik was chosen to ensure the highest levels of safety. According to travel website Sam Chui, the area where the protagonist stood had a circumference of 1.2 meters. The team began its ascent before dawn, and it took them an hour and 15 minutes to climb from the 160th floor of the Burj Khalifa.

Smith-Ludvik wore a safety harness under her Emirates uniform, which was attached to a custom platform and was attached directly to the pinnacle. For the shots, a single drone was used to film the entire sequence. The filming itself lasted about 5 hours.

We are proud to be among the privileged few who have been allowed to film atop the Burj Khalifa and even more proud to be able to showcase our beautiful city, Dubai

The Emirates city had been included on the UK’s travel red list, forcing fully vaccinated travelers from the Middle Eastern nation to a 10-day quarantine in hotels after arrival in the country. According to the airline, the ad will be tailored to various markets across its network, incorporating messages relevant to different audiences.