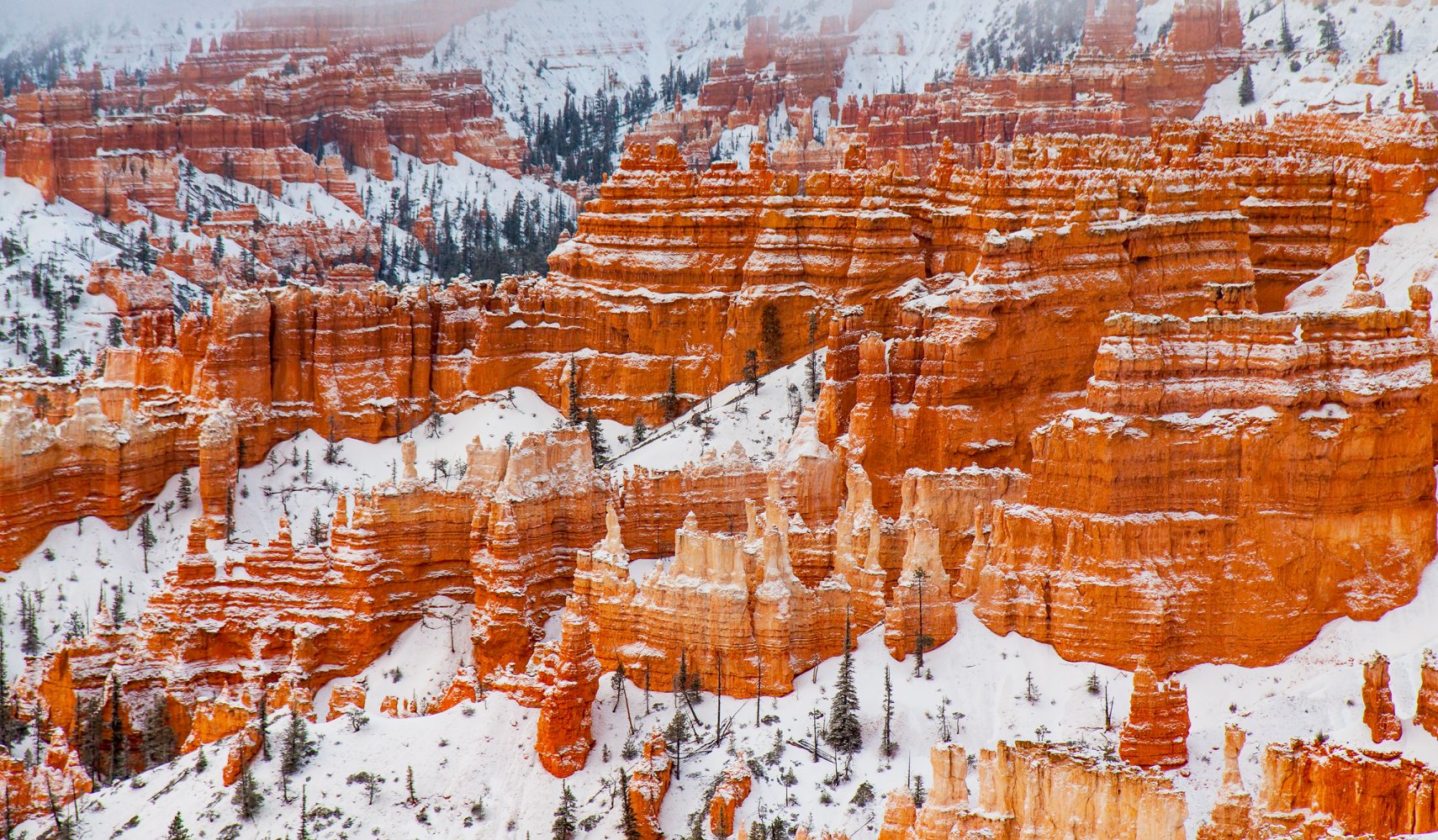 3 US National Parks to visit in winter

Just married? These are the best islands to celebrate your honeymoon

Each summer, US National Parks attract millions of visitors in search of the unique combination of nature and warm temperatures. But these warm-season travelers are missing the opportunity to experience the same scenery with smaller crowds and stunning snow-covered landscapes. So we have included here 3 fabulous US National Parks to visit in winter.

Situated along a high plateau at the top of the Grand Staircase, Bryce Canyon National Park boasts the world’s largest concentration of hoodoos formations (irregular columns of rock), as well as fantastic dark skies, endless vistas, and pink cliffs. Bryce Canyon was designated as a national park thanks to the uniqueness of the rock formations. Hoodoos are formed when ice and rainwater erode away the soft limestone that makes up the Claron Formation. The park transcends 650 m of elevation and includes three different climatic zones: spruce/fir forest, ponderosa pine forest, and pinyon/juniper forest. The presence of different habitats provides high biodiversity, including more than 100 species of birds and more than a thousand plant species.

Bryce Canyon has a long geologic history of sedimentation and erosion. The colorful layers of rock expose fossils that reveal clues about wildlife and flowers in the area up to 130 million years ago. Although you will have to face quite chilly weather, Bryce Canyon National Park in winter is absolutely stunning! At 2,400 m, the scenery changes dramatically during the colder months, providing unique views of snow-capped hoodoos and offering outdoor enthusiasts a fun opportunity: cross-country skiing. Besides daily activities such as snowshoeing, cross-country skiing, and winter hiking, there are also two big events that you cannot miss if you visit Bryce Canyon in winter: the Christmas Bird Count and the Winter Festival. The Christmas Bird Count is a tradition that started on Christmas Day of 1900. Today, it represents a valuable tool to monitor winter bird populations in North America. As the holiday season approaches, volunteers and bird enthusiasts will walk across several routes to explore and count the diverse bird species of the national park. Administered by the National Audubon Society, this event is the longest running Citizen Science survey in the world. The Bryce Canyon Winter Festival includes activities such as cross country ski tours, kayaking demos, snow boot races, pottery making and much more. This year, the festival will be organized on February 19, 20, and 21, 2022.

Home to North America’s tallest peak (6,190 m), Denali National Park offers spectacular landscapes all year round that enchant climbers, skiers, dog mushers, and athletes. The Denali National Park was created by congress in 1917 with the purpose of protecting Dall sheep from over-hunting. Throughout the years, the  park’s size grew, and the purpose changed. Today, the park is around 6 million acres, but very little human development is allowed in the area. The only trails in the park are located near the park road and the park entrance. However, visitors are allowed to hike off trail in a wild landscape. Denali includes only one road entrance, and one single 148 km-long scenic road that runs from east to west. Glaciers cover one million acres of Denali National Park, or one-sixth of the total area. Although snow may begin in August, in Denali National Park winter sets in by October. By the time the winter solstice arrives, the park receives less than five hours of daylight, but it’s at night that – if you’re lucky enough – you might have the chance to get a glimpse of the breathtaking aurora borealis. Additionally, each February there is a week-long event named Winterfest, which features a variety of activities for all ages, including snow sculptures, ice carvings, concerts, and campfires. In 2021, the festival was organized only online because of the Covid-19 pandemic, but the 2022 edition will hopefully be back!

Located in Northern California, Lassen Volcanic National Park is an area of about 106,000 acres filled with natural wonders, from volcanic summits to crystalline lakes to waterfalls. The park is also home to all four types of volcanoes (shield, composite, cinder cone, and plug dome), a feature that makes it a must-visit place in California. Because of its location, Lassen Volcanic National Park is one of California’s most underutilized parks, as well as one of the most stunning. After dark, the park becomes a spectacular spot to see the night sky. Sometimes park rangers organize astronomy programs during the summer, which include night constellation tours and presentations. But it’s in winter that Lassen Volcanic National Park becomes even more beautiful. Here, winter goes from October to June. During these cold months, the landscape becomes a winter wonderland as lakes become icy and volcanoes become topped with snow. Although a portion of Lassen becomes inaccessible due to heavy snows, visitors can still reach some areas that are ideal for winter sports. The park offers a plethora of winter activities, including sledding hills with mountain views, snowshoeing for any level, and cross-country skiing. An unforgettable cross-country ski outing is the marked trail around Manzanita Lake, from where you’ll get the park’s definitive view of the Lassen Peak!