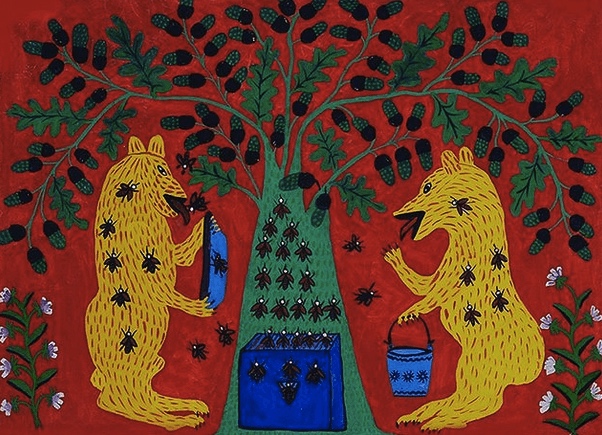 Did you know of these Ukrainian traditional floral crowns?

The Ukrainian Ministry of Foreign Affairs has confirmed that twenty-five paintings by the Ukrainian artist Maria Prymachenko were burned in the Local History Museum of Ivankiv, a city near Kiev which was allegedly subjected to Russian bombardment. Maria Prymachenko was internationally recognized as a representative of naïf art.

According to Wall Street International Magazine, Maria Prymachenko won a golden medal at the Paris World Fair in 1937. It is also said that upon seeing her work in Paris, Pablo Picasso said “I bow down before the artistic miracle of this brilliant Ukrainian.”

The destruction of the Ukrainian cultural heritage by the Russian occupiers is a crime that will never be justified and forgiven.

The National Museum of Ukrainian Folk Decorative Art in Kyiv, home to hundreds of her works (including paintings, ceramics, and embroideries), has expressed its sadness and anger at the news in a Facebook post. “This is painful news for all admirers of the genius of the Ukrainian people — Maria Prymachenko, who left us a legacy of priceless works, from which we still draw inspiration and wisdom.”

The Ukrainian authorities gave the news through Twitter, although some Ukrainian media confirmed that part of the works managed to be saved from the fire. A reference of naïf art, the artist who died in 1997 was one of the most famous painters in the country and 2009 was declared by UNESCO as the year Maria Prymachenko.

Known for her richly colorful depictions of mythological creatures and picturesque images of everyday life of Ukrainian peoples, Prymachenko is considered a landmark artist of the country. She gained international recognition and her art has appeared on postage stamps and other mass-circulation media.

The Ministry emphasized the importance of the artist in Ukrainian culture and noted that “her special talent even captivated Pablo Picasso”. Some videos circulating on social networks show the Ivankiv Museum of Local History and History in flames. Emine Dzheppar, Ukraine’s deputy minister of cultural affairs, posted images of the burning museum. It is unclear whether other objects were lost during the shelling.

The artist, born in Bolotnya in Ivankiv, had no formal training in art and was characterized by her self-taught nature. The folk art created by Pryimachenko was inspired by Ukrainian landscapes, myths and folk legends.

Maria Pryimachenko’s works were exhibited in Paris, Beijing, Warsaw and other cities of the world. Also in Moscow and Leningrad. During a period of study in Kiev, Maria met a young officer, whom she soon married. Soon after, the war (World War II) began and the young man was called to the front lines, where he lost his life prematurely. At that time, Maria stopped painting. The fantastic animals stopped visiting the artist, as did her magical flowers. She did not touch a painting for 20 years

The artist, who won the National Prize of Ukraine Taras Shevchenko, explained her paintings as follows: “I paint flowers, since I want to give joy and happiness to people, with the wish that all people love each other, so that they live as flowers do all over the earth”, reads a quote of hers.