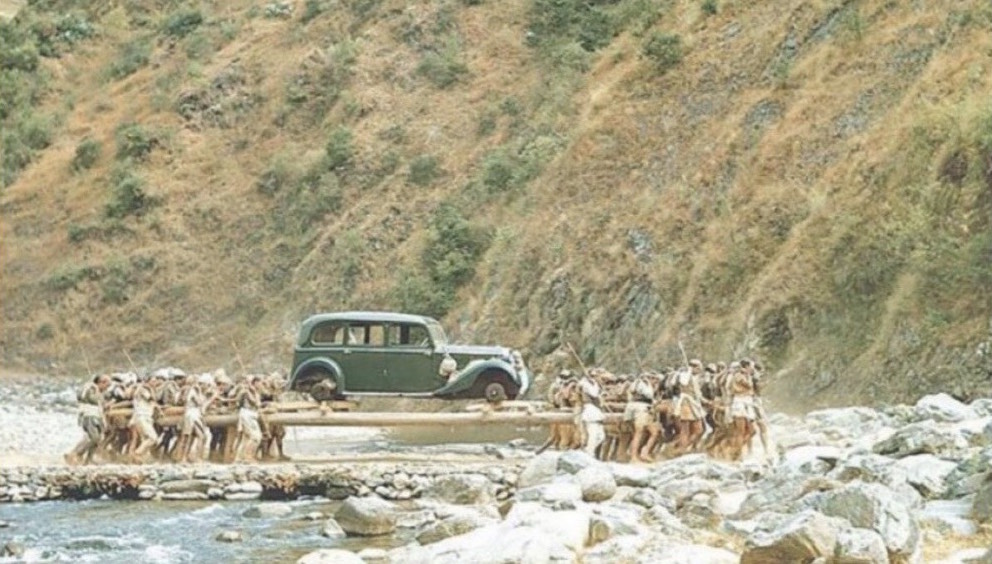 Paris to transform Champs Elysées into an ‘extroardinary garden’

It is a fascinating fact that the locals of Chitlang got a glimpse of the motor car before the people in Kathmandu city did, as the first car was carried into Kathmandu by an army of sixty porters in 1922. It was when Britain’s King Edward VIII (then crown prince) drove one on a hunting trip in the Terai, that the Rana rulers wanted motor cars for themselves, and the vehicles had to be physically transported by porters back to the Valley.

Debendra, founder of Chitlang Organic village Resort, loves to narrate the story of how the motor vehicles of the ruling Rana family were carried from Bhimphedi to Kathmandu via Chitlang. Many Nepalese visitors have absolutely no clue about the history of cars in Nepal. In fact, before cars carried people, people carried cars to Kathmandu.

Colonel William J Kirkpatrick was one of the many commuters who fell in love with Kathmandu valley at first sight from Chandragiri hill. He mentioned the beauty in his book, An Account of the Kingdom of Nepaul (1811). However, with the modern development and construction of roads and highways, the village of Chitlang, only 30 km away from Kathmandu city, was almost forgotten from the tourism map. For decades, the once thriving village rarely saw visitors passing by.

In 2010 Tourism became a key to bringing back the lost glory of Chitlang village, as locals of Kathmandu valley started exploring the village tourism destination which remained unaffected by mass tourism. As well as enjoying ‘Dal Bhat’ from locally grown vegetables and very modest accommodation, the visitors also come across a ‘Eureka moment’ with the Goat cheese from Chitlang, which is sought after in a few outlets in Kathmandu.

Mr. Ashok Thakuri is the ‘Cheese man’ who was trained in Belgium and France. He successfully produced goat cheese as a cottage industry. With the success of his cheese factory, he has also started a home stay business that looks to be the most comfortable in the village with an attached bath, solar heated showers and WiFi. It clearly indicated the growing demand for better accommodation and higher prices. Indeed, many of the group members on our tour did not miss the opportunity to buy cheese as the most precious souvenir.

The traditional houses in Chitlang village are spread out into pockets of different ethnic groups like Newars, Brahmins, Chettris and Tamangs. According to historians, King Amshubarma gave the land to shepherds and established a settlement for shepherds in Toukhel, Nhulgaun, Kunchhal etc. of Chitlang. Some historians believe that these people (Gopalis) are the descendants of rulers of the Gopal era. Chitlang also celebrates Newari festivals as Kathmandu valley does. The Kartik Naach, the dance performed in Patan, Kathmandu valley in October-November is undoubtedly the most popular one. A stone inscription in Majhgaon’s Ashoka stupa dates back to the Licchavi Era (between the 5th through 8th centuries AD), which further signifies the historic importance of the village.

Chitlang is perfect to describe the current situation of the tourism industry. An alluring destination which holds generations of culture. Regardless of Chitlang temporarily losing its attention due to the modernized ways, it has still claimed its beauty with time. Similarly, with the pandemic standing in the way of an entire industry, it is strongly believed that now is the hopeful time to breathe life back into tourism and experience the history, while creating another one in a sustainable manner.