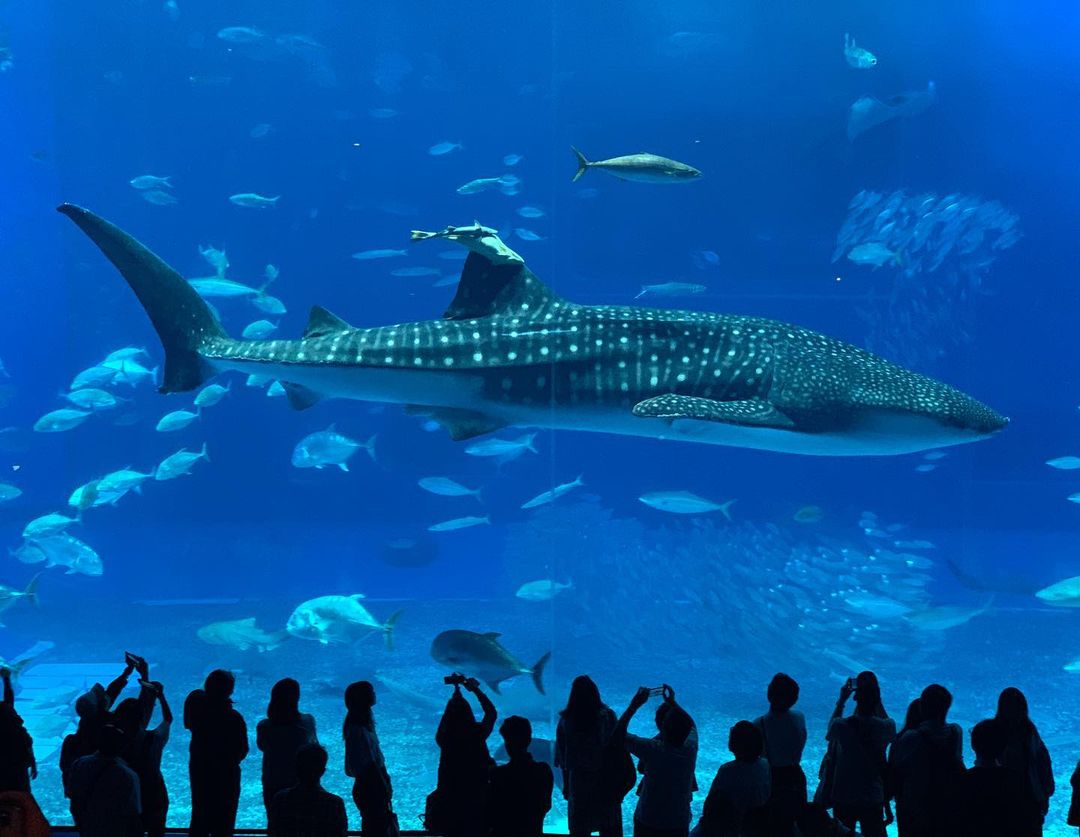 An oceanarium can be a marine mammal park or a large-scale aquarium showcasing an ocean habitat. You can watch marine animals of all sizes, and the bigger the aquarium the more animals you can see. As well as being a great place to see and learn about sea life and its habitat, oceanariums can also be run as a place of preservation for certain marine life, or to fund conservation projects in the wild. According to the Marine Bio Conservation Society, there are more than 200 marine aquariums and ocean life centers around the world, but today I will share with you just 10, the ones you must visit at least once in your life!

Located within the Ocean Expo Park in Japan, this Aquarium was the largest aquarium in the world until it was surpassed by the Georgia Aquarium in 2005. Okinawa Churaumi Aquarium houses 740 species and here you can also see the gigantic whale shark.

Dubai Aquarium & Underwater Zoo houses thousands of aquatic animals, with a total of more than 140 species including over 400 sharks and rays. Here you can also explore a creepy crawly zone as well as some intimidating snakes, but they have some cute animals too, like the charming penguins.

Situated in the dry Turia River bed of the Spanish city if Valencia, Oceanográfic aquarium was opened on 14th February 2003. It is home to more than 45 000 animals from 500 different species, including sharks, penguins, dolphins, sea lions, walruses, beluga whales, birds, reptiles, and invertebrates. The building itself is also a know attraction in the city thanks to its beautiful architecture, designed by architect Félix Candela and structural engineers Alberto Domingo and Carlos Lázaro.

One of the best aquariums in Asia and perhaps in the world is the  “S.E.A Aquarium”. This is home to more than 100000 marine animals, covering over 1000 species from across 45 different habitats. There are also some great children’s activities here, for example the Fun Academy where they can learn all about marine animals and ocean conservation. You can also enjoy the daily S.E.A show and there is a restaurant that serves delicious food.

This aquarium is located inside the immense Chimelong International Ocean Resort theme park in Hengqin (China), so after visiting the aquarium you can also go to the theme park if you like. This Aquarium set the Guinness World Records for having the world’s biggest underwater viewing dome and it is the world’s largest oceanarium with a total of 48.75 million liters of water.

Aqua Planet Yeosu was built in 2012 and this is South Korea’s largest aquarium. Here you can see a lot of different fishes, sharks, penguins and even dolphins, as well as attending an education session about marine life and ocean conservation. There are also of course some shows for visitors.

Georgia Aquarium is located in Atlanta, Georgia in the United States.  It was the largest aquarium in the world from its opening in 2005 until 2012 when it became the third-largest aquarium in the world, following the Marine Life Park in Singapore and the Chimelong Ocean Kingdom in China. It houses hundreds of species and thousands of animals across its seven major galleries, and you can see giant sharks which are amazing and very creepy.

Lisbon Oceanarium is located in the Parque das Nações which was the exhibition grounds for the World Expo of 1998. It houses 16000 marine animals and more than 450 species and is the largest indoor aquarium in Europe.

uShaka Marine World is situated in Durban’s Golden Mile in South Africa. It’s the fifth-largest aquarium in the world and won the Outstanding Achievement in thematic creative design Award in 2005 for its unique design inspired by five shipwrecks. Because it’s a theme park you can also enjoy visiting the others attractions including uShaka Wet’n Wild, uShaka Beach, uShaka Village Walk, uShaka Dangerous Creatures, and Chimp and Zee.

The Deep is situated at Sammy’s Point, at the confluence of the River Hull and the Humber Estuary in Hull, England. It was opened in March 2002 and boasts over 3000 creatures, including sharks and sawfish. In 2013, the aquarium was voted the best family place to visit in Hull and over eight million people have visited the facility since its opening.